Coronavirus information
The Zero Canada Project provides resources to help you make the most of staying home.
Visit the hub
Rachel Brady
Published July 31, 2020 Updated July 31, 2020
Comments
Please log in to listen to this story. Also available in French and Mandarin. Log In Create Free Account

When Kyle Lowry takes the floor in Orlando on Saturday night for the Toronto Raptors’ first game in nearly five months, his No. 7 jersey will read “Education reform” instead of his last name.

It won’t just be the first chance to see the Raptors battle LeBron James’s Los Angeles Lakers and resume their title defence after the pandemic-interrupted NBA season. It will also be the initial look at each Raptor wearing his chosen social-justice-themed message, as the league gives its players a chance to advance the global conversation about systemic racism.

The Raptors’ all-star point guard says he chose his message for kids like those in the rough North Philadelphia neighbourhood where he grew up.

Lowry was in the gym Thursday night at ESPN’s Wide World of Sports Complex inside the bubble for the opening night of the NBA restart as the Jazz, Pelicans, Lakers and Clippers all knelt during the anthem before their tip-offs, on a hardwood gym floor embossed with the words “Black Lives Matter”. He watched players, coaches and referees all lock arms as the NBA wholeheartedly supported their demonstration.

“I think it was beautiful. I think it was amazing. I think it set the tone for what we’re down here for,” Lowry said. “What was going through my head was justice for Breonna Taylor, George Floyd, Eric Garner, all these guys, all these Black human beings, Black men and Black women, being killed in cold blood. You know, that stuff hits hard and I have two young children and I would hate to have that happen to them or happen to me or anyone in my family or anyone I know.”

Lowry went on to speak of his education in Philly, when he didn’t learn all he feels kids should be taught about African-American history – things he will make sure his two boys understand. He hopes fans want to learn about why each player chose his message, and likes how all the teams are acting together on this.

“We’re all competitors and, yes, we want to beat each other,” Lowry said. “But at the end of the day we’re out here trying to get some social justice and trying to get things changed and keep the conversation going and doing more to make sure that the next generation doesn’t have to go through what we’ve gone through.”

Other Raptors messages include “Black Lives Matter”, “Speak up”, “Justice”, “See us” and “Say their names”. Serge Ibaka, who hails from Congo, chose “Respectez biso”, a French dialect for “Respect us”. He pointed to inequalities around the world, including violence against women, and disrespect for the poor and for immigrants.

“In the States you can see what is happening directly, how police is killing somebody. But in the Congo, in Africa, in all the countries in Europe, it’s happening, too, in different ways,” Ibaka said. “If we can win this fight here, we’re going to change a lot of things around the world.”

The Raptors, who gave kudos for the teams who have already knelt during the anthem, are likely to follow suit before their Saturday night game. Raptors coach Nick Nurse acknowledged that the pregame will have a slightly different feel since both The Star-Spangled Banner and O Canada will be played. The coach stressed that racism is not unique to the United States, and that Canada has work to do in that area, too.

Some worry that social-justice efforts will be upstaged or forgotten altogether by players and the public once NBA action intensifies.

“The league, the players, we say, this time is the time really to do it for real. Not just do it and then forget about it. To do it, and to keep doing it,” Ibaka said. “So what you saw [on the first night] is just the start.” 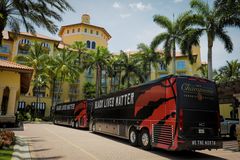 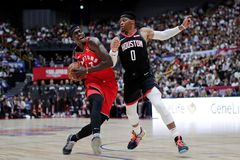