The visiting Sacramento Kings didn’t make it easy for the Raps to earn a 124-120 victory, keeping it a two-basket game until the end. Lowry led the way for Toronto with his 24 points, while Siakam added 23 and Serge Ibaka put in 21 off the bench.

OG Anunoby had a season-best 18 points and a career-best five assists. Marc Gasol’s 12 points was also a season high. Thomas added eight points, including a dramatic pair of fourth-quarter threes.

“The offence was great. I thought the offence, they kept playing next action, they kept taking what was there,” said Raptors coach Nick Nurse, who was particularly happy with his team’s 28 assists. “That was one of our better offensive nights, there was no real lulls in the ball sticking very much tonight.”

It is the first time in Lowry’s career that he has begun a season with six 20-point performances in the opening seven games. The veteran point guard is off to get another all-star start.

The team shot 55 per cent on the night, including 48 per cent from deep.

They began the night shooting a stellar 77.8 per cent from the field in their 36-point opening quarter. Hot three-point shooting from Fred VanVleet led the way, along with smooth finishes by Anunoby, while Gasol was dominating in the post. By half-time, the Spanish big man’s 10 points on 3-of-3 shooting had already matched his season scoring high.

Perhaps more important, Siakam did not earn a single personal foul in the opening half and just one all night. It was a significant response from the Raps star power forward, after coach Nick Nurse called him out in the media a day earlier for his early season pattern of fouling too early and too often, which was throwing a wrench into the team’s player rotations.

“I think it was a good step forward just making sure that I don’t get silly fouls and obviously just watching all that I’m doing and make sure that I get better,” said Siakam.

Staying out of foul trouble is especially important now, with Toronto taking a hit to its already thin depth. The team was without reserve guard Patrick McCaw in Wednesday’s game after he had surgery earlier that day to remove a benign mass on the back of his left knee. McCaw is out indefinitely – leaving the Raps to try to fill the 15 minutes he was playing off the bench each night.

Nurse continues to tinker with his young bench guys, waiting to see one set himself apart.

Nurse said Terrence Davis, Thomas and Chris Boucher would get bigger chunks of playing time while McCaw is out.

Yet it was Thomas who got the most playing time – 11 minutes, including some critical ones late in the game. He hit a pair of critical fourth-quarter corner threes on three shots, which provided two of the loudest moments inside Scotiabank Arena all night as the Raps battled to keep ahead of the narrowing Kings.

Davis had no points in seven minutes but tallied five fouls. Boucher had an assist and a block in five minutes.

The coach said he wants to keep at least two starters on the floor at all times. He must also avoid burning out Lowry and VanVleet, who are topping the NBA in minutes played.

The bench contributed 35 points to Sacramento’s 43.

Toronto allowed Sacramento to make it a two-basket game down the stretch – too close for comfort. The Raps were not happy that defensively, they allowed the Kings to hit 20 three-pointers.

“You give them credit. They made the shots when they had the opportunity,” said Lowry. “A lot of misreads, a lot of miscommunication but we’ve gotta continue to get better and grow as a team. We’ll take the win and figure it out and get better.”

A couple of Toronto natives were on Sacramento’s side. Former Raptor point guard Cory Joseph came off the Kings’ bench, and coach Roy Rana, who built Ryerson’s men’s team into a Canadian university powerhouse, and led Canada’s under-18 and under-19 national teams – is now an assistant on coach Luke Walton’s staff.

The Raps now play five in a row on the road versus Western Conference opponents, starting Friday at New Orleans. 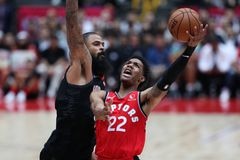 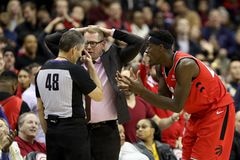