Jamal Murray believes they should be leading the Western Conference finals. They aren’t, though they say there is still a long way to go in the series.

If the Los Angeles Lakers don’t start playing better, the Nuggets might be right.

Outplayed for much of the past 1 1/2 games, the top-seeded Lakers look to regain control of the series when the teams play Game 4 on Thursday night.

The Lakers were careless with the ball and not disciplined enough on defence in Game 2, when they needed Anthony Davis’s three-pointer as time expired to avoid a loss. Instead of cutting down on their turnovers and fouls, Los Angeles repeated them in Game 3, helping the Nuggets build a big lead on their way to a 114-106 victory that cut the Lakers' lead to 2-1.

“It’s not going to be winning ingredients for us if we continue to do that and we knew that. Even after Game 2, we talked about that,” LeBron James said.

The Nuggets have been behind by two games in all three playoff series, so they were stung but not sunk when Davis denied them in Game 2. They came back and controlled much of Game 3 and responded with poise after their one faulty stretch, when the Lakers cut a 20-point deficit to three.

“This gives us that much more confidence going into this series, letting them know that we’re here, we’re in this for the long haul,” Denver coach Michael Malone said. “We’re going to continue to fight and do whatever we can.”

The Lakers easily recovered from their other two losses in the playoffs. They dropped Game 1 against Portland in the first round and won the next four. When they lost Game 1 again in the second round against Houston, they followed with six straight victories, so aren’t going to overreact to another defeat.

“We’re still up 2-1. We have control of the series,” Davis said. “We’ve just got to come out in Game 4 and play our style of basketball.”

But Davis acknowledged that his two-rebound performance Tuesday was “unacceptable,” and he noted the team mistakes that the Lakers didn’t clean up from the previous game. Los Angeles had a 16-point lead early in the second half of Game 2 and could have coasted to a second straight easy victory, but had to scramble at the end after finishing with 24 turnovers and 30 fouls.

The Nuggets then scored 25 points in Game 3 off the Lakers' turnovers – with James committing a game-high six of them in his 26th playoff triple-double.

“When you give up 25 points off 16 turnovers, that’s not good,” James said. "We did the same thing in Game 2. We had 24 turnovers and luckily it didn’t bite us in the butt, but it should have.

“We’ve just got to do a better job of that and it’s a conscious effort that not only starts with me because I’m the point guard of the team, and it trickles down to everyone else.”

Lakers coach Frank Vogel said Alex Caruso was getting an MRI exam on Wednesday because of wrist soreness and Danny Green hurt the ring finger on his left hand, but expects both to play in Game 4.

If the Lakers win it, they will be a victory away from their first NBA Finals appearance since their last championship in 2010, but won’t be able to get comfortable. The Nuggets overcame 3-1 deficits against both Utah and the Clippers, so they won’t be fazed by facing elimination. 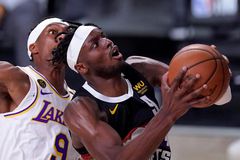 Anthony Davis shows he has what it takes for biggest stage of career
Subscriber content
September 21, 2020 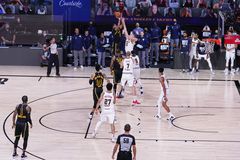 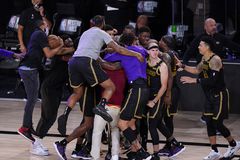