LeBron James wore a tailored, slim-fitting, grey designer suit and black-rimmed glasses. He wanted to make a strong impression on the first day of school.

After all, it’s his school.

Hoping to inspire and provide support to kids facing the same problems he experienced during a rough childhood, James officially opened the I Promise School, a cutting-edge centre built in a partnership with the NBA star’s family foundation and Akron City Schools.

As the Goodyear blimp soared over him, James reminded a crowd that included family, friends and fans who will now watch him play for the Los Angeles Lakers after four more mesmerizing seasons with the Cleveland Cavaliers, that he’s one of them.

Just a kid from Akron.

“I know exactly what these 240 kids are going through,” he said, referring to the third- and fourth-graders who comprise the school’s first classes. “I know the ups the downs. I know everything they dream about. I know all the nightmares they have, because I’ve been there.”

Long before he became a globally celebrated sports celebrity and three-time champion, James was a lost little boy growing up without a father and wondering where his life was headed. He and his mom, Gloria, struggled for years. There was little money and less structure.

They moved constantly, and there were long periods when James didn’t attend school — he missed 82 days in fourth grade — because Gloria didn’t have a car and there was no other way of transportation.

“We didn’t have stability day to day where I didn’t know where I was going to be living, so it was no way that I could even get there,” he said. “So, it was a surprise to me when I woke up and I was actually going to school. So, I just felt like every day I was just waking up and I had just a bunch of time of nothing. There were just a lot of empty days, empty nights and just kind of a no future thought process.

“I was just kind of living in the moment, so, that’s just how it was.”

His past is shaping the future for others.

James has modeled the school, and so many other education initiatives started by Michele Campbell, executive director of The LeBron James Family Foundation, to combat the obstacles he faced. He’s giving at-risk children, some with learning disabilities and others from broken homes, opportunities they couldn’t have imagined, including food and other amenities.

The I Promise School’s curriculum is centred around the foundation’s “We Are Family” philosophy, an encompassing approach that allows for student growth and family development. The school follows a non-traditional schedule with year-round programming and days that began at 9 a.m. and end at 5 p.m.

The school, which will expand to include grades 1-8 by 2020, also has a resource centre that helps families “navigate daily challenges and facilitate long-term planning,” and parents of I Promise students can earn their GEDs or high school diplomas.

It’s cutting-edge, daring and potentially a template for inner-city schools around the country. James has already seen success stories with kids who began in his I Promise program in 2011.

“I’ve had kids come up to me and say, ‘I was part of your program when you had the bike-a-thon and now I’m on my way to Akron U, or I’m on my way to Kent State,“’ James said. “And they just thank me and they thank us. They thank me for the structure and what we’ve been able to do for them. Like half the battle is the kids just having someone that they are like, ‘Oh, this guy believes in us.“’

With a crowd of roughly 2,000 gathered in front of the impressive brick school that’s not far from his alma mater, St. Vincent-St. Mary, James walked to the stage on Monday accompanied by his mom, his wife, Savannah, and 3-year-old daughter, Zhuri. As they slowly made their way along a tree-lined sidewalk with students, Grammy-nominated singer Tori Kelly sang a beautiful rendition of Leonard Cohen’s “Hallelujah.”

Moments later, James stood before people he has known all his life and asked for help.

“I want people to know that these kids still have the same opportunities as everyone else, and that’s what’s important,” James said. “Us as adults have a responsibility to not let these kids down . because those kids are our future.” 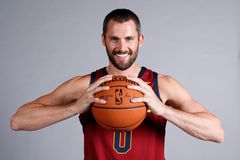 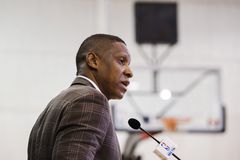 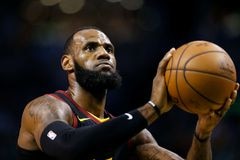