After a rough start to the season, the Toronto Raptors appear to be finding their way.

Kyle Lowry set the tone with 23 points Monday and the Toronto defence held Mavericks star Luka Doncic in check as the Raptors defeated Dallas 116-93 for their third straight win.

Toronto (5-8) held Doncic to 15 points, nine assists and seven rebounds as Dallas (6-7) suffered its third straight loss. Doncic, who made 4-of-11 shots, appeared upset about the attention he was getting from Toronto, with an elbow thrown in the direction of Stanley Johnson in the fourth quarter.

“I thought he was frustrated Everybody has a tough night. It happens to everybody,” said Johnson.

Fred VanVleet objected to Doncic’s swinging elbow, earning a technical for defending his teammate. While Johnson appreciated the gesture, he seemed unfazed by the incident.

“We’re playing basketball,” said Johnson. “We’re not going to give each other hugs. (Doncic) got me. It didn’t hurt. I just get on with it.”

Doncic came into Monday’s game fourth in the league in scoring (28.3) and second in assists (9.4).

Johnson and OG Anunoby defended Doncic for much of the night.

“I give those guys, both of them, a lot of credit,” said Toronto coach Nick Nurse. “OG and Stanley, I thought, took the challenge and worked at it. They really worked at it all night. They were just constantly there applying pressure I thought they both played with tremendous desire on (Doncic).”

Johnson said it was a team effort.

“It’s pretty easy when you go out there and you’re playing one guy with five guys,” he said.

“He really had a good one going tonight,” said Nurse.

Chris Boucher had 21 points, marking the sixth straight game – and eighth this season – that he has scored 15-plus points off the Toronto bench.

Pascal Siakam, who became more influential in the second half, had 19 points. Norm Powell added 17 points as the Toronto bench accounted for 55 points on the night.

Toronto’s defence stifled Dallas as the second half wore on and the Raptors pulled away after leading by nine going into the fourth quarter. It marked the first time in nine games Toronto had held the opposition to under 100 points.

The Mavericks, playing their second game in as many days, were missing Canadian Dwight Powell, Dorian Finney-Smith, Maxi Kleber and Josh Richardson, all out due to the league’s COVID-19 “health and safety protocols.” On the plus side, Tim Hardaway Jr., and Jalen Brunson both returned to the starting lineup – Hardaway after a one-game absence due to a groin strain and Brunson after missing four games due to health and safety protocols.

Norm Powell delivered a pre-game message on Martin Luther King Day thanking TV viewers “for tuning in to celebrate this amazing man’s life.” There were no fans allowed into Amalie Arena.

Mavericks coach Rick Carlisle didn’t last long. Irate at the officiating, he was ejected with 58.4 seconds remaining in the first quarter. Jamahl Mosley took over for him.

Thanks to a late 7-0 run, Toronto led 22-18 after a sloppy first quarter that saw both teams shoot 1-of-10 from three-point range. Porzingis (eight points) and Doncic (six) accounted for 14 of 18 points for Dallas in the quarter.

Doncic had nine points, five assists and seven rebounds in the half.

Toronto’s defence stiffened in the third, helping trigger a 20-6 run. Siakam found his rhythm, combining with Lowry for 21 points in the quarter, as the Raptors led 81-72 going into the fourth quarter.

Toronto entered the game ranked first in the league in three-pointers made (16.4) and attempted (43.9).

The Raptors, in the middle of a five-game stretch at Amalie Arena, were coming off consecutive three-point victories against the Charlotte Hornets, both of which went down to the wire.

The 21-year-old Doncic was coming off a 36-point, 16-rebound, 15-assist performance in a 117-101 loss Sunday to the visiting Chicago Bulls. It marked only the eighth 35-15-15 game in NBA history, joining Oscar Robertson (who did it five times), Wilt Chamberlain and James Harden.

It was also the 29th career triple-double for the third-year NBA pro from Slovenia, moving him past Michael Jordan into 15th on the league’s all-time list.

Monday marked the halfway point of six games in nine days for Dallas with Carlisle calling it “the most difficult scheduling of games in Mavericks history,” according to the Dallas Morning News. That stretch includes trips to Milwaukee, Indiana and San Antonio as well as Toronto’s temporary Florida home.

The Raptors host the Miami Heat on Wednesday and Friday before heading to Indiana for Sunday and Monday games. 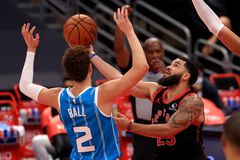 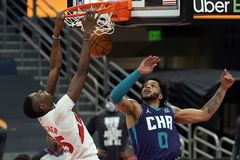 Raptors coach Nick Nurse says he has to do a better job keeping his mask on during games
February 1, 2021 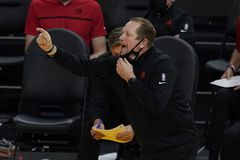