Hours after Magic Johnson abruptly resigned as the Los Angeles Lakers’ president of basketball operations and mere minutes after his first season as the franchise cornerstone ended with a buzzer-beating loss, LeBron James left Staples Center on Tuesday night without speaking to reporters, trailed only by security officers and questions about the team’s future.

It was not the season anyone envisioned for the Lakers, who had upended the NBA by signing James last summer with the hype and expectation of returning the franchise to its glory years. One of the most storied teams in the league, the Lakers have not won a championship in nine years, and Los Angeles is frustrated, hungry and impatient.

Instead, the team collected nearly as many injuries as losses. James, who will miss the NBA playoffs beginning Saturday for the first time in 14 years, watched the final six games of the season from the bench as the team looked to preserve him for next season. His next buzzy stop is a studio lot as the star of Space Jam 2, which he has said is set to begin filming this summer.

For the Lakers (37-45), all the drama was off the court, right up to the end, with Johnson’s abrupt announcement so out-of-the-blue that he had not even told his boss, team owner Jeanie Buss, before wading into a gaggle of reporters.

Johnson had sealed a US$154-million four-year deal for James, two greats fulfilling their needs, Johnson to restore lustre to a glamorous team, James to close out his career as a Laker and develop his business and entertainment interests centered on Hollywood.

And now they both left Staples Center with a losing record and a team in chaos.

In some ways, it was the perfect finale to a season that trafficked in dysfunction.

So there was the coach, Luke Walton, saying what losing coaches always say, essentially wait until next year. His job may have been saved when Johnson quit, but he would not talk about that.

“We have a lot of time to work and get better,” Walton said late Tuesday after the Lakers’ loss to the Portland Trail Blazers. “Let’s organize and prioritize what we need to do so we can give ourselves a better chance next season.”

It was a wasted season for everyone involved, and James is as polarizing as ever, even in Los Angeles, where as much as fans banked on him, they also retained a degree of skepticism that this was all real.

“Honestly,” Never said in a telephone interview, “Lakers fans are the trickiest.”

He had talked a restaurant owner in Venice Beach last July into allowing him to paint a mural of James in a Lakers jersey to commemorate his arrival, 75 cans of spray paint in 12 hours for the “King of L.A.”

It did not take long for the mural to be vandalized – not just once, but twice in a span of four days. The first time, it was salvageable. Someone had defaced the wall with the words “We Don’t Want You” and “No King,” along with “3-6,” a reference to James’s losing record in the NBA finals. But Never was able to restore the mural. (“A two-minute fix,” he said.)

The second time, someone splashed yellow paint all over James’s face, and Never had no choice but to paint over it.

“If it had been a car, it would have been totalled,” he said.

To be fair, most fans were excited about James. The news media coverage was breathless. And perhaps no member of the ticket-paying public had invested more in LeBron-to-L.A. than Jacob Emrani, a personal-injury lawyer from Beverly Hills, Calif., who had purchased space for 40 James-themed billboards in the run-up to free agency.

“I definitely didn’t think it was going to be something where we missed the playoffs or thought, ‘What the hell is happening here?’ ” Emrani said in an interview. “I’m disappointed in the breaks we got, but I’m not necessarily disappointed in LeBron. We were in fourth place when he went down.”

Emrani was referring to what might have been the season’s turning point, the Lakers’ ill-fated Christmas Day game against the Golden State Warriors, which James himself cited in a recent interview with Spectrum SportsNet, the Lakers’ broadcast partner. The Lakers were playing solid basketball at the time – in fact, they clobbered the Warriors to improve their record to 20-14 – but James injured his groin in the first half and wound up missing the next 17 games. The Lakers went into a tailspin without him.

“Disappointed in my body,” James told Spectrum SportsNet, adding: “Because I knew exactly where we were at that point. And we just were never able to get back from that.”

Once James returned, the team’s front office unsuccessfully tried to engineer a trade for another big star, the New Orleans Pelicans’ Anthony Davis – this, after James had told ESPN that it would be “amazing” to play alongside Davis.

The plan appeared to be to essentially trade away the rest of the team. The fallout was clear: Whatever fragile bonds that remained in the home locker room at Staples Center seemed to fray at the seams.

For many fans, it was impossible to dissociate James from the failed trade – James and Davis share an agent, Rich Paul – and much of the mess that followed.

“Nearly everyone on the roster was involved in those trade rumors,” Never said. “How can you really feel wanted if you think you’re going to be packing your locker the next day?”

As the losses mounted, so did the criticisms of James: that he appeared detached from his teammates, that basketball was secondary to his growing interest in his entertainment company, that his body was finally breaking down after so many years of athletic genius, that he was no longer capable of carrying a team to a title.

But in the 55 games that James did play this season, he was pretty good. He averaged 27.4 points, 8.5 rebounds and 8.3 assists a game while shooting 51 per cent from the field. Besides, a long summer may benefit him after so many extended playoff runs.

“The only thing that was hard was that he got hurt,” Walton said late Tuesday night. “It takes time to build a relationship with somebody. But as our relationship grew and I got to see what it was like coaching him, it was great. And I believe if we could have stayed healthy, we would have had a very successful season. He’s an incredible player.”

For his part, James told Spectrum SportsNet that he wanted to use the summer to get his body back to “120 per cent” before training camp – even as he moonlights on the set of Space Jam 2. He has been adamant that his work in entertainment will not interfere with his work on the basketball court.

The question is whether one bad season will become two. So much hinges on the summer as the Lakers look to add another star to their roster. (Emrani said he had plans for more billboards, though he declined to say which top-tier free agents he would target.) James has said that he will be as involved in the team’s recruiting efforts as possible.

“I’m looking forward to seeing who jumps in the car with me and wants to take this ride to the top,” James said in his interview with Spectrum SportsNet. “I know what I bring to the game. I know my commitment to the game. I’ve never cheated the game, and throughout my career, it’s always given back to me.”

Back in Venice Beach, Never painted a new mural during the middle of the NFL season, replacing LeBron James with Derwin James, a safety for the Los Angeles Chargers. The mural has been up for months, Never said, and no one has touched it. 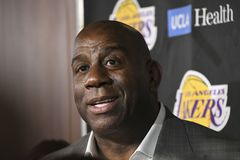 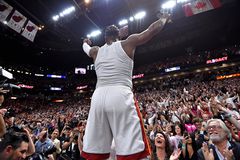