Bam Adebayo had 15 points and 14 rebounds, and the Miami Heat put together their best defensive performance of the season in an 84-76 victory over the Toronto Raptors on Thursday night.

Tyler Herro and Goran Dragic each scored 13 points for Miami, which is now 2-0 against the Raptors this season and improved to 9-0 after a loss. The Heat and Milwaukee are the only teams to not lose consecutive games this season.

Serge Ibaka had 19 points and 10 rebounds for Toronto. Kyle Lowry scored 15 points, Rondae Hollis-Jefferson added 13 and OG Anunoby had 12 points and 12 rebounds. The Raptors shot only 31.5% and were 6 for 42 from 3-point range.

That came after Miami had a long practice Tuesday, upset with how its defence was awful the night before in a loss to Washington.

There was a pregame tribute and moment of silence for former NBA Commissioner David Stern, who died Wednesday at the age of 77. Both the Raptors and the Heat were born under Stern’s leadership of the league.

“There probably is some serendipity to this game, to have the expansion of the league ... it’s a byproduct of his leadership and vision,” Heat coach Erik Spoelstra said.

Miami set a season-best for points allowed by a huge margin; the previous Heat low in that department this season was 94 against New Orleans on Nov. 16. Toronto’s previous season low for points was 88, in a loss to the Los Angeles Clippers on Nov. 11.

Anunoby was fouled on a 3-point try with 1:21 left in the third, making all three free throws to tie the game at 60. It was Toronto’s second time cashing in on such a foul in the game, after Lowry went 3 for 3 in that situation late in the first quarter.

But the Heat went on a 17-5 run in the fourth and held Toronto to 16 points in the final 12 minutes.

Raptors: Former Toronto and Miami All-Star Chris Bosh was seated near midcourt. ... Ibaka and Fred VanVleet combined to take 15 of Toronto’s first 18 shots. ... Toronto started 2 for 21 from 3-point range, before Anunoby connected on a corner 3 at the end of the first half. ... Injured Raptors Marc Gasol and Pascal Siakam are on the trip, but remain sidelined.

Heat: Justise Winslow (bone bruise in back) did some work a few hours before the game, but missed his 13th consecutive game. In his fifth season, Winslow has missed Miami’s first game of 2016, 2017, 2018 and now 2020. ... DJ Khaled and Diddy were seated near the Heat bench, while Future and Meek Mill were also courtside.

This was the 510th game of the NBA season, and only the fifth where neither team scored more than 20 points in the first quarter. And with Miami taking a 63-60 lead into the fourth, it became only the second game this season with teams at those totals -- the other was Charlotte leading Chicago 59-50 after 36 minutes on Dec. 13.

There were four technical fouls in the game -- leading to zero points. Spoelstra and Raptors coach Nick Nurse both got hit with techs (both resulting free throws were missed), while Lowry and Kendrick Nunn were recipients of a double-technical late in the third.

Heat: Visit Orlando on Friday, the first of four meetings between the in-state rivals this season.

David Stern left a wide legacy to the NBA but the global growth of the game was his biggest accomplishment
January 2, 2020 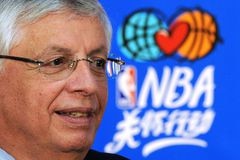