Nick Nurse isn’t shy to call out his players publicly when he doesn’t like their play. And it seems to be working pretty well for him.

Earlier this year, the Toronto Raptors coach complained about Pascal Siakam’s foul trouble and that promptly improved. At one point, he said none of his new players were stepping up to separate themselves and soon saw several young bench guys seizing opportunities. The latest example came this week, when Terence Davis absorbed a critique from Nurse one night and played a career-best game the next.

Davis, the Raps’ 22-year-old undrafted rookie guard, had a rough performance in Tuesday’s loss to the Portland Trail Blazers, going 0-for-2 from the field and having his minutes chopped down. Davis had turned over the ball six times in three games to that point and had shot a combined 4-of-13.

“He’s not playing very well,” Nurse said after Tuesday’s game when a reporter noted Davis had played only eight minutes. “It was probably five too many.”

Nurse said with a laugh on Friday that he doesn’t feel grumpier this season, although there have been more bumps in the road. Has publicly censuring a player, which attracts media attention, become part of his coaching strategy?

“I’m not sure I know they’re going to become stories," Nurse said. “Sometimes I’m maybe a little too forthright.”

The next night, Nurse gave Davis his first career start. He scored a career-high 23 points in Toronto’s 112-110 overtime victory over the Charlotte Hornets. He hit four three-pointers, added 11 rebounds, five assists and a steal in his 37 minutes and tenaciously defended Hornets star guard Terry Rozier. Davis said he had appreciated Nurse’s frank critique.

“My play was terrible so I think he was just saying for me to play better," Davis said. "That’s part of the game. I accepted the challenge. That’s what I like. I’m into it. All of my coaches have been that way – straightforward. I wouldn’t want it any other way.”

When Siakam was having foul trouble in November, Nurse told reporters “he hasn’t been really smart” and he wanted his star power forward to “knock it off.” Siakam said all he cared about was the coach’s conversation with him, not the one with reporters.

“I think for me the most important thing is as long as that same message is conveyed to the person. That’s what I care about. As long as you tell the actual person what is going on, it doesn’t matter what you tell the press,” Siakam said. “If face to face you said that, and that is how you feel, and you have those words, then you agree or disagree and do whatever you have to do to get better.”

Nurse was asked Friday if there’s an art to criticizing players to get the best out of them.

Siakam was back at practice Friday and talking to media for the first time since he suffered a groin injury Dec. 18 – the same night the Raps also lost Marc Gasol (hamstring) and Norman Powell (shoulder) to injuries. All three practised on Friday, albeit with limited contact. Medical staff have only cleared Powell to play in the Raps’ next game, Sunday night against the visiting San Antonio Spurs.

Siakam shed some light on his recovery.

“In the beginning, I wasn’t able to do anything because literally every single movement hurt. You can’t do anything – just icing it,” Siakam said of the stretched groin. “Then, once it got a little better, we were able to work on strengthening the glutes, hamstrings, hips, everything to build the power back up to make sure I’m stronger. So now, I’ve starting moving and doing things on the floor.”

Siakam said he does not have a return game pinpointed yet. Before the injury, he was averaging career-high stats, including 25.1 points, eight rebounds, and 3.6 assists. He said the most important thing in practice at this point is testing his explosiveness and lateral movement.

“I can definitely run straight on the floor, but the problem is figuring out if you can move and be explosive,” Siakam said. “I have to make sure I can be 100 per cent and do everything I’m capable of doing and everything that helps my game. Until I feel like that, we’re going to take our time with it.” 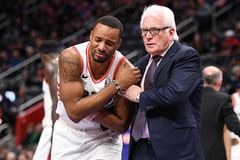 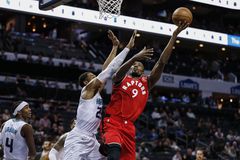 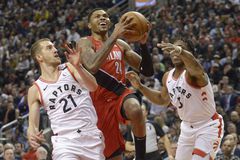