Kyle Lowry grinned and eagerly clenched the neck of his jersey as the final seconds of the Toronto Raptors’ NBA title-clinching game droned on through video reviews and free throws. He was visibly giddy waiting to exhale and begin the long-awaited celebration.

When that buzzer finally sounded to end his 13th NBA season and his sixth successive playoff run as a Raptor, the five-time NBA all-star became a first-time champion.

The quick-thinking Raps point guard chased down the game ball and hugged it close to his chest knowing the franchise will want to keep it.

Lowry is thoughtful that way. Earlier this year, he grabbed the game ball for Nick Nurse after his first game as head coach. Earlier in the playoffs, Lowry bought all of his teammates customized headphones as a gift to remember a special postseason.

It was the first time a Raptors season ended with Lowry smiling and being so widely praised and congratulated. As a team leader, he shouldered much of the blame when the Raps were eliminated in the past by the Cleveland Cavaliers, Washington Wizards or Brooklyn Nets.

Lowry was an undisputed rock in Game 6 against the Golden State Warriors. He had 26 points, 10 assists, seven rebounds and three steals. His plus-minus of 16 was the best of anyone on the floor.

Over the years, when Lowry missed game winners or shot poorly, it became the meat of headlines and social-media memes. His 0-for-7 performance in Toronto’s playoff-opening loss to the Orlando Magic this season triggered many of those criticisms.

Lowry had the game-winner on his fingertips in the final seconds against the Warriors on Monday in Game 5, which would have clinched the title in Toronto. It felt good leaving his hands, but Draymond Green got a hand on it and sent it wildly off course to force a Game 6 back in Oakland. That drew some more scrutiny Lowry’s way.

“The people that know me – my teammates, the organization – they know what I bring to the table and they appreciate what I do and what I’ve done,” Lowry said after the game. “I score zero points, people blah, blah, blah, I do this, I don’t score. I understand what people say, I hear them. But we win as a group, then that’s all that matters. Winning is all that matters to me. And I’m at the highest level, winning right now.”

Lowry does not drink, yet he made a brief stop inside the frenzied, deliriously happy Raptors postgame locker room Thursday night. Wearing red and black ski goggles, he gleefully sprayed champagne at his teammates.

In the manic back wings of Oakland’s Oracle Arena after the win, Lowry was moving in many directions – this way for a live news conference and that way for sit-down interview alongside Kawhi Leonard. Known for heckling his teammates during their live interviews, Lowry boyishly sidled into a seat alongside the reporters in Fred VanVleet’s news conference and solicited the microphone.

“Fred, how does it feel to be a world champion?” Lowry called out.

“It’s unbelievable to have guys like Kyle Lowry on your team who step up and go for 15 in the first quarter,” said VanVleet, smirking at Lowry as he answered. “But he should have had 50. But he slowed down, so I just wanted to come out there in the second half and bail him out and just try to help him for his legacy.”

Then the reserve point guard got serious for a minute about the criticism Lowry has taken from media and fans over the years.

“They killed my man all the time in the playoffs. He gets more slandered than anybody I’ve ever seen in the league,” VanVleet said. “So to have him be able to hold that trophy up tonight, that’s what means the most for us.”

Lowry has transformed from the famously grumpy player he was upon his arrival in Toronto for the 2012-13 season, determined to jump town at the first opportunity. He and DeMar DeRozan grew from acquaintances to best friends and became all-stars together.

When Raptors president Masai Ujiri traded DeRozan to get Leonard, Lowry needed time to deal with the emotions of seeing his friend shipped away. Putting that aside, Lowry knew the Raptors could be special with Leonard and was key to getting the superstar acclimated.

“When he made the trade as a friend of mine, my emotions was there, but I understood that I had to go to work and I still played for the Toronto Raptors,” Lowry said. “My job was to go out there and to be the best basketball player I could be. How I feel now is, we won the championship, I mean it’s a great feeling.”

Even after holding the Larry O’Brien trophy, Lowry was still absorbing his new reality as he met the media Thursday: “I’m still kind of in this moment of just like, ‘Is this real?,’” he said.

“It takes some purified professionals just to go out there and keep going and working and trying to get it done. I’m happy to be a part of that fraternity now, to say I’m a champion.” 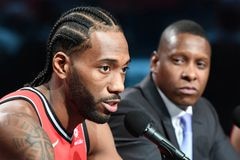 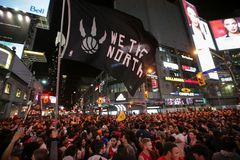