Even for an energetic wunderkind like Pascal Siakam — a rock-solid candidate for the NBA’s Most Improved Player award — big playoff minutes can be tiring.

On Saturday afternoon, the 25-year-old Raptors power forward addressed media at an Orlando hotel, admitting he was feeling some fatigue from the 41.5 minutes he’d played in the 98-93 Game 3 win over the Orlando Magic Friday night. He logged more minutes than anyone in the game, scored the most points (30) and had the best plus-minus (plus 13).

The lanky and athletic Cameroonian had 11 rebounds too, and four assists. He was the epitome of reliable, generating offence on a night when most other Raptors were shooting cold. In fact, reliable is exactly what he’s been all season — a constant presence in a starting lineup that was persistently in flux due to injuries and roster moves.

A glance at the post-season playing time in his brief three-year NBA career paints a vivid picture of his rapid rise. In 2016-17, he appeared in two playoff games for Toronto, averaging five minutes. Last season, he averaged 17.9 minutes over 10 playoff games off the Raptors’ bench. This year — now a starter and bonafide rising NBA star — Siakam is averaging a whopping 40 minutes as his team has built a 2-1 lead in its first-round series.

Siakam is averaging more playing time than all other players in this NBA post-season, except for Paul George of the Oklahoma City Thunder (41.7 minutes per game).

The Raptors opted for a day of rest, athletic therapy and film study on Saturday at the resort hotel where they’re staying, instead of a formal practice before Sunday’s Game 4. Siakam says a year ago, as a member of today’s ‘Bench Mob’, on a playoff rest day he would have taken the optional time in a gym, putting up extra shots. Not this year.

“Now when you play that many minutes you understand that there are certain things you can’t do,” said Siakam. “I can go to the weight room and try to get some weights up a little bit. But rest, treatment, whatever I can do. It’s about getting a little smarter with how I want to work and not over-work.”

Siakam, who had been a little-known 2017 late-first-round draft pick out of New Mexico State, has impressed the Raptors staff with how he has handled the increased workload this season.

“He’s young and riding a wave right now,” said Toronto Raptors Coach Nick Nurse. “I bet he’s not that tired. I bet he’s enjoying this and I think he’s got plenty of energy.”

Siakam had perplexed the Magic by imposing his will, dribbling as if undaunted to the rim — something Orlando hinted they may adjust for Game 4.

“He was terrific,” admitted Orlando Magic Coach Steve Clifford after Game 3. “He’s gotta know that he’s not going to be allowed to dribble the ball five, six times, before we get to him.”

Could that mean Orlando would try double-teaming Siakam when they already have Toronto superstar Kawhi Leonard to worry about? The likeable Cameroonian shrugged and giggled sheepishly at the suggestion they may scheme to double-team him.

Toronto’s coach wasn’t so certain Orlando would try to employ that tactic on Siakam. Dedicating extra resources to Siakam would leave too many other dangerous Toronto players open.

“It’s out of character for them to do that. They’ve got a defensive system that’s been in place and it’s a good one; it’s what they believe in. But, again, this is the playoffs and you’ve got to do what you’ve got to do,” said Nurse. “I’m not sure Pascal’s seen a lot of double-teaming this year and you’ve usually got to see that live to recognize it and how to play out of it… We’ll have to be ready.”

As Siakam played to his astonishing performance Friday night in Orlando, one of his detractors was in the crowd. Retired NBA player Tracy McGrady was attending the game, after recently debating Siakam as a candidate for the NBA MIP award on ESPN’s The Jump. McGrady had argued that perhaps Siakam hasn’t actually improved that much this season; he’s merely received more playing time and a chance to show it.

Media asked Siakam for his reaction to McGrady’s comments.

“Y’all trying to start something man? I don’t know nothin’ about that, I don’t know what happened. I don’t watch what’s going on, what people say,” said a chuckling Siakam. “I’m focused on this team and trying to come in here every night and do my best. For me, it’s not about who said what.”

Siakam, who had been discovered as a youngster in the NBA’s Basketball Without Borders program in Africa, says the attention he’s received is valuable for a different reason.

“I’m just blessed to be here, happy that I’m in this position, and people from where I’m from can look at me and hopefully dream that they can be here one day,” said Siakam. “That’s what’s important for me. That’s the message I’m trying to send every night I’m on the floor… Some kids or whoever can come see me and tell me, ‘Hey I’m watching you and your development and how you got here, and your story is an inspiration.’ ” 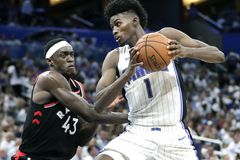 Inside the Raptors’ load-management approach to Kawhi Leonard’s season
April 18, 2019 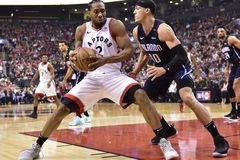 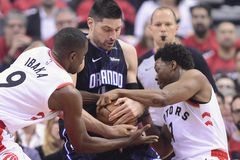