It was Siakam’s seventh 30-point game this season. The Knicks defence tried to keep Siakam outside, and he showed off the latest aspect of his ever-evolving game – a confident pull-up three ball. Siakam tied a career-best five from beyond the arc, on eight attempts from deep.

Coach Nick Nurse attributed Siakam’s shooting success to the fact that he likes to double the workload that the coaching staff prescribes him, to speed up his progress.

“That’s my mindset – I have to find a way to catch up to all the people that started playing when they were like five years old,” said Siakam, who didn’t start playing basketball until his late teens in Cameroon. “I have a long way to go, and every single day I know that, so I have to work double.”

Barrett received a warm roar from Toronto’s crowd when the hometown kid was introduced. During the night, in a series of videos running through the season to recognize Canadian-grown talent, the Raptors featured Barrett and another Knick, Lithuanian-Canadian Ignas Brazdeikis.

Barrett had some 300 friends and family at the game. Earlier Wednesday, he confirmed that he plans to play for Canada at the last-chance qualifier for the 2020 Tokyo Summer Olympics, a tournament slated for late June in Victoria.

“One-hundred per cent. Definitely plan on playing for my country this summer," said Barrett, the third overall pick in the 2019 NBA Draft. “I’m very proud to say that; I try to play every summer.”

Barrett – the son of Rowan Barrett, general manager of Canada’s men’s team – was part of a wave of Canadian NBA players who this week declared their hopes to play for Canada, such as Jamal Murray, Shai Gilgeous-Alexander and Nickeil Alexander-Walker.

Barrett, the 6-foot-6, 214-pound Duke product had 16 points in Wednesday’s game on 5-of-17 shooting, along with five rebounds and four assists. Raptors head coach Nick Nurse – also head coach of the Canadian men’s team – said he chatted briefly with Barrett while he was in town. Nurse was pleased about the number of players hoping to commit.

“There’s a number of really good players, and I think they should be proud to play for the team,” Nurse said. “It’s going to be a hell of a tournament out there in Victoria, a hell of an opportunity.”

Barrett came into Wednesday’s contest averaging 15.1 points a game in his rookie NBA season, along with 5.6 rebounds and 3.6 assists. Norman Powell chased him around defensively for much of the evening.

The Raps debuted their new Drake- and OVO-inspired black-and-gold City edition jerseys in Wednesday’s game. The team continued to have a lengthy list of injured guys on the bench in suits, from Kyle Lowry (thumb), to Serge Ibaka (ankle), Matt Thomas (finger) and Patrick McCaw (knee).

The visiting Knicks – who came into the night with a 4-13 record – leapt out to an 11-point lead in the first quarter, and lead by nine going into the second.

The Raps quickly pulled ahead and never looked back. The young bench once again bolstered the effort. Davis had a pair of threes, helped run the floor, and took his turn defending Barrett. Rondae Hollis-Jefferson added muscle and put-backs under the hoop on his way to a 12-point night. Boucher was patrolling the boards – nabbing seven of his 12 rebounds in the first half, while also scoring from deep. Malcolm Miller added 13, including four threes.

History was made on the court. For the first time, four Canadians were on the court at the same time in an NBA game – Boucher, Barrett, Brazdeikis, and Raps rookie Oshae Brissett, a Toronto native.

But Siakam was the star of the night. He displayed a flashy array of buckets to the delight of the crowd as he rolled for a 15-point second quarter. He hit his career high-tying fifth three-pointer of the night before the third quarter was even over, then rested down the stretch. The Toronto crowd serenaded him with MVP chants – a regular occurrence for the flourishing fourth-year NBA star from Cameroon.

Siakam scored on everything from long balls to dunks, tip-ins to jumpers. He was 12-of-22 from the field, with eight rebounds and two assists. Foul trouble seems to be a thing of the past – he had a single personal foul Wednesday. A fan in a red pepper costume broke into dance to celebrate the Raps’ forward they call Spicy P.

The Raptors improved to 13-4 with the victory. Next up is a trip to Orlando, for a Friday night contest against the Magic, before a three-game homestand back in Toronto versus Utah, Miami and Houston. 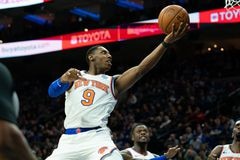 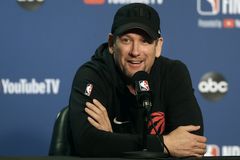 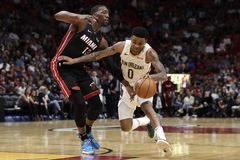