Philadelphia 76ers head coach Brett Brown is very sure “The Shot” does not haunt his dreams. He doesn’t wake up at night screaming, “It’s STILL bouncing.” He’s almost totally forgotten it.

Brown came out to take the predictable question before Monday’s Toronto Raptors-76ers game. He did protest too much, methinks.

You know and I know that when someone says “I really mean it” more than once, they probably don’t mean it. It’s more likely they mean the opposite of whatever “it” is.

You can imagine this from Brown’s and Philadelphia’s perspective. If The Shot had not gone in at the end of Game 7 of the Eastern Conference semi-finals, Philadelphia might very well be the team doing a victory lap around the league now. People would be talking about them as a potential dynasty. Brown would be a little happier and Joel Embiid would be truly unbearable.

In that moment, Kawhi Leonard didn’t just steal the 76ers’ thunder. He robbed them of their future.

Maybe that’s why the Scotiabank Arena crowd seemed so reluctant to rub it in. The Raptors didn’t replay The Shot during the prelims (though it’s also possible they weren’t in a rush to remind everyone about the guy who took it). The fans could only just barely rouse themselves to boo Embiid upon introduction.

In the first quarter, there was a video tribute to Dr. James Naismith, who has apparently just been placed on Canada’s Walk of Fame. I guess someone on the nomination committee came to work last June and said, “Crazy news, guys. Turns out we invented basketball."

Naismith’s grandson, Jim, stood up to take the round of applause on his grandfather’s behalf.

It could have been a “Ha ha, why you look so sad?” moment, but Toronto wouldn’t take it. There was only warm applause. Let me guarantee you one thing – if the roles were reversed, Philadelphia would have crowed. That’s what Philadelphia does.

But Canada doesn’t grandstand at someone else’s expense.

Instead, it has the Raptors to do that for it.

Toronto came into the contest preposterously undermanned because of injury. The 76ers rolled out what amounted to their full contingent. That included – unfortunately for them – Embiid.

You will remember him from last spring, mock airplaning into what turned out to be a playoff cliff-face.

One imagines he came back hoping to reclaim some dignity. Instead, Embiid was nullified by Toronto’s defence. He scored no points on many, many attempts.

If it’s likely that these teams will meet again in the 2020 postseason, perhaps now is the time to get Embiid set up with a grief counsellor. Those people book up fast.

Toronto’s patchwork squad swooped in and stole it at the end, 101-96.

According to Brown, Philadelphia didn’t come here looking for an exorcism. If he was fibbing about that, that makes the result even worse. The 76ers were supposed to loom over the Kawhi-less Raptors. Instead, they’re looking them eye-to-eye.

Once Leonard left, this was meant to be a regrouping year for the Raptors. The most likely outcome would be a chance to set the table for the young core of the future. Maybe win a playoff round.

They’ve been a little better than that.

Somewhere between Leonard’s coming and going, the Raptors organization has redefined itself as the best spotter of under-appreciated talent in the NBA.

The emblematic player in that regard is point guard Fred VanVleet.

With Kyle Lowry out, VanVleet has established himself in the top tier of NBA court organizers. He is top 10 in the league in assists and minutes played.

Lowry hasn’t talked since he got hurt a couple of weeks ago, perhaps because he realizes he’s been Wally Pipped. There was always going to be a handover from the older to younger man, but VanVleet’s emergence makes Lowry expendable in the short term.

Just about everyone else on the squad also qualifies as a sort of replacement killer. It’s been ages since Pascal Siakam was any sort of secret, but he continues to improve. He is becoming Kawhi minus the death stare.

This team is near the top of the Eastern Conference, imbued with championship swagger and likely to get better as the season progresses. Not bad for a rebuilding year.

Then you look over at Philadelphia with all its lottery picks and their endless work-in-progressness. It’s almost as if scouting is more than looking at the preseason mock drafts and saying, “That guy. The one everyone else likes.”

The Shot was luck – and skill, and nerves, and good planning. But mostly luck. Nobody plans for four dinks off the rim and then in.

But what the Raptors have managed since is not luck. It’s pure graft. This club has found a way to outsmart its rivals before anyone’s gotten on a court.

With cap space opening in a couple of summers, things looked good in the medium term before the season started. Right now, they look good in every term. No team in the NBA is better positioned to add to an already winning hand.

It’s funny how things can change in a few months without anything actually changing.

Last July, it was devastation. The country had been counting on Leonard turning the what had been the most unloved franchise in the league into a dynasty. Once he decided to leave, that was over.

Now it’s possible the Raptors might become a different sort of dynasty – a self-made one. 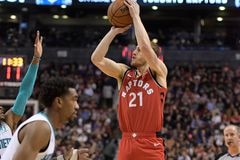