When the Toronto Raptors introduced newly signed C.J. Miles to the media back in July, Masai Ujiri grinned widely and said “we just signed a sniper, so we’re happy.”

Miles’s signing was the first tangible indication that the Raptors were moving swiftly toward a three-point-focused offence. The sort of sniper that the Raptors president had envisioned is coming into sharper focus now, when it matters most, in the playoffs.

Miles led the Raptors with four three-pointers made in both Games 1 and 2, helping the Raps to a 2-0 series lead over the Washington Wizards. Those eight threes rank the Toronto swingman fourth among all players in the NBA playoffs.

He struggled down the stretch of the regular season – converting only 32.7 per cent and 27 per cent of his three-point attempts in March and April, respectively. The full season was a little disjointed for him, as he missed 12 games for a variety of reasons – from the flu to dental surgery, gastroenteritis to a sore knee and a sore shoulder.

But he’s caught fire in the postseason, capitalizing on what the Wizards have left open, finding his opportunities beyond the arc and knocking them down at a clip of 61.5 per cent through the first two games of this series.

His threes have served as huge momentum-builders within the thunderous Air Canada Centre postseason environment. There was the fourth-quarter 27-footer he nailed off a pass from Lucas Nogueira in Game 1, which extended a tight four-point lead to a more comfortable seven-point cushion and had the Wiz motioning frantically for a timeout.

Then there was the deep 30-footer he hit in the fourth quarter of Game 2, with Wiz all-star point guard John Wall staring him in the face. Miles’s dagger promptly put a stop to an unsettling Washington late-game comeback attempt and had Drake flexing on the sidelines as Miles hollered in celebration.

“I’m always yelling after making a three, it does something great for my confidence, my team’s confidence, especially in those moments when I’m going into the game because of what they consider my expertise,” Miles said. “Defenders do such a good job of trying to stay with you and keeping you from doing it. So you’ve got to find the creases and take your shot.

“I get a rush from a big three-point shot, like the high flyers get from dunking,” Miles added. “Especially when you can make the other team have to call a timeout.”

The 31-year-old Dallas native, in his 13th NBA season, had been an average shooter for the first half of his NBA career – then in Utah – until he joined the Cleveland Cavaliers in 2012-13. Then Cavs coach Mike Brown encouraged him to hone his three-point shooting talent. He accepted the challenge. In the years since, he developed into one of the league’s elite three-point men, playing for Cleveland and then Indiana – even facing Toronto as a member of the Pacers in the 2015-16 playoffs.

Miles’s knack for knocking down deep balls in this series forces the Wizards into a pickle. The Wiz have focused on stifling Kyle Lowry and DeMar DeRozan, often double-teaming those all-stars. But Toronto’s other shooters are causing havoc from three – Delon Wright, Serge Ibaka, and especially Miles.

“There are areas now that DeMar is getting into where there’s so much respect for C.J. – and rightfully so – that he’s creating space,” Toronto coach Dwane Casey said. “That’s very important for us, for Kyle and DeMar. C.J. has given us exactly what we need. If he’s getting two people committed to him in a half-court setting, that helps us.”

While he does get minutes with some of the starters, he spends most of his playing time with the bench unit. As the oldest and most experienced NBA player of that young bunch, he has a sage presence.

“On the court, he’s a big-time shooter. He makes a defender think twice if he’s going to help off of him because it opens up the lane,” Toronto reserve centre Jakob Poeltl said. “ Sometimes he even draws two to him and I’m open for a slip or it opens up the lane for a drive. He’s been in this league; he’s done this for so long, his experience. Most of us young guys, we’ve barely played any playoff games. It’s not even that he just shares his experiences with us; he just knows what to do and leads us.”

Games 3 and 4 are Friday and Sunday in Washington, where knocking down three balls won’t earn Miles a deafening roar of support or that signature three-point air horn he’d hear inside the ACC. Instead, he’ll be looking to silence the room.

Casey feels Raptors are comfortable in the unusual role of playoff favourite
April 19, 2018 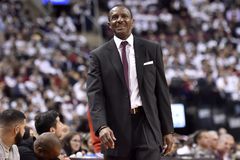 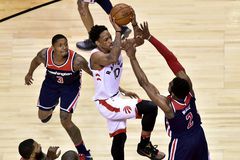 In Serge Ibaka, the Toronto Raptors have their big man for all seasons
April 17, 2018 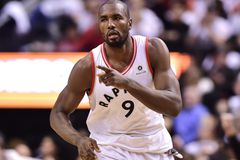