To what lengths would you go to watch the Toronto Raptors play live in their first-ever NBA Finals alongside two of your best friends?

Would you spend some 35 hours on transcontinental flights in a single weekend?

One diehard Canadian fan living in China flew home for just a day to watch his boyhood team take on the reigning NBA champion Golden State Warriors in Game 2 of the Finals on Sunday night in Toronto. He met up with two of his childhood buddies to watch the team they’ve followed feverishly for 24 seasons.

Rob Elliott, who was raised in Barrie, Ont., about 100-kilometres north of Toronto, lives in Shenzhen and works as a physical-education teacher at an international school. His whirlwind weekend trip back to Canada began on a ferry from Shenzhen to Hong Kong with a single backpack. Then he got on a plane to Taipei, then another to Toronto, where he landed Saturday night, 25 hours after leaving home.

The 38-year-old stayed in the Toronto area for only 27 hours, crashing for one night at his friend’s place, then watching the Warriors beat the Raptors 109-104 in Game 2 to tie the series 1-1. After the final buzzer, Elliott followed many fans on the walk from Scotiabank Arena to Union Station. Instead of hopping on the subway or Go Train like most others, he boarded an express train to Toronto’s Pearson Airport for a 1:45 a.m. flight back to China.

His flight was scheduled to land early Tuesday morning, in time to start the day with his elementary-school students in Shenzhen. He even planned to use the long flight to work on report cards.

“I know it’s crazy. But it’s a once-in-a-lifetime thing,” Elliott said. “With the uncertainty of Kawhi Leonard’s future in Toronto, who knows if this may ever happen again? I don’t really have a bucket list, but if I did, this would be the one thing on it – going to a Finals game with these two friends.”

Elliott went to Sunday’s game with Joel Wass and Pat Kelly, close friends since their school days together in Barrie. The Raptors’ inaugural season in 1995 had coincided with their first year at Barrie North Collegiate. The boys made the Grade 9 basketball team and were wild for the NBA, idolizing superstars such as Charles Barkley and Shaquille O’Neal. Seeing Toronto get its own team blew their minds, and so began their decades-long devotion to scrutinizing every game and every roster move.

Elliott and Wass both got tickets for Christmas in that 1995-96 debut season and watched one of the biggest moments of the Raptors’ early history, live. Inside what was then called the SkyDome (now the Rogers Centre), they saw the Toronto expansion team beat Michael Jordan and the eventual-NBA champion Chicago Bulls.

In 2000, the boys watched together in the Elliott family basement as Vince Carter annihilated the competition at one of the most memorable NBA All-Star Slam Dunk Contests ever staged. They marvelled at Toronto’s then-newly-minted all-star in his purple uniform, stunning the crowd with his array of dunks from a jaw-dropping reverse 360 to a between-the-legs bounce slam.

Over the years, as the three friends went off in different directions for school and jobs, they’ve remained in touch. Woven through their conversations about weddings, kids and life in group texts and e-mails, banter about the Raptors has been a constant.

Elliott and his wife, a librarian, have been living outside Canada for 12 years, working at schools in Mexico, Qatar and now China. He says time differences have never stopped him from watching the games on a live stream from abroad. His two kids, ages 5 and 3, are also becoming Raptors fans from afar, watching live playoff games on TV with him in the early morning or going through radio silence all day to watch a recording after school.

Some years, if Elliott’s family travels home for Christmas, the three friends attend an early-season Raptors game. Some of their milestone nights out have begun at Raps games, from birthdays to bachelor parties. But Elliott had never attended a Raptors playoff game.

After the Raptors acquired Leonard, the friends’ group messages kicked into overdrive as they watched the most elite talent in franchise history. Before the Raps clinched their berth to the Finals by eliminating the Milwaukee Bucks in Game 6, Elliott discussed the possibility with his wife as well as his boss of a trip to Toronto for Game 2 of the Finals. Both gave their blessings.

The school where he teaches would be done for the summer before Game 7 in Toronto, but Elliott didn’t want to risk the series ending sooner than that.

Elliott had his flight for Game 2 booked within 10 minutes of Toronto clinching. Wass undertook the pressure-packed duty of finding tickets. After scouring ticket websites with their long queues, Wass finally called Elliott in China one night at 3 a.m. They’d found three tickets, costing the guys $1,200 each.

“His loyalty to the team is incredible, and he was so gung-ho to make the trip,” Wass said. “It took 24 years to get here, and we will never forget this season. So we just couldn’t pass up the opportunity.”

Elliott declined to say how much the entire trip cost him, but said “it was worth it."

He doesn’t hear O Canada often in his daily life abroad, so he said standing among 20,000 Raptors fans singing it together before tip-off at the NBA Finals gave him goosebumps.

“I know that in 10 years I won’t notice the money as much as I’ll have this incredible memory.” 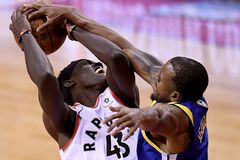 Steph Curry leads the way as Warriors even NBA Finals series with Toronto Raptors at 1-1
June 3, 2019 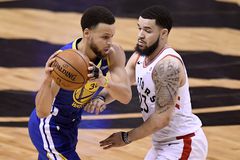 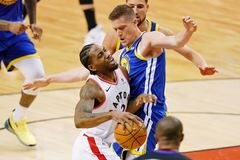