Fred VanVleet, an undrafted guard who famously said “Bet on Yourself,” shot his way into the record books Tuesday.

The fifth-year veteran put on a show with a franchise-record 54 points as the Toronto Raptors defeated the Orlando Magic 123-108. According to Elias Sports, it was also a record points total for an undrafted player — Hall of Famer Moses Malone had 53 against San Diego on Feb. 2, 1982.

The Raptors’ previous single-game scoring record was 52 points, set by DeMar DeRozan against Milwaukee on Jan. 1, 2018. Terrence Ross and Vince Carter each scored 51 in Toronto colours.

“Unbelievable. I’m very humbled and honoured to be in the same sentence as both of those guys (DeRozan and Malone),” said VanVleet. “Just a special night, obviously on a lot of different levels.

“I’m trying to enjoy it for now but it’s not a championship or anything like that. It was a good game for me. I’ll enjoy all the love for a couple of hours and get ready for the next one.”

He said his teammates were more excited than he was. Lowry, who made sure his teammate got the game ball, was all smiles after the game.

“You all know how I feel about him. That’s my little brother, man. I’m proud of him,” said backcourt partner Kyle Lowry, who quietly had his 17th career triple-double (his 15th as a Raptor).

“It’s incredible,” said Toronto coach Nick Nurse. “To be an undrafted guy and to do that. It really is incredible.

“He’s got a pedigree for winning, every team he’s been on his whole life … Just a tremendous competitor, worker, thinker.”

Listed at six foot one, VanVleet makes his living in the land of the giants. But the Wichita State product is hard-working, tough and fearless, negotiating his way through big bodies under the basket or putting up shots from distance.

“I just try to play the game the right way … You play with a pure heart and a clear conscience and a clear soul, then good things happen for you,” he said.

Away from the floor, the 26-year-old from Rockford, Ill., is one of the most thoughtful Raptors, well-spoken and insightful.

Betting on himself paid off last November when he signed a four-year US$85-million contract, another record for an undrafted player. Apparently he has made some big-ticket purchases.

“Look at the watch,” Lowry said as VanVleet followed him in front of the post-game Zoom availability.

VanVleet made 11-of-14 three-point attempts, coming within one of the franchise record of 12 by Donyell Marshall, in March 2005 against Philadelphia. In all, he made 17-of-23 shots and converted all nine free-throw attempts.

The points came naturally. VanVleet was in the right place at the right time more often than. And he took advantage in his 37 minutes on the floor.

“It was easy. No disrespect to the Magic but for most of those I was open … They were clean looks,” said VanVleet.

After three quarters, VanVleet was 11-of-13 from three-point range and had 46 points with teammates looking to feed his hot hand.

He added to his total with two free throws before hitting the 50-mark, cutting to the basket to haul in a lob from Lowry with 5:02 remaining. He tied DeRozan’s record after an Orlando turnover, running unchallenged for a layup with 4:445 left.

The record-breaking bucket came with 3:46 remaining, thanks to another Lowry feed. VanVleet cut into the paint, beating two men before making the layup.

“Congrats to my brotha Freddy V!” tweeted DeRozan. “Kyle old ass couldn’t do it. Glad you did champ! Been telling you!”

DeRozan also called VanVleet after the match to congratulate him personally.

VanVleet’s previous career high was 36 points, set last year against Miami. He is averaging 18.8 points a game this season and 11.1 a game over his career.

VanVleet erased his career mark of seven three-pointers made in a game before the first half was over, making eight-of-nine attempts en route to 28 points in the half. The eight three-pointers were also a franchise record for a half.

According to Elias, the last time teammates shared 50 points and a triple-double in the same game was Dec. 3, 2019, when James Harden (50 points) and Russell Westbrook (19 points, 10 rebounds, 10 assists) were members of the Houston Rockets in a game against San Antonio.

Evan Fournier had 21 for Orlando. Centre Nikola Vucevic recorded his 15th double-double of the season with 21 points and 18 rebounds.

It was the teams’ second meeting in three days. The Raptors ended a three-game losing streak with a 115-102 decision on Sunday in their adopted home of Tampa, leading by as many as 22 points.

Toronto was without OG Anunoby (calf strain) for the fourth game in a row. But Powell, who had missed the two previous games with a quadriceps contusion, returned to action and started.

The Magic came out hot, running up an 11-0 lead while Toronto missed its first seven shots before VanVleet ended the drought with a three-pointer.

“I knew after my first shot went in that I was going to shoot the ball well,” he said.

The high-flying Powell had a spectacular dunk in the first half — as well as an equally spectacular miss off the rim. Toronto clawed its way back and led 64-60 at the half.

Orlando started the second half with an 8-0 run to regain the lead. But Toronto turned it on late in the quarter with a 15-0 run to take control.

The Raptors have now won seven straight against the Magic including all four games last season.

Tuesday’s game at Orlando marked the start of six straight away games in 10 days, Toronto’s longest road trip of the first half of the season. Future stops include Brooklyn on (Friday), Atlanta, Memphis, Washington and Boston. Tuesday was also the start of nine of 10 games on the road.

Orlando hosts the Chicago Bulls on Friday and Saturday. 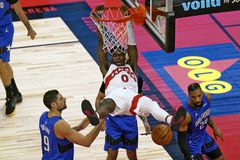 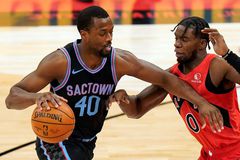 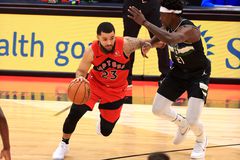