The Toronto Raptors took a beating on Monday night, as their new season continues to trend in a worrisome direction.

Jayson Tatum scored 40 points as his Boston Celtics punished the Raptors 126-114 in a game Toronto had lead early by 13 points. The Raps now have a 1-5 record in this perplexing season, putting them at the bottom of the Eastern Conference.

Fred VanVleet was a bright spot for Toronto, as he scored 35 points – including six three-pointers – and pulled in eight rebounds. Pascal Siakam had 22 points, and Kyle Lowry added 18.

It was the first meeting between the two teams since the Celtics sent the Raptors packing from the Orlando bubble on Sept. 11 after their thrilling, hard-fought seven-game playoff series. The Raps haven’t been the same since then.

To add insult to injury, there were many Celtics fans cheering among the few thousand at Monday’s game inside Toronto’s temporary Tampa home. Losing regularly like this is an unusual experience for several Raptors.

“This is probably unchartered territory for most of us, just speaking for myself I’ve never been a part of something like this but we can’t hang our heads, no one’s feeling sorry for us,” said VanVleet. “We’re not moving, we’re going to be here in Tampa, it’s not our home, fans are going to cheer for that other team and that’s the reality of the situation. So you can sit around and cry about it or figure out a way to work through it.”

This game didn’t have the same fire as the September encounters between Boston and Toronto.

Early on Monday, it looked like Toronto’s night. The Raps came out shooting hot, drilling a parade of three-balls and rollicking to a fast 17-5 lead.

Pascal Siakam – who had struggled recently and got benched in a disciplinary action last week -- got off to a hopeful start this time. Early in the first quarter, the All-Star forward hit a pair of three-pointers, dished out a trio of assists, was active on the boards and delivered a stunning look-ahead pass to OG Anunoby in transition.

VanVleet was absolutely cooking. He erupted for 14 first-quarter points -- including four buckets from beyond the arc -- to go with a crafty pair of steals.

The Raps built a 13-point lead and looked confident. They were up 32-23 going into the second quarter.

That’s when Boston snatched that lead from Toronto’s grip, just like several other teams have done to them so far in this young season.

Tatum, who had scored just five points in the first quarter, could not be contained in the second. When he wasn’t drilling threes, he was drawing fouls. His Celtics outscored the Raps 38-14 in the quarter, as the Raps struggled to finish at the rim – especially Siakam.

By half-time, Tatum already had 26 points to his name and Boston had a commanding 61-46 lead.

“Right now we have no swag to us,” said Lowry. “We’re just like that team that teams are looking at us like ‘alright let’s go eat’.”

As he’s done in each game so far this season, Nurse experimented with the Raptors rotation. He tried rookie point guard Malachi Flynn in the game early, letting him play alongside VanVleet, then gave him time with Lowry too.

He utilized Stanley Johnson early on for a fourth straight game. Chris Boucher played in the backup centre spot. Alex Len got some time at centre with the Raptors’ starters, to tangle with Canadian Tristan Thompson, a recent free agent signing of the Celtics. He gave Paul Watson a shot, and granted Terence Davis some significant minutes too, despite being critical of him before the game. Davis gave the Raps 13 points Monday.

Nurse said he’s been disappointed in Davis and Matt Thomas, who are good shooters but make too many mistakes defensively. The coach is dealing with a lack of size on his roster. His team isn’t guarding the ball well, and they’re being consistently out-rebounded (Boston grabbed 56 rebounds to Toronto’s 37 on Monday).

Siakam had flashes of his old “spicy” self, the most memorable one a flashy third-quarter running dunk. But mostly, VanVleet was shouldering the scoring load. The Raptors had opportunities, and the shots did not fall. The lack of toughness was confounding; the missed layups were maddening.

“That’s the salt in the wound when you really need a bucket and you get a clean look right at the front of the rim, and it rolls out,” said Nurse. “It hurts a little bit more.”

The Celtics were obliterating the Raps. Tatum continued his blazing hot play, Brown’s scoring picked up on the way to a 19-point night. An unexpected Celtic became a handful for Toronto too: rookie point guard Payton Prichard, who put up 23.

Late in the game, things got a little interesting. The Raptors’ bench cut Boston’s 26-point down to 10 points. Celtics coach Brad Stevens, who had retired his starters for the night, opted to call them back in.

The Raps and Celtics will met three more times this season.

“You usually get a chance to bond on a normal west coast early season road trip. But road trips now seem to be kind of their own bubble,” said Nurse. “I literally haven’t left the hotel on our road trips yet. It’s like, you go to a city and you stay in the hotel. It’s not like we’re going out and doing a heck of a lot of bonding.”

They all acknowledged there’s plenty of time to turn things around.

“I put my blood, sweat and tears into this and I care. So this stuff keeps me up at night, so it’s tough,” said VanVleet. “It’s tough to be in this position but we got a long way to go. We got a lot a lot of season in front of us, and we’ve got a lot of talent. And we’ve got guys that can figure it out, so we’ve got to stay positive and believe in ourselves.”. 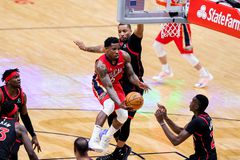 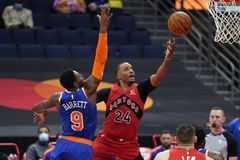 Raptors in ‘must-win’ mode as they face Knicks
Subscriber content
December 30, 2020
Follow Rachel Brady on Twitter @RBradyGlobe
Report an error Editorial code of conduct
Due to technical reasons, we have temporarily removed commenting from our articles. We hope to have this fixed soon. Thank you for your patience. If you are looking to give feedback on our new site, please send it along to feedback@globeandmail.com. If you want to write a letter to the editor, please forward to letters@globeandmail.com.
Comments