In a hotly anticipated battle between the top teams in the Eastern Conference on Tuesday, the Milwaukee Bucks got the best of the Toronto Raptors for a second time this season.

The reigning NBA champions saw their streak of high-scoring games come to a halt as they shot an anemic 35.2 percent from the field at home Tuesday in a 108-97 loss to the NBA-leading Bucks.

It was just the second loss for the Raps in their last 19 games. it snapped Toronto’s nine-game home winning streak.

Pascal Siakam (22) led six Raptors who scored in double digits. Khris Middleton had 22 in the Bucks win while Greek megastar Giannis Antetokounmpo had 19 points and 19 rebounds.

Fred VanVleet had 14 points, while Kyle Lowry had 10 as the backcourt mates combined to shoot just 7-of 26 from the field. OG Anunoby had 11 points.

Both teams were very defensively stingy. The Raps held the Bucks to 38.1 percent shooting – Antetokounmpo made just 5-of-14.

“Our defence was good enough tonight,” said VanVleet. “Our offence wasn’t. Sometimes when your offence ain’t no good you give up more points. That’s what happened.”

It was the first visit by the Bucks to Toronto since the Raps ended their 2019 season in Game 6 of the Eastern Conference finals.

“You always remember the last time you play here, the problems you had,” said Antetokounmpo. “It was definitely on my mind.”

Tuesday’s game marked the second of four regular season meetings between them this year. The Bucks took the first one in Milwaukee in November 115-105.

The Bucks had just flown in from Washington, where they played to a late overtime victory Monday over the Wizards. The Raps were fresh off a 127-81 thrashing of the Indiana Pacers two nights earlier – the largest margin of victory in club history.

Drake was courtside seat in Toronto for the marquee matchup, trolling the Bucks with a championship belt over this shoulder. TNT was courtside too.

Antetokoumpo was a rare visiting player to get a vigorous cheer from the Raptors crowd when he was introduced. Many fans dare to dream the Greek megastar might consider Toronto when his contract with the Bucks expires in the summer of 2021.

The two beasts of the east came out shooting ice cold Tuesday night. There were just two field goals made in the opening four minutes -- a three-pointer by Brook Lopez, then one by Serge Ibaka at the other end.

The early-game blunders began to subside. The Raps, pushed outside by Milwaukee’s defence, launched a parade of threes -- 17 attempts in the opening quarter, but just six makes.

Toronto’s biggest boost in the quarter came from young Montrealer Chris Boucher off the bench, launching what would be a 10-point, seven-rebound night for him. He hit a three ball and vaulted up over Antetokoumpo for an explosive put-back dunk. The slender Canadian youngster also stood strong in the key and drew a charging foul from the lunging Greek superstar.

Antetokoumpo wasn’t scoring much in that quarter, but his presence was felt. The high-jumping Buck blocked a Hollis-Jefferson layup, crafted three steals, divvied out three assists and grabbed five rebounds in the opening quarter alone. Yet the Raps held him to 1-of-4 shooting and took a slim 27-25 lead into the second.

So what’s changed since they met in the playoffs in May? The Raps are obviously without Kawhi Leonard, and playing a smaller backcourt now with Lowry and VanVleet. Marc Gasol -- who was a defensive monster in that series -- is still healing up from a hamstring injury. Norm Powell remains unavailable off the bench with an injured hand.

The game provided a chance for Nick Nurse to use players whose roles have increased since the Raps last met the Bucks in November, like Boucher. Rondae Hollis-Jefferson got a chance to help defend Antetokoumpo. Boucher helped on Lopez while adding big-energy buckets. Thomas hit a trio of second-quarter threes. Those bench players helped build a 12-point Toronto lead in the second.

Antetokounmpo had a bevy of crucial plays to help Milwaukee hack away at that lead – a big rebound, a block on Ibaka, a deep three, and a driving layup. The visitors trailed 52-50 at half-time.

Siakam and Anunoby stuck to the Bucks standout, but Middleton took on the scoring burden for Milwaukee in the third, propelling them into the lead. Shots clunked for the Raps all over the place. They were outscored badly in the third – 34-19. For the first time in a long while at home, it looked like the Raptors could lose.

Boucher once again provided a spark in the fourth quarter -- a big block on Antetokounmpo with the Raps trailing by seven. The stadium swelled with noise.

The Raps tried going back to hot-shooting Thomas. While the Toronto rookie three-point specialist had been mostly open earlier in the night, now Antetokounmpo was lurching at him and thrusting his long arms in his face as he lined up beyond the arc. Thomas missed his two attempts.

The Raptors starters came back in, but they couldn’t dig out. VanVleet hit a late three that provided brief hope for a comeback, but it never materialized.

The Raps took a season-high 52 three-point attempts, but only 18 fell.

For the first time since Jan. 12 versus the San Antonio Spurs – and just the eighth time this season – the Raps lost at Scotiabank Arena. Toronto falls to 42-16 with the loss, and Milwaukee improves to 50-8.

“Losses aren’t encouraging,” said VanVleet. “But we feel good about who we are. We kind of know who we are. I think our half-court offence has to get better. But yeah, I like our chances.”

The two Eastern Conference powers will meet again right at the end of the season, April 1 in Milwaukee and April 3 in Toronto.

The Raps will wrap up their current four-game home-stand Friday night against the Charlotte Hornets. 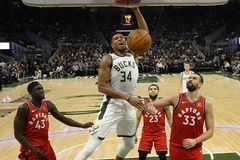 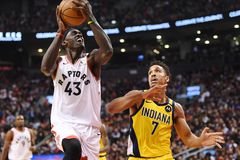 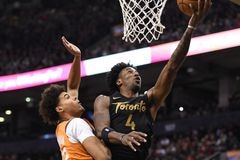