Tampa
The Canadian Press
Published May 16, 2021 Updated May 16, 2021
Comments
Text Size
Please log in to listen to this story. Also available in French and Mandarin. Log In Create Free Account

It was a bizarre season that in the words of Fred VanVleet “sapped the soul” of every member of the team.

The Toronto Raptors’ season, a campaign spent thousands of kilometres from home and thwarted by COVID-19, came to an end – finally – with a 125-113 loss to Indiana on Sunday.

The Raptors had been counting down the minutes.

“I think we all kind of want it behind us,” VanVleet said. “It’s kind of like a blowout game ... when you get blown out by 30, and the fourth quarter is taking all day, there’s media timeouts, some dumb coach calls a timeout and draws up a play with 30 seconds left, that’s what these last few weeks have felt like.

“Just trying to get through it, trying to put it behind us, so that way the hope is that going forward we have something to look forward to.”

Malachi Flynn scored a career-high 27 points to lead the Raptors (27-45), who finished 12th in the Eastern Conference. Stanley Johnson had 24 points, Khem Birch had 16 points and 14 rebounds, and DeAndre’ Bembry added 23 points.

Seldom-used big man Aron Baynes had 14 points and 10 rebounds for the Raptors, who used just six players in their 38th different starting lineup of the season, second only to Houston.

Canadian Oshae Brissett, a former Raptor, scored a career-high 31 points for the Pacers (34-38), who finished ninth in the East and meet Charlotte in a play-in game on Tuesday.

“I’m actually really proud of how we navigated things. I really think the team has performed,” Nurse said before the game. “It certainly was entertaining. We were a million miles away roster-wise on some of these games and we still found a way to play really well and together.”

Canada’s COVID-19 border restrictions forced a last-minute move to Tampa for Toronto, the only team that had to play outside of its market.

The Raptors scrambled to find living arrangements. Their practice court was a hotel ballroom. Crowds at their “home” Amalie Arena often rooted for the visitors.

Still, they were in the thick of the playoff race before a COVID-19 outbreak in March sent them into a tailspin down the conference standings. They went 1-14 that month, and never recovered.

“I would say that there’s some hunger and desire for us to get started on next season fairly quickly,” Nurse said. “I think that the adversity that we faced this year probably fuels a lot of that.”

VanVleet, who’s been hampered by a hip injury for weeks, said he never felt fully recovered after his bout of COVID-19 in March.

“I didn’t have one injury before COVID and I’ve been fighting to get back ever since,” he said. “There’s certain aches and nicks and things that just feel different since I’ve had it ... we’ll see, nobody knows –the world in general – especially at this level of competition, I think all the professional athletes dealing with COVID are gonna be the first to see how it affects us moving forward.”

The Raptors, whose last game at Scotiabank Arena was Feb. 28, 2020, played 36 “home” games at Amalie Arena. It’s the most by a displaced team since hurricane Katrina forced New Orleans to play 40 games in Oklahoma in 2005-06.

It’s still not a given that the Raptors will be able to start next season back home in Toronto.

“We miss Canada more than words can say,” said VanVleet, who joined the TV broadcast for the third quarter Sunday. “We miss our fans. We miss Scotiabank Arena. We miss living in Toronto. Hopefully we’ll be back soon and we’ll be right back where we left off next year. It will be like we never left.”

Raptors management will remain in Tampa through the NBA draft in July, owing to border restrictions.

Asked to describe the season in a word, VanVleet said “inconsistency.”

“That’s in schedule, that’s in the world, that’s in play, that’s in health, everything, emotions, everything. There was no continuity whatsoever from start to finish,” he said. “Humans are simple creatures. We need a schedule, we need to follow certain routines, and it was just up and down, we were playing catchup from the start of the season.

“You start 2-8 and you’re climbing up hill the rest of the way and you finally get up to where you can breathe and then everybody gets COVID and then you’re right back to where you were.”

Now, two years removed from their thrilling run to capture the Larry O’Brien trophy, the Raptors disperse for their longest off-season in years.

The biggest off-season questions concern the future of the two faces of the franchise: team president Masai Ujiri and veteran guard Kyle Lowry. Ujiri is the final year of his contract and has yet to sign an extension.

“He’s been the focal point of everything that’s Toronto Raptors ever since I’ve been here,” VanVleet said. “Kyle Lowry is obviously the greatest Raptor of all-time and No. 2 might be Masai.”

Lowry didn’t play Sunday, so if he signs elsewhere in the off-season, his season-high performance – 37 points and 11 assists – against the Los Angeles Lakers on May 3 will have been his final game as a Raptor.

Lowry will leave a lasting legacy in Toronto.

“Kyle is the ultimate leader,” said Chris Boucher. “He can kind of bring the dog out of anybody.”

OG Anunoby hopes the Raptors will be that much better next season for the adversity they faced.

“I think we all grew this season,” he said. “Everyone in the league had to deal with it but I guess us a little more because we got displaced. Just getting to Tampa and getting adjusted and then finding our way a little bit and then having the COVID outbreak and then just trying to fight our way back, just learning from it all ... we are all probably going to be better.”

The short-handed Raptors held their own through the first quarter Sunday, and trailed 31-30 heading into the second.

The Pacers broke the game open with a 16-6 run late in the second quarter that had them up by 16. Flynn sliced the difference to 68-55 with a three-pointer three seconds before the halftime break.

Flynn had three three-pointers and 13 points in the third, and the Raptors trailed Indiana 94-83 with one quarter left. 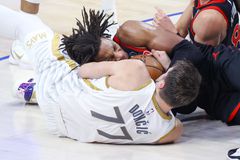 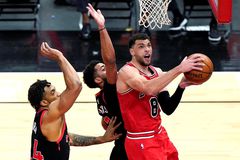 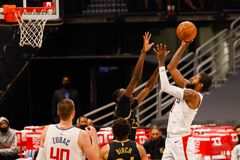