If they take those steps, he says, Africa could experience a sports boom that would galvanize its economies. A new African basketball league, scheduled to begin in March with the NBA’s support, is just the latest in a renaissance that he envisions as someday including new soccer leagues, too.

“Sports is the next big thing in Africa, and I think investors here need to pay close attention to sports,” Mr. Ujiri told an African investment conference in Johannesburg in Monday.

“The talent is like gold and diamonds on the continent,” said Mr. Ujiri, who grew up in Nigeria and returns to Africa every summer to train young basketball players.

“We need to invest in sports. This should be the biggest ecosystem, creating jobs and helping our youth.”

Mr. Ujiri brought the NBA championship Larry O’Brien Trophy onto the stage at the Africa Investment Forum for hundreds of business leaders to admire – and then urged them to invest in the new 12-team Basketball Africa League, whose teams are currently being chosen in qualifying tournaments. The league will be “spectacular,” he said.

“With all the talent we have on this continent, we should have everything they have in the NBA and [English soccer’s] Premiership,” the Raptors president said.

But for this expansion to work, African politicians must take sports seriously, he said.

“I challenge the presidents to build arenas, support sports and please: no cabinet reshuffles where you take the agriculture minister and put him in sports when he doesn’t know anything about sports,” Mr. Ujiri said, provoking laughter from the audience.

“If you bring in somebody who doesn’t know anything about sports, it’s hurting the youth of Africa. Bring in a sports expert to be the sports minister. Please, please, I’m begging all the presidents, please put experts in sports.”

In an interview later, he also insisted that Africans need to stop “dancing around” the subject of official corruption. “We have to call it out, exactly how it is, and the good people have to come to the front,” he said.

“We have to face it fair and square. If not, those few people will continue to dominate us, and we don’t want that.”

In a 2016 documentary film about his Giants of Africa training camps for young basketball players, Mr. Ujiri is shown in a profanity-laced outburst about “ego and bribery” in Nigeria. He was angered by local officials who had locked the doors and refused to allow his young players into a gym that had already been rented for them.

“Change this country,” he tells the young Nigerian players in the documentary. “You have to grow up and be better. Make a difference in this country. You have to be honest, and you have to do good to people.”

It’s a message that he believes he can bring to young Africans through his long-running Giants of Africa program, which ran training camps in six African countries last summer – including Somalia and South Sudan for the first time, in defiance of armed conflicts in both countries.

“Otherwise, they’ll see all the little bad things that happen around them and they’ll develop those stupid habits.”

Over the past decade, the NBA has invested heavily in Africa, with a full-time headquarters in Johannesburg, a training academy in Senegal, an NBA Africa account on Twitter, and a new YouTube channel that highlights the performances of African players in the NBA. It has won strong support from former U.S. president Barack Obama, who will have a “big part” in the new African basketball league, Mr. Ujiri said.

All of this could be a major benefit for African economies as new arenas are built, he said. “Retail, restaurants, playgrounds – there are so many different things you can put around these spaces. It creates jobs and an atmosphere. And huge branding opportunities.”

He noted that Africa has the youngest population in the world, with a median age of barely 19. Its youthfulness can create a greater potential market for sports than other regions of the world might have, he said. 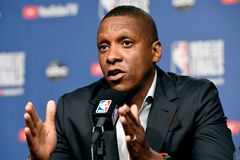 Raptors president Masai Ujiri says basketball has been a breath of fresh air in Somalia
August 27, 2019