The Toronto Raptors have posted the best win percentage in team history – an accomplishment never envisioned when the reigning NBA champs lost Kawhi Leonard and Danny Green to free agency last summer, or when injuries ravaged their roster earlier this year.

The long-awaited playoffs are here. After wrapping up the last of their eight seeding games inside the NBA bubble on Friday with a 117-109 win over the Denver Nuggets, the Raptors closed out the regular season with a 53-19 record. They won a club-record 73.6 per cent of their games.

“A lot of guys stepped up. A lot of growth for a lot of players. I think our defence was great,” Raptors head coach Nick Nurse said. “There was a lot of resiliency considering we had a lot of injuries, too. It’s a joy to be around this team.”

The best-of-seven series between the No. 2-seeded Raptors and the No. 7 Brooklyn Nets opens Monday at 4 p.m. ET, with games every other day. Work productivity could take a dip for many Raptors fans next week as their team plays three weekday afternoon games.

While many supporters will complain about the Raps not getting any primetime TV spots next week, Nurse doesn’t mind the early start times in Orlando. It helps fend off the bubble blahs.

“Especially in this set-up, I think it’s better than sitting around all day,” Nurse said. “There’s not a lot to take up your time, sometimes. I kind of think it’s good.”

One perk of bubble life is that coaches can attend other teams’ games in person to do their playoff scouting.

To stay healthy, the Raps sat many key players in their final game, one that meant nothing to either team because both had already locked in their playoff seeds.

OG Anunoby, Serge Ibaka, Kyle Lowry, Fred VanVleet and Pascal Siakam all rested. Their only action was animated dancing and celebrating on the bench to cheer on their teammates’ dunks and three-point buckets.

Nurse said Ibaka and Anunoby, who were both experiencing knee pain, had clear MRIs and they expect to play Monday.

The Raptors went with the never-before-used starting lineup of Terence Davis, Matt Thomas, Norman Powell, Rondae Hollis-Jefferson and Marc Gasol for their matinee. Toronto trotted out every guy it could use, and Stanley Johnson led the team with 23 points while Paul Watson added 22. It was the chance for role players to prove they deserve playoff minutes.

Watson, in particular, has impressed coaches since the team arrived in Florida. “He’s pretty good. He can play. Talking about comprehending our defensive schemes, he’s done great; really good passer; worked on some of the mechanics of his shooting,” Nurse said. “He’s going to be part of our future from what I can see.”

Friday was the first opportunity for Nurse to comment on his lead assistant coach, Adrian Griffin, who got the head-coaching duties on Wednesday when Nurse stepped aside for a night. A day later, Griffin faced allegations of domestic abuse via a post on Twitter by his former wife. The assistant coach released a statement the same day denying the accusations.

“First of all, he’s a class individual: hard-working guy, obviously,” Nurse said. “I’ve known him for a long time and wanted to give him this opportunity to help his career professionally. The rest of that, as you know, he categorically denies all that, and we stand with him, and so does our organization.” 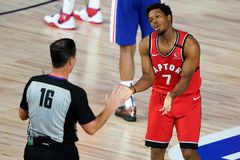 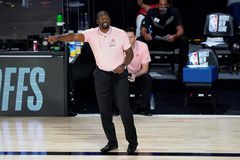 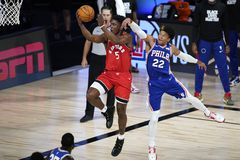