A nine-point outburst in the fourth quarter Sunday night was the punctuation mark on Norm Powell’s return.

Left out of coach Dwane Casey’s rotation last season, then sidelined with a shoulder injury for 21 games this season, the 25-year-old Powell had become virtually the forgotten man on the Raptors’ roster.

But Powell scored a game-high 23 points in Toronto’s 121-105 victory over Indiana, playing with a sense of confidence that was reminiscent of his excellent postseason contribution the Raptors’ 2016 postseason run.

“I feel really confident,” Powell said in the locker room after Sunday’s game. “The coaching staff is trusting me, I’ve talked to them, breaking down film and everything like that, and talking with me about finding my spots, to be aggressive and help the team, and where I fit in, so I feel good, going out there and seeing what the defence is giving me, picking my spots and finding the right reads. I’m playing off that.”

Powell has travelled a rocky road since he was acquired in a draft-night trade for Greivis Vasquez in 2015. He signed a lucrative US$42-million, four-year deal in 2017, but then quickly found himself the forgotten man in Casey’s rotation last season, losing his starting spot to emerging rookie Ogugua (OG) Anunoby and never quite finding his rhythm with the Raptors’ well-oiled second unit.

But he plugged away through the off-season with Toronto’s reserves, and he believes it’s paying off.

“I’ve always been a firm believer in hard work pays off, and your hard work’s going to show, it’s just a matter of time, as long as you stick with the process, stay positive and continue to work through whatever is thrown at you,” Powell said. “I just feels good, just continue to work, continue to stay focused on the task at hand, and do whatever it takes to get wins.”

Powell injured his shoulder versus Utah in early November, and his return comes when the Raptors truly need him. Kawhi Leonard, who missed most of last season with a quadriceps injury, sat out Sunday’s game for maintenance – the team’s leading scorer has yet to play in back-to-back games this season and his health is carefully monitored. Point guard Kyle Lowry is still dealing with a bad back that kept him out of 10 of 11 games.

Powell has had a handful of good performances since his return eight games ago, and when he scored his 19th point midway through the fourth quarter against Indiana, he reached a scoring mark he hadn’t seen since November of 2017.

“He’s been great, right? He was really good tonight,” coach Nick Nurse said in his postgame media conference. “I think he was 10-for-12, forget that. To me, he was guarding. Noticeably guarding and making life difficult for [Bojan] Bogdanovic, [Victor] Oladipo, all those guys, so that was kind of why I let him roll. I liked what he was doing defensively.

“It was nice that he chipped in 23 … but he just looks fast and fresh and athletic and strong and playing the right way.”

Powell was also a perfect 3-for-3 from three-point range.

And a night after the bench struggled mightily in Milwaukee, Powell led a Raptors second unit that outscored Indiana’s 52-27.

“It’s good to have him back, it’s good to see him back feeling good, playing good,” Fred VanVleet said of Powell’s return. “It’s nothing that we haven’t seen before, the guy’s a heckuva player who had a tough stretch last year, injuries, ups and downs, in and out of the rotation. It’s a new year so it’s good to see him back in form and how he’s been playing. We’re going to need him to continue to do that throughout the season.”

Powell’s wallowing on the bench last season gave fans plenty of ammunition to blame a “GoDaddy curse” after he did an advertising campaign for the internet domain registrar and web hosting company.

The previous season, Jonas Valanciunas struggled after doing a GoDaddy ad campaign. This season, it’s rotation player C.J. Miles, who’s averaging just 4.9 points a night – his worst offensive output since his 2006-07 season. Acquired for his shooting, Miles’s field goal percentage – 30.7 per cent – is the lowest of his career, and his three-point percentage (25 per cent) is his lowest since 2006-07.

The Raptors’ victory over Indiana kicked off a three-game homestand. They host Vince Carter and the Atlanta Hawks on Tuesday, then welcome the Brooklyn Nets on Friday. 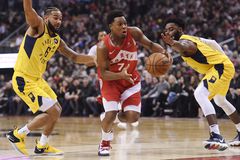 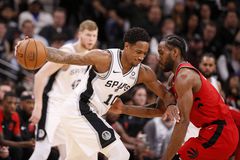 How to properly feed a hungry pack of Raptors
March 6, 2019 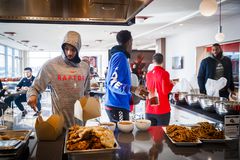