The Toronto Raptors sat one of their best players on New Year’s Eve as a disciplinary measure, but they finally got their first victory of the new season.

After losing their opening three games, the Raptors beat the New York Knicks 100-83 in Tampa Bay on Thursday, but they did it without Pascal Siakam.

Coach Nick Nurse would only say that Siakam’s benching was a “discipline thing for an internal matter.” Nurse would not elaborate on whether it was because the All-Star power forward headed for the locker room in anger after fouling out during the last minute of Tuesday’s loss in Philadelphia.

Siakam had started strong versus the 76ers and had a 20-point night, but scored just two points in the fourth quarter and fouled out with 25.6 seconds left in the game and Toronto down by five. Rather than going to the bench to support his teammates, cameras captured Siakam leaving for the locker room.

So what was the message the Raptors were trying to send by benching him?

“Just a certain way we want to do things and everybody’s got to be a part of that. As simple as that,” said Nurse.

Powell was outstanding in his first start of the season Thursday, giving the Raptors 17 points. He was aggressive right off the tip, scoring seven points in the first quarter and providing the first firecracker of New Year’s Eve with his second-quarter driving dunk.

“I see myself as a starter in this league,” said Powell. “So, you know, every time I get a chance to go out there and start it shows that I can fill that role and I try to take advantage of that.”

Powell has often had strong statistics throughout his career when given opportunities to start. His coach has taken notice.

“The statistics really bear it out. For sure. So I think it needs some evaluation,” said Nurse. “The only part that makes it tough is who goes out of the starting lineup?”

Nurse said he often thought about shuffling the starting lineup from game to game when he first became Raptors coach. He believes players like to hear their name called in pre-game introductions in front of a large home crowd, but that it doesn’t resonate the same way with stadiums mostly empty during the pandemic. He may consider varying his starters this season, he said.

The Raps led by four after the first, and the game was tied 42-42 at half-time. Unlike in the first three games of the season, when the Raptors got a lead, this time they held onto it.

Speaking with media on Thursday, the Raptors had used words like “tension” and “disappointment” to describe the mood within the team. They described their urgent desire to end the losing skid.

VanVleet said after that game that “losing three in a row is not acceptable around here,” and they felt they should have won all three of those previous games. He said one play by Lowry on Thursday really illustrated what the Raps will need to win this season.

“Kyle had a play tonight late in the game, crackback stealing the ball, jarring the rebound loose, it was not a 50-50 ball, it was an 80-20, 20 percent chance he got it, and he went and got it, and I don’t think we looked back after that moment,” said VanVleet. “So it’s those types of plays that you gotta imprint on this team and continue to make those types of plays and that’s what we needed to do to win. We’re not going to go out there and out-talent anybody this year, we’ve got to do the little things.”

Nurse singled out OG Anunoby, who may have only had five points in the game but “man, he was battling Randle all night long, did a helluva job and I told him so in the locker room after the game.”

As he has through three games, Nurse continued to tinker with Toronto’s rotation, and Raptors fans got to see a little more from the team’s new faces.

Alex Len got into the second half, and the seven-foot backup centre provided some inspiration in the third quarter as he nailed a trio of three-pointers, grabbed some rebounds and had a big block in an 11-point quarter.

In the closing minutes, Nurse was able to get Paul Watson, DeAndre Bembry and Malachi Flynn some time on the floor as well.

The Raptors bid farewell to a bizarre year that straddled two NBA seasons. Their 2020 began with so much promise, then included the death of an all-time NBA great and an unprecedented months-long stoppage of play. Then came a bizarre bubbled restart, time in the spotlight of a global conversation about racism, and a crushing exit from the playoffs. Then after a super-short off-season, they moved to Tampa and another peculiar new season began.

The Raps head back out on the road to face the New Orleans Pelicans on Saturday for a second time this season already. Then they will return to Tampa to host the Boston Celtics on Monday. 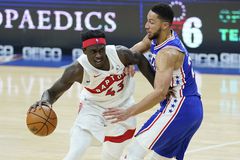 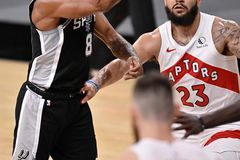