The Associated Press
Published May 29, 2021 Updated May 29, 2021
Comments
Text Size
Please log in to listen to this story. Also available in French and Mandarin. Log In Create Free Account

Bottled up in Brooklyn, Jayson Tatum came home and showed off an array of drives, step-back jumpers and 3-pointers.

When Tatum was done, he had one of the best playoff games in Celtics history – and the Nets had themselves a series.

Tatum scored a playoff career-high 50 points to carry Boston to a 125-119 victory on Friday night that cut Brooklyn’s lead to 2-1.

In an emotionally charged atmosphere with the fans booing and chanting at Kyrie Irving every time he was involved in something, Tatum became the sixth player in franchise history to score 50 points in a playoff game.

“We had a lot of guys step up tonight around Jayson being special,” Boston coach Brad Stevens said.

After scoring 50 points in Boston’s play-in tournament victory, Tatum struggled in the two games in Brooklyn but steadied the Celtics in Game 3 after the Nets shot out to a quick 15-point lead.

“He was just locked in mentally,” teammate Marcus Smart said. “We’re going up against a juggernaut of a team. Like I said before, the world knows it and we know it. It’s not going to be easy. You can’t lay down, you can’t take a step back. You have to be able to press forward and that’s what we did tonight.”

It was Irving’s first game in front of Boston’s fans since he left via free agency in 2019.

James Harden led the Nets with 41 points, Kevin Durant had 39 and Irving finished with 16 on 6-of-17 shooting.

“They made shots tonight, especially Tatum,” Durant said. “He hit some tough ones over us. I don’t think he made anything easy.”

Game 4 is set for Sunday night in Boston, where the Celtics will be allowed to have a near-capacity crowd in TD Garden when Massachusetts lifts the limits Saturday on crowd sizes due to the pandemic. It was limited to 25% on Friday.

Smart added 23 points for the Celtics, Tristan Thompson gave them a huge lift with 19 points and 13 rebounds and Evan Fournier added 17 points. Kemba Walker had a rough night, scoring only six on 3-of-14 shooting.

Irving was booed when he came out for warm-ups, during pregame introductions and each time he touched the ball, with those turning into loud cheers when he missed shots.

Things turned somewhat ugly when some fans briefly broke into a vulgar chant toward Irving a few times.

“It’s basketball. I’ve been in a few environments in my life,” Irving said. “Like I said, as long as it’s just strictly the nature of basketball out there and there’s nothing extra, I’m cool with it.”

Brooklyn cut a 16-point, fourth-quarter deficit to five with just under a minute left but Tatum nailed a step-back jumper from the top and Boston held on.

Tatum scored 11 points in the final 4:46 of the third, helping Boston turn a one-point deficit into a 96-84 lead entering the final quarter.

The Nets started fast, hitting 4-of-5 shots from behind the arc to pull in front 19-4 before Tatum sparked Boston’s comeback with 21 points in the opening half that carried the Celtics to a 61-57 halftime edge. Harden and Durant nearly matched him with 17 apiece.

Tatum returned to the lineup after playing just 21 minutes in Game 2 because he was accidentally poked in the right eye by Durant.

Spurred on by a raucous crowd of 15,743, by far the largest of the season in Atlanta, the Hawks pulled ahead 2-1 in the best-of-seven series. Game 4 is Sunday in Atlanta.

During Game 2 in New York, a Knicks fan spit on Young as he was inbounding the ball during the fourth quarter of a tight contest – one of three incidents in a matter of hours at NBA arenas across the country, renewing calls for increased security and other measures to deal with unruly fans. A total of five fans in New York, Philadelphia and Utah were banned from games for their misbehaviour.

The Clippers bounced back from two losses at home by withstanding a huge early surge by the Mavericks in front of their biggest – and loudest – crowd by far this season.

Dallas takes a 2-1 series lead into Game 4 on Sunday night.

Doncic fed the frenzy of 17,705 fans, more than three times the size of any crowd in a season that started with an empty arena, by making his first four shots, three of them 3-pointers, on his way to a playoff career-high 44 points as Dallas took a 30-11 lead.

Leonard made his first eight shots – three of them on the 14-0 run that quieted the crowd – and George scored 22 points before halftime on 10-of-13 shooting. Marcus Morris hit three corner 3s in front of the Dallas bench in the fourth quarter to help the Clippers stay comfortably in front. 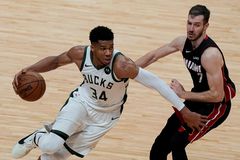 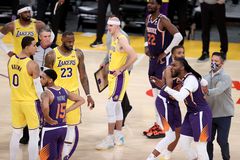 Clippers look to avoid another playoff meltdown against Mavericks
May 27, 2021 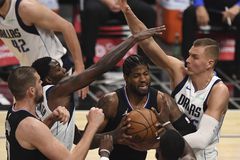