After they’d lost Game 2 of these NBA Finals, Toronto Raptors coach Nick Nurse gave what he thought was a pep talk.

“All we got to do is go get one [in Oakland]. It’s not as insurmountable challenge to go out there and get one,” Nurse recalled Monday.

That’s when team sphinx Kawhi Leonard piped up and said that, “Expletive that, let’s go get them both.”

(Charmingly, that is the word Nurse used when he quoted Leonard – “expletive.”)

Now that all your Toronto sports nightmares have become corporeal and want to move into your house for the next week, maybe that makes everything better this morning. Or maybe not.

Toronto lost a game on Monday night that they should have won, 106-105. Kyle Lowry had a last-second shot to win it, but missed.

This was an awfully Toronto thing of them to do. A home win is now off the books, unless the Raptors would prefer to string this out to a Game 7. They very, very much do not want to do that.

It’s not panic time yet. I see you over there running around with your hands in the air and hope that’s just your new workout routine. If not, stop that. This was never going to, was never supposed to, and never could be, easy. The Warriors didn’t win three of these things because they are excellent at orderly surrender. Some sort of fightback was inevitable.

The question now is not whether Toronto pooches it, but whether Golden State can keep up this sort of pace for eight more quarters. Because they probably have to win all of them. And when you are facing Leonard, that isn’t easy to do.

The difference in Game 5 – at least, initially – was the return of Kevin Durant.

Durant is famously fragile, famously thin-skinned and famously good. He’d been out a month with a strained calf. Since Durant is free to leave as a free agent in a few weeks time, his long absence had become A Thing.

When Durant arrived on the court for his pre-game routine, the Toronto crowd booed him as if he had punched the mascot in the middle of the game.

When he missed his first practice shot, they cheered. They cheered every miss, louder and louder. Then Durant stopped missing. He hit dozens of shots from every part of the floor. At one point, he was taking them exclusively off a single foot. His good streak continued into the game, where he scored six without seeming to try.

So maybe don’t boo Kevin Durant. It makes him angry.

The Warriors are a different team with Durant in the lineup. His freakish combination of size, mobility and long-range accuracy make him very close to impossible to defend. His presence allows Golden State to play at much higher tempo with greater flow.

At the outset of Monday’s game, the Warriors were five-for-five from three before the first timeout was called.

“If they’re going to be a hundred per cent from three, this is going to be difficult,” one pie-eyed optimist in press row said.

Durant had 11 points and one surly, ongoing encounter with Fred VanVleet in 12 minutes. Midway through the second quarter, he appeared to aggravate his calf injury while trying to make a crossover.

As he exited the court, a trainer tucked under his arm, the crowd chanted his name. It was hard to say whether they were for him recovering (later) or against him returning.

Irrational exuberance was the tone all night long. They’d been lining up to get into the fan zone since Saturday. Someone paid 30 grand for a single ticket.

The Scotiabank crowd was so riled up they even cheered Vince Carter, who was dishonorably discharged 15 years ago.

This is a bit like Washingtonians cheering Benedict Arnold because they ended up winning the revolution. So be warned all future sports turncoats – Toronto never forgets. Eventually, it grows bored of remembering.

With Durant gone, it was time for Steph Curry to return to Steph Curryness, which involves making shots that appear to go through, rather than around, defenders’ outstretched arms.

This loss had a simple explanation – Golden State made shots; Toronto didn’t.

By the third quarter, you were starting to feel a little sorry for all the poor saps who spent three months rent on tickets. Even Drake looked hangdog for the first time in a while.

Everyone had forgotten how this works. Toronto doesn’t just win because that’s a fun story.

It’s been a long time since the Philadelphia series, or at least seems that way. This was the first reminder of how the Raptors team was playing all the way back then, a whole month ago.

Toronto went collectively cold for an evening. The result was a loss.

What the Raptors didn’t do was stop playing defence, or give up late, or run around like a bunch of chickens headed to the chopping block. Though the deficit ballooned at times, it ended up close. This was a defeat, not a surrender.

Those happen. Even when you’d prefer they didn’t.

On Tuesday, the Raptors head back to Oakland.

Now this gets simple. Anybody can win a one-game toss-up. A hot shooter or an insane bucket can win you a series. You remember how that works, I’m sure.

So while winning Game 5 at home with the whole country prepped for a party would have been pretty, now they have to do it ugly.

In Thursday’s Game 6, the Raptors have to go through Golden State. Presumably, Durant is done for the series. He left during the third quarter of last night’s game, in a cast and on crutches.

That leaves one over-arching star to deal with. Toronto has to either limit Curry, hope he flags or put him on his back every time he pops out for one of those long threes. All’s fair and so on.

Toronto should still win this. There is no acceptable excuse if it doesn’t. The Raptors must understand that.

Now, after a practice try at becoming a championship team, they have to play like they do. 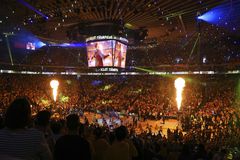 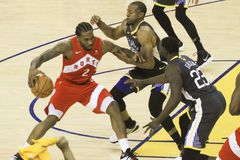