Kyle Lowry and Serge Ibaka have watched from the sidelines as the surging Toronto Raptors have put together a seven-game winning streak and climbed to second in the Eastern Conference.

Nick Nurse earned conference coach of the month for the team’s excellent November.

If the biggest question mark heading into this post-NBA championship season was Toronto’s depth, Nurse and the Raptors bench have emphatically answered.

“Very impressive. I’m going to be honest with you, I didn’t see this coming,” Ibaka told reporters Monday. “They really surprised me and it’s a good thing to have them. Now we know we have a great team with those guys. We know we have a chance to go back and compete at a high level.”

With Ibaka back from an ankle injury and Lowry returning from a broken thumb, the 15-4 Raptors hope to be getting close to full strength as they head into a tough stretch of December games.

The two were injured in the same Nov. 8 game at New Orleans and Toronto went 8-2 in their absence. Ibaka returned for Sunday night’s wild 130-110 win over Utah. Lowry could potentially play Tuesday when Toronto plays host to the Miami Heat (14-5).

The 33-year-old guard practised with the team Monday and summed up his injury as “better.”

“It’s been almost four weeks now,” Lowry said. “We had a target date and things didn’t heal as quickly as we thought they would. Now it’s just a situation of figuring out how much time it needs. It’s a day-to-day type of thing, honestly.”

Lowry has been a vocal leader on the sidelines, and jumping into drills to demonstrate in practice. But he said he’s “tired of that [stuff]. I’m ready to play.”

The Raptors backups have been a revelation in the absence of the two veterans, and Fred VanVleet has stepped in almost seamlessly as the team’s starting guard. It’s been a group effort, Nurse said.

“I think with any departure, like anybody, the usage and all that stuff needs to get spread around. It’s not like we just expect one guy to come in and be that guy … everybody’s chipped in,” Nurse said. “Fred has been great in filling in as the lead guard full-time, but I think Pascal [Siakam] has had a lot of playmaking, Terence [Davis] has, Rondae [Hollis-Jefferson] has, Marc [Gasol] has.

“It’s always a collective effort to try to plug those gaps with a group of guys, rather than just make it a one-for-one job.”

The Raptors were written off by countless people as a serious threat after Kawhi Leonard left for the L.A. Clippers in the off-season. Now boasting one of the league’s best records, does Ibaka feel vindicated?

“It’s kind of funny because, at this point, I’m just laughing,” he said.

The 30-year-old big man looked rusty at times Sunday night, but had the Raptors bench roaring late in the fourth quarter when he launched a firm pass toward VanVleet. Problem was, VanVleet was on the bench, he just hadn’t sat down yet.

Still, Ibaka was happy to be back.

“It’s good. I love basketball and I love playing this game,” he said. I didn’t practise for four weeks and [Sunday] night was the first time with in-game contact and playing five-on-five. The first couple of minutes were really rough. But I wasn’t thinking about it. It was exciting and I was thankful just to be back.”

The Raptors face a tough couple of weeks with Houston visiting on Thursday. James Harden poured in a season-high 60 points in Houston’s 158-111 rout of Atlanta on Saturday. They’re in Philadelphia on Sunday, Chicago on Monday, then return home to play host to Leonard and the Clippers on Dec. 11.

One big plus: 11 of the Raptors’ next 15 games are at Scotiabank Arena, where they’re undefeated this season. 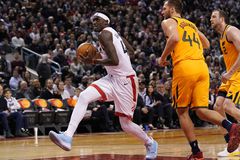 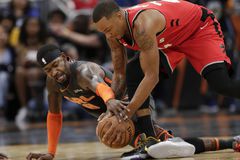 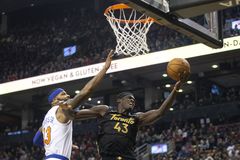