After the smoke dissipated from the firecracker-popping banner unveiling, the Toronto Raptors hit the floor and started to answer the question on everyone’s mind. How will the remaining players move on in Toronto after the profoundly gifted Kawhi Leonard left them in free agency?

In their first game as the reigning NBA champions, Pascal Siakam and Fred VanVleet put the team on their shoulders and showed the world the Raptors will be okay.

The night began with an emotional spike, thanks to an extravagant 20-minute ceremony to celebrate the club’s historic championship. There was an emotional video montage of their playoff run as a single dramatic spotlight silhouetted the Larry O’Brien Trophy. NBA commissioner Adam Silver was on hand to help dole out eye-popping diamond championship rings the size of plums.

“There was a lot of excitement, and being happy thinking of the whole journey we went through to get to this point,” said Siakam. “Then you’ve got to be ready for a game, that’s not easy. It was the first game, we had a lot of things to figure out.”

The celebrations came to a close, the crowd quieted, and the Raps began the ordinary work of beginning another NBA season.

The crowd was decked in black T-shirts featuring a gold dinosaur clenching the championship trophy. All 20,000 fans in the building were also gifted a replica of the team’s glittering championship ring. Otherwise once the ball went up, it felt like a just another early-season night.

Nurse started both of his point guards together – VanVleet mostly handling the ball, and Lowry at shooting guard. OG Anunoby, who missed the entire postseason recovering from an appendectomy, started at small forward. Siakam, fresh off signing a max contract, began the night at power forward. Big man Marc Gasol, who has barely taken a breath since winning a FIBA gold medal with Spain, was the starting centre.

Anunoby hit his first shot of the night – a three. But that was the only Raptors highlight in the opening few minutes, as the Pelicans capitalized on Toronto’s emotional overload and quietly built a 13-4 lead.

The first man off Toronto’s bench was Ibaka halfway through the first quarter, relieving Gasol at the five spot. Norman Powell then subbed in for Lowry at the two.

The Raps soon settled in. They trailed 30-27 by the end of the first quarter to a New Orleans squad missing first overall draft pick Zion Williamson, who just had knee surgery. Still, they had the young stars traded in from the Los Angeles in the deal for Anthony Davis – Lonzo Ball and Brandon Ingram, along with a familiar face to the Raptors from last year’s playoff series with the Philadelphia 76ers, JJ Redick.

Nurse used just eight players on opening night, sprinkling in new guard Terence Davis on top of his trusted seven. He chose not to call on newcomers like Matt Thomas or Stanley Johnson just yet, nor returning youngsters Chris Boucher or Malcolm Miller. The coach said he plans to use Patrick McCaw when he returns from a sore left knee.

The Raps were behind 61-55 at halftime, and eased ahead in the third quarter.

VanVleet, who had been serenaded with “Freddy!” chants several times throughout the night, headed for the locker room late in the third quarter limping after injuring his ankle, followed by members of the Raps’ medical staff.

VanVleet returned later in the fourth and played out the game. Siakam had a prolific final quarter, showing off his variety of finishing moves. VanVleet made some timely plays.

“I almost pulled him out,” said Nurse of VanVleet of the fourth quarter, who he could tell was hampered by the ankle. “Then I ran some plays for him instead. He’s really got some guts.”

The teams remained tied 117-117 at the end of regulation, as a game-tying three-point attempt by Powell bounced off the rim.

The home team outscored the Pelicans 13-5 in the overtime period, and didn’t need to lean on Siakam – who fouled out.

Anunoby scored 11 points in his return, adding seven rebounds. Gasol had a lacklustre six-point night on 2-of-9 shooting. Ingram was the top Pelican with 22 points.

Next up for the Raps is a two-game road trip to Boston and Chicago. 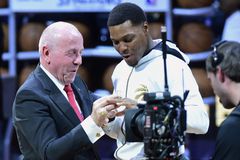