Kyle Lowry didn’t look like a guy who missed most of the pre-season recovering from a summer thumb surgery, as he powered in 26 points to will the Raptors to victory Monday night.

All five starters registered double-digit scoring performances as the Raptors outlasted a familiar foe and escaped with a win in their fourth game of the season.

Lowry led all scorers and dished six assists, while Pascal Siakam added 24 points and nine boards as the Raps registered a 104-95 win over the Orlando Magic, the first team they defeated in their historic championship run last spring.

Toronto’s Fred VanVleet scored 14 points and OG Anunoby added 12 points, eight boards, and five steals. Marc Gasol had a 10-point, 10-rebound showing and his plus-minus of 16 was the best of the game. They survived on a night when Orlando came back from two huge deficits. The victory stretches Toronto’s record to 3-1.

Monday’s game was the first of six ’95 Rewind nights this season, planned to celebrate the club’s 25th anniversary by throwing it back to the 1990s. The Raptors trotted out in bright purple-and-red warmup suits, and the speakers pumped out the sounds of LL Cool J, Maestro Fresh Wes, the Backstreet Boys and the Spice Girls. The Raps played in their original 1995 white pinstriped uniforms featuring the old red cartoon dinosaur.

The team owner, Maple Leaf Sports & Entertainment Inc., rolled out a purple-accented hardwood floor for the night, just like the one the Raps once debuted inside SkyDome, complete with dino footprints.

VanVleet said the jerseys were among his all-time favourites. Lowry called the look of the whole throwback night “sexy.” Siakam loved that the 90s dinosaur theme people once mocked has become so hot.

“It is pretty funny that people really like the throwbacks. When it actually came out, it wasn’t a thing,” said Siakam after the game as he wore another purple and black throwback t-shirt with retro Nike high-tops. “Whenever you throw something back, it’s exciting, a bit. For me, they’re cool.”

Canada’s own Barenaked Ladies sang the national anthems, just like they did at the team’s historic first NBA home game. They invited back Much Music VJ and Electric Circus star Monika Deol on Monday to join the Raptors’ in-game DJ.

Orlando returned an identical starting lineup to the one it used against Toronto in the playoffs, a tall group centred by seven-foot big man Nikola Vucevic and springy 6-11 forward Jonathan Isaac.

Both teams began the night smoking hot from beyond the arc in the opening minutes – the Raps led by Lowry and Anunoby, the Magic by Isaac. The Raps were moving the ball well, and they built a 14-point lead. Siakam dazzled with his finishing moves, Anunoby manufactured steals and took off for breakaways, while Lowry bullied his way to the hoop, refusing to be deterred by Orlando’s big lineup.

Then both teams cooled from beyond the arc, with the Raps especially icy from deep, going 0-10 from 3-point range in the second quarter. Orlando chipped away at Toronto’s hefty lead, and trailed by just five at halftime.

Toronto steadily rebuilt that cushion back to 15 in the second half behind more razzle-dazzle from Anunoby and a comeback half for VanVleet, who had gone 1-8 in the first half.

Magic head coach Steve Clifford was impressed with the way Toronto’s 6-foot-1 point guards play on the floor together.

“Well, it makes perfect sense," he said. "The thing you want to get to is you want to get your best players on the floor. It makes them more interchangeable and that’s the way the NBA is going.

“Both of them are so physical, that even though they give up some size, it’s not like you can post them. … They played fast last year, but so far, in the preseason and in these three games too, they are flying up and down the floor.”

But the Magic fought back in the fourth and eased into the lead, with daggers from Isaac, Evan Fournier, DJ Augustin and ex-Raptor Terrence Ross (for whom the Raps had just played a tribute video).

The Raps stole it back again, thanks to the pick-and-roll, executed successfully a few times by Siakam and Lowry. The all-star point guard willed his way to the free throw line in his 10-point fourth quarter.

“Nothing really surprises me about [Lowry], to be honest with you. He’s just such an experienced guy and such a gamer, man. I like it,” said Raptors coach Nick Nurse. “His shot volume is up and (we) say, keep shooting them. He took 11 threes tonight. Ten is the number we’re going for, so he’s getting there.”

Lowry eschewed suggestions from the media that perhaps he is ahead of where he thought he would be conditioning-wise after missing so much of training camp and pre-season play.

“No. Not even close. I think I could be a lot better,” said Lowry. “I think given another couple weeks of playing and some extra cardio and getting my body right a little bit more, I'll be a little bit better.”

VanVleet snickered at the idea that many expected Lowry to be rusty after he missed the preseason.

“He works all summer. He wasn’t really practicing, but it’s not like he wasn’t working out. That was a little cat and mouse game for him, but he’s never going to come into the season not ready to go,” said VanVleet. “He’s a true professional and one of the best point guards in the league for a reason.”

Isaac led the Magic with 24 points, while Fournier had 18. Ross finished with 11. Vucevic was held to just five points on 1-of-13 shooting, but had 12 rebounds.

Toronto head coach Nick Nurse stretched his rotation to 10 players on Monday. Patrick McCaw (four points in 17 minutes) played his first regular-season game of the season, after sitting the first few with left knee soreness. Chris Boucher (two points in four minutes) got some playing time for a second straight game, in at power forward. With McCaw back, Terence Davis subbed in for just one minute and went scoreless.

Other ’95 Rewind games this season will include contests versus the Milwaukee Bucks, Memphis Grizzlies (who plan to wear original Vancouver Grizzlies jerseys for a classic Canadian matchup), Kawhi Leonard and the Los Angeles Clippers, and two versus Vince Carter and his Atlanta Hawks.

But the next test for the Raptors comes this Wednesday, with a visit from former head coach Dwane Casey and his Detroit Pistons. Then the Raps head to Milwaukee to face the Bucks for the first time since the Eastern Conference Finals. 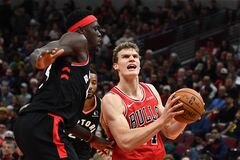 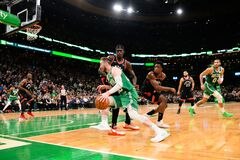 VanVleet steps up and sets the tone as Raptors’ new leader
October 25, 2019 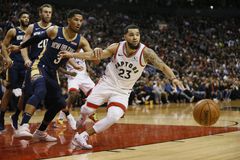