The Golden State Warriors’ investor who shoved Toronto guard Kyle Lowry during Game 3 of the NBA Finals won’t attend any more games in the series, or the next season.

The NBA and the Warriors announced Thursday that Mark Stevens has been banned from attending NBA games and Warriors team activities for one year and has been fined US$500,000 for pushing and directing obscene language toward Lowry. Stevens’ ban is effective immediately and carries through next season, including the playoffs.

The Warriors said in an earlier release that they and Stevens, who is listed in the team’s media guide as a member of its six-person executive board, apologize to Lowry and the Raptors.

Lowry went into a row of seats along the sideline in an effort to save a loose ball during Wednesday night’s game at Oracle Arena. Lowry landed a few seats to Stevens’ left and video shows Lowry then being shoved in the left shoulder.

Another angle of the fan pushing Kyle Lowry @NBATV pic.twitter.com/NG6odI0kCp

“Mr. Stevens’ behaviour last night did not reflect the high standard that we hope to exemplify as an organization,” the Warriors said earlier. “We’re extremely disappointed in his actions and, along with Mr. Stevens, offer our sincere apology to Kyle Lowry and the Toronto Raptors organization for this unfortunate misconduct.”

Lowry said he spoke with NBA officials about the incident before leaving the arena. He told The Associated Press that the man, who was not identified at the time, made a vulgar comment to him repeatedly during the brief exchange.

Warriors spokesman Raymond Ridder and security officials confirmed the fan who shoved Lowry was ejected and escorted from Oracle Arena. Stevens was wearing an NBA-issued credential while he watched the game.

“Hopefully, he never comes back to an NBA game,” Lowry said.

Forbes identifies Stevens as a venture capitalist with a net worth exceeding $2 billion.

“There is no place for such interaction between fans – or anyone – and players at an NBA game,” the Warriors said.

LeBron James of the Los Angeles Lakers reacted earlier to the Warriors’ announcement on Twitter and indicated that he would like to see the team do even more.

“OK cool but still ain’t enough! They did exactly what they had to do,” James wrote.

This was not the first high-profile incident between players and fans this season.

Oklahoma City’s Russell Westbrook was involved in at least two such scenes during the regular season, one of them leading to a fan’s permanent ban from all events at the arena the Utah Jazz call home. Westbrook reacted angrily after he said a fan at a Utah game made racist comments to him, and the league fined Westbrook $25,000 for responding in a vulgar manner.

Westbrook also was touched by a young fan who was seated courtside at another game, and reacted calmly.

And while not a player-fan exchange, New York Knicks owner James Dolan made headlines when a fan at Madison Square Garden told him to “sell the team” in an incident that was captured on video. Dolan told the fan he was rude, asked if he wanted to come to any more games and then told him to “enjoy watching them on TV.”

NBA Commissioner Adam Silver said the league has “redoubled” efforts to make sure that fans understand what conduct is appropriate and what isn’t.

“We have had lots of conversations directly with the players’ association, the players, because absolutely we want them to feel that they’re in a safe environment,” Silver said last week in Toronto when the NBA Finals were beginning. “And we don’t want them to be distracted during the game or think that they have to take matters into their own hand.”

Lowry said fans who sit inches from the sideline or baseline should understand that they may get in on the action. Dwyane Wade famously fell on entertainment icons John Legend and Chrissy Teigen as they sat courtside for his final home game with the Miami Heat two months ago; luckily in that case, all three parties could laugh about it afterward.

“People who sit courtside, they might get in on the action,” Lowry said. “Don’t sit courtside if you don’t want somebody touching you.”

The incident overshadowed a breakout game for Lowry. He scored 15 points in the first half to get the Raptors going and finished 8 of 16 from the floor with five 3-pointers. Lowry also had nine assists and four rebounds. 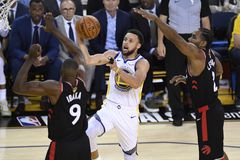 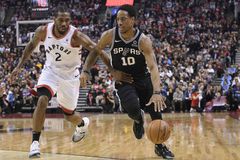 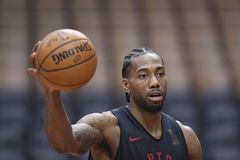