Elena Delle Donne and Kristi Toliver stated their shared goal when they joined the Washington Mystics for the 2017 season: Win the championship that the franchise never had.

In the final minute of doing just that Thursday, after Toliver captured a loose ball and drew a foul in Game 5 of the WNBA Finals against the Connecticut Sun, Delle Donne ambled over and hugged her friend and teammate. With an 89-78 victory, the two had become what they’d set out to be: champions.

“All I said to the team before the game was, ‘Regret nothing,’” said Toliver, the only member of the team to have won a title before.

For a series that seemed less even and more a series of violent swings, Game 5 settled into an equilibrium befitting a pair of championship-level teams with only one trophy to go around. Early tone-setting drives to the basket from each team’s signature player, Jonquel Jones of the Connecticut Sun and the Delle Donne, the league’s most valuable player award winner, served notice that any loss would not come from a limit of opportunity.

Delle Donne, who had been limited offensively throughout the series because of herniated disks in her back, worked to bridge the gap between her healthy and injured selves. With the title on the line Thursday, she attacked the basket as if she had a whole offseason to rest and recover – which, of course, she does.

“I felt pretty decent today and I also knew today was the last game,” said Delle Donne, who finished with 21 points and nine rebounds. “I can rest now. So I felt like I was able to give a little bit more, especially on the defensive end.”

Jones, however, made sure that whatever sins she committed in this deciding game, they would not be sins of omission. Jones had eight shot attempts at the break, matching her total for all of Game 3. The Sun’s reliance on Jones was tested, as she struggled with foul trouble all night, though Connecticut coach Curt Miller kept her in for key stretches.

“It’s a winner-take-all game,” Miller said. “You’ve got to let these guys play through some of their fouls. But with the dedication on their part schematically to throw the ball inside, you know, it’s hard.”

For the Mystics, it was Emma Meesseman who proved the difference. She finished with a team-high 22 points and earned the finals’ most valuable player honors. It reflected her growth in accepting what Washington coach Mike Thibault has long said about her: that she is one of the best players in the world.

“We needed me to make shots,” Meesseman said after the game. “I don’t think I would have done this a year ago, two years ago.”

Other Mystics stepped forward as well. Natasha Cloud, quiet for much of a game for the first time all series, found her rhythm in the final period, with eight points in the early minutes. She finished with 18 points.

And Delle Donne, sensing a championship in reach at last, became the undeniable downhill driver, teaming with Meesseman for repeat big mismatches, leaving Jones able to guard only one at a time, each hitting a jumper in the lane to extend the Mystics’ lead to 80-72 with 2:41 left in the fourth quarter. Jones valiantly tried to counter them both, but Meesseman followed with a drive and foul, bringing the crowd to its feet and Toliver leaping into her arms.

More hugs followed, Delle Donne embracing her teammates, the apex of the WNBA universe at the center of a confetti-strewn floor in Washington.

“I always felt she had grit,” Thibault, who also won his first WNBA championship, said of Delle Donne. “I think she just needed the opportunity to show it.” 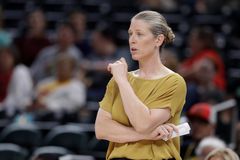 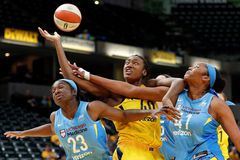