Suffice to say, Nick Nurse has been down this road before.

“In the playoffs, if you lose two in a row, it doesn’t bode very well,” was how the Toronto Raptors head coach summed it up almost 16 months ago, right before the Milwaukee Bucks blew out his team 125-103 to take what seemed a 2-0 series stranglehold in the 2019 Eastern Conference final.

But the series then switched to Toronto, where the stage was set for what was arguably Kawhi Leonard’s greatest performance as a Raptor. A fevered Scotiabank Arena bore witness as Leonard played 52 minutes of relentless basketball, willing the Raptors to a double-overtime Game 3 victory that was as crucial as any in the 2019 championship charge.

Down in the Orlando bubble, there will be no home comforts for this year’s squad and Leonard is otherwise preoccupied with dragging his hometown franchise to a breakthrough title triumph of its own.

His old team is back in familiar territory, however. Stuck in another 0-2 series hole, against Boston this time, the Raptors are also facing the possibility that a loss in Thursday’s Game 3 puts them at odds with history as much as the Celtics – no NBA team has successfully come back from a 0-3 series disadvantage.

For anyone looking to draw hope from last year’s playoff comeback, there are some encouraging portents, including the Las Vegas bookmakers, some of whom have the Raptors as a slight favourite to win Game 3.

As with seemingly everything in 2020, it’s best to expect the unexpected.

As Atlantic Division rivals, the Raptors and Celtics know each other well, even though this is the first time they have met in the playoffs.

Just as the Bucks did a year ago, the Celtics registered a 3-1 record over the Raptors in the regular season – the only team to claim three wins against the defending champions – before winning their first two meetings in the postseason.

However, not once in last year’s series with Milwaukee were the Raptors held under 100 points. Including the final regular-season meeting, played in the bubble, the Celtics have kept Toronto’s offence in check the past three games, keeping it under the century mark each time.

For two teams that rely on three-point shooting as much as the Raptors and Celtics, the difference between the two sets of marksmen has been staggering. While Toronto has the slight edge in three-point attempts (80-77), its success rate has proved costly.

The Raptors are firing at a .263 rate from beyond the arc, while the Celtics are registering a .416 clip. And Boston has the upper hand in field-goal percentage, too, edging the Raptors .447-.385.

But for Toronto, it’s the players the Raptors usually rely on for their sharp-shooting abilities who are missing the mark, with Kyle Lowry going just 1-for-12 and Fred VanVleet hitting 5-of-23.

In last year’s playoff win against Milwaukee, Lowry also endured an off day in Game 2, going 2-for-9, before connecting at a .444 clip in the remaining four games of the series.

The Raptors will need more of the same this time around, starting Thursday.

The presence of the two-time NBA Finals most-valuable player on the Raptors’ championship squad can’t be understated. Now in his first year with the Los Angeles Clippers, for example, Leonard averaged 32.8 points a game in the six games it took to dispose of the Dallas Mavericks in the opening round, including a playoff career-best five successive games with 30 or more points.

No one on this Raptors team is averaging even 20 points a game in the playoffs, with VanVleet leading the way at 19.2, just ahead of Pascal Siakam’s 18.8. And only one Raptor (VanVleet) has had one 30-point game in this year’s postseason, let alone five.

But it wasn’t just the points – Leonard averaged 30.5 PPG in last year’s playoffs – or the standout defensive performances, such as limiting Bucks’ superstar Giannis Antetokounmpo to just 12 points in last year’s Game 3 win. It was his stoic demeanour and leadership that radiated composure, even when the odds were seemingly stacked against his team.

Someone will have to step into that role for this year’s team to help Toronto find its way out of its current predicament.

At 6-0, the Celtics are the only unbeaten team left in the playoffs and seemingly have an air of invincibility about them. But Milwaukee had built up a similar head of steam last year, rolling to 10-1 after the first two games of the conference final.

As history shows, momentum can change in a hurry, but to do so, the Raptors will have to find a way to close out games.

So far Toronto has been outscored 56-42 in the fourth quarter, and particularly in Tuesday’s 102-99 loss, seemed to let Boston off the hook. Of course, shooting 1-of-11 in the final 12 minutes of Game 2 from three-point range, while the Celtics cashed in 21 points from beyond the arc in that timeframe, will cause problems for most teams.

And if the Celtics can tighten up their play, the Raptors could be in trouble. Through the first two games, Boston has been turning the ball over at a rate of 17.9 per cent per 100 possessions, well in excess of the 14.5 per cent it had during the four regular-season games, the lowest rate of any Toronto opponent. 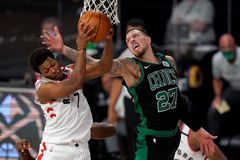 Opinion
Celtics relish playing the villain, leaving the Raptors in need of a hero after ugly Game 2 loss
September 1, 2020 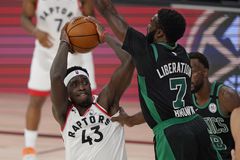 Raptors get a chance to see family after a tough week
August 31, 2020 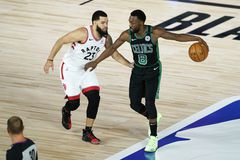