In his seven seasons with the Toronto Raptors, Kyle Lowry has been traded about a hundred times. It never comes off, but Lowry gets dangled more than a yo-yo.

Early on, he was almost moved to the New York Knicks. At the last minute, paranoia took hold and Knicks owner James Dolan decided he was being hoodwinked by Raptors boss Masai Ujiri. Dolan stepped in and nixed what had been a done deal.

Other players would have pouted. It can’t be fun seeing your name being run through the league message board like a second-hand couch on Kijiji.

Lowry’s reaction was to become the most reliably effective player in Toronto basketball history. One major thing changed that turned the Raptors from an NBA gag line into a quasi-powerhouse – Kyle Lowry started trying his hardest.

One suspects he doesn’t get full credit for it because Lowry doesn’t look like a star – not particularly big or chiseled. Lowry doesn’t do anything spectacularly. He just does most things well.

His local reputation may also be hurt by the fact that he is not always a bright ray of sunshine. He clashed terribly with former coach Dwane Casey and has occasionally with Ujiri. Casey used to start off most references to his point guard with a long sigh, as if the Raptors had traded for Dennis the Menace and now it was his problem.

Earlier this season, Lowry took advantage of the fact ESPN was rolling through town to announce to the largest possible audience that he and Ujiri are work friends, but that he is not interested in becoming lunch pals.

“He’s the president of the basketball operations, and that’s it,” Lowry said when asked to describe his relationship with the boss. “He does his job and I do my job. That’s where we stand.”

Well used to this sort of thing, Ujiri used his rhetorical judo to meet Lowry’s charge and flip him over his PR hip: “I know how Kyle is so, honestly, I love him to death.”

That’s the rep. “How Kyle is” is difficult, like a great painter prone to fits of spleen. Occasionally, he locks himself in the studio for a week and refuses to come out.

When he is unhappy to be speaking to you, Lowry will subtly let you know that by staring at you so hard that two burning holes begin to appear in the back of your skull. Other times, he’s great – funny, playful, sharp as a tack. It’s the duality that keeps you interested.

In light of the past few days, maybe it’s time to rethink “how Kyle is.” Compared with his most famous peers, how Kyle is is unusually resilient to the pressures of the job. How Kyle is is a very, very good player of remarkable professionalism.

Lowry’s name was once again in heavy rotation on the rumour mill leading into Thursday’s trade deadline. This is an unusual place to find yourself when you are an all-star on a team tipped to make the finals.

As per his habit, Lowry was sanguine.

“Reassurance would be great, but at the end of the day, they don’t have to call me,” he told ESPN. Then he moved on.

Toronto’s gotten used to this sort of thing and so takes it for granted. It doesn’t work like that in other places.

In Los Angeles, the Lakers boat is mid-roll after it was made clear that team general manager LeBron James would like to trade everyone for Anthony Davis. Some of LeBron’s junior midshipmen took that amiss. They’re now below decks swinging sledgehammers at the hull.

In New York, Kristaps Porzingis had a hissy fit and the Knicks showed him who’s boss by making what will probably turn out to be the worst sports trade since Babe Ruth was run out of Boston. If I had Knicks owner Dolan’s phone number, I would call him to inquire about his interest in certain magic beans that have come into my possession.

Some people think Kevin Durant is headed to New York, which is not a ridiculous thing to think. However bad the Knicks are, it is New York.

Only one person can know for sure. He decided not to talk about it. When he did start talking again, he used his minutes to berate the media for daring to put the words “Kevin Durant” and “New York” on the same page.

“Y’all come in here every day, ask me about free agency, ask my teammates, my coaches. You rile up the fans about it. Let us play basketball. That’s all I’m saying,” Durant said. “Now when I don’t want to talk to y’all, it’s a problem on me. C’mon, man. Grow up. Grow up. Yeah, you, grow up.”

Years ago, a great man treated us to the magnificence of “We’re talking about practice?!” Now that is how you scold the media.

The current generation gets the equivalent of being moaned at by dad on the drive over to piano recital. It is to weep.

All this to say that when an NBA star wants to make things anywhere from difficult to impossible, he can. Every one of them carries around a voice-activated doomsday button that can be set off by uttering certain phrases: “Trade me” or “I hate teammate X” or “We’re going down.”

It’s not so easy to do this in other leagues, where the rosters are larger and lone malcontents can be isolated and negated. If an NBA team loses the co-operation of a star, it’s over.

Lowry could have done that, over and over again.

They traded his best friend. He’s already on what will be the only big contract he’s ever going to get. He’s been doubly eclipsed as the team’s golden boy – first by Kawhi Leonard and now by newcomer Marc Gasol. He’s got a bad back. You might be grouchy, too.

This is where the “He makes a lot of money. Tell him to shut up and do his job” chorus kicks up. But that is easy to say from our perspective. It’s the perspective of people who, were they to go into work tomorrow and say, “I’ve had enough of this” would do so in the absence of microphones and would find themselves in short order standing in the parking lot holding a cardboard box full of framed photos.

Given power, most people will use it. Lowry has chosen to hold his own in check. When they talk about “playing the game the right way,” I can’t think of a better example than biting your tongue when throwing an epic tantrum would be so much fun. Not useful, but fun.

Lowry plays the game – and here we are talking about the game of influence – as right as anyone. He’s no Lebron or Durant, and Toronto should thank him for it.

By Thursday evening, the Raptors had pulled Lowry back onto the boat. He’s in for the duration.

“I had a very good conversation with Kyle. Rumours are rumours … Kyle was aware,” Ujiri said afterward. “I see no issues with him.”

They’d better hope so, though history bears that out. In a league full of loose canons, Lowry has proven himself to be one of the last straight shooters. 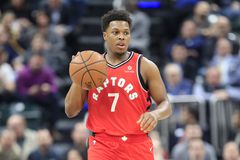 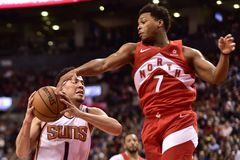