The Toronto Raptors may not have a healthy Serge Ibaka when they face the Boston Celtics in a win-or-go-home Game 6 on Wednesday.

The Raptors centre arrived to his virtual media session with reporters on Tuesday wearing a walking boot on his left foot, saying he twisted the ankle in Monday night’s Game 5 loss. He said he was unsure about his status for Game 6.

“I will see how I wake up [Wednesday], because it’s different. When it happened last night, I felt like I could still play,” Ibaka said. “Then today, this morning, it changed a little bit. So let’s see [game day] when I wake up.”

If Ibaka is limited – or can’t play it all – it’s a serious blow to the Raptors' chances of staving off elimination in their roller-coaster best-of-seven series inside the NBA’s Orlando bubble. The defending NBA champions trail 3-2 after a lopsided 111-89 Monday night loss, in which they looked lethargic and struggled to score – other concerns the Raps must address before tip-off.

Others within the Raptors sounded optimistic that Ibaka will be in the lineup when his team battles to keep its season alive.

“Obviously we need him out there. I haven’t spoken to him about how he’s feeling or anything, but just knowing him personally I would be surprised if he wasn’t out there,” Fred VanVleet said on Tuesday. “Serge is probably the best I’ve ever seen at taking care of his body, recovering, following his routine. So hopefully he can get back feeling good today and be ready for us tomorrow.”

In this Eastern Conference semifinal series, Ibaka has averaged 11.8 points, 6.6 rebounds and 1.4 blocked shots in 23.3 minutes off the bench. Through their nine playoff games, Ibaka has been the Raps' leading rebounder with an average 8.2 for each contest.

Ibaka fell awkwardly under the basket early in Monday’s fourth quarter as the Raps tried to defend Brad Wanamaker driving to the hoop. The 30-year-old centre winced and grabbed at his foot while labouring to get up, but played for a few minutes longer. When head coach Nick Nurse subbed him out, cameras caught him leaving the gym for the training room.

“If he’s there, we’ll play him. I think there’s a good chance of that,” Nurse said of Ibaka. “If he’s not, then we’ll move on to the next guy, and see if we can get him ready to go.”

Nurse did not say for certain how the Raptors would fill Ibaka’s minutes if the big man from Republic of Congo is limited or can’t play at all.

“I think we’ll certainly wait and see there. But just like always, we go to the next guy. Don’t know who that is yet,” Nurse said. “We’ve obviously played Chris Boucher some in this series. Could be Rondae [Hollis-Jefferson], could be somebody else, but we’ll just wait and see on that.”

It once again spotlights the need for more scoring from Raps starting centre Marc Gasol, who has averaged 5.4 points to go with his 4.6 rebounds, 2.2 assists and 0.4 blocked shots in 22.6 minutes in this series. Nurse said the coaching staff has discussed that with Gasol and highlighted for him in film study more chances to score.

“We don’t need a tonne. It’s not like we need 25 from him. But we need him to chip in with some, just because there’s opportunities there for him,” Nurse said. "Yeah, we certainly point 'em out, talk about 'em, show him on the film – just got out of the film session – and continue to encourage him and tell him those are shots he needs to take.”

The Raptors must solve the bizarre lack of energy they showed in two of the five games versus Boston. Unlike in a regular playoff series outside the bubble, they won’t get a spark from the crowd, or a change in city. Now the Raps also face the psychological twister associated with losing out in the bubble: the lure of getting to go home for the first time since mid-June. 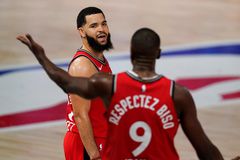 What does Game 5 hold for the Toronto Raptors?
September 6, 2020 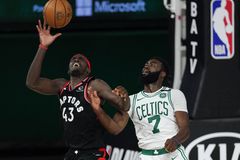 Raptors take back the reins with win over Celtics in 2-2 series tie
September 5, 2020 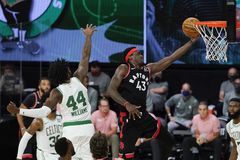