With an NBA title still in sight, the 76ers will need their injured franchise centre – healthy and ready to roll – in the second round.

Seth Curry scored a playoff career-high 30 points and Philadelphia beat Washington 129-112 on Wednesday night to end the series in five games, overcoming Embiid’s absence because of a knee injury.

Tobias Harris added 28 points and teamed with Curry and Ben Simmons to carry the offensive load with Embiid out. Simmons had 19 points, 11 assists and 10 rebounds to keep the top-seeded 76ers in the hunt for their first championship since 1983.

Embiid is day to day with a small lateral meniscus tear in his right knee and he was reduced to Philadelphia’s biggest cheerleader as the Sixers put the misery of last season’s first-round sweep behind them.

Embiid gave a sneak peek that the injury suffered in a Game 4 loss might not keep him out very long. The NBA MVP candidate had the crowd going wild when he hit the court for pregame warm-ups. He shot jumpers around the perimeter, fadeaways, even some free throws – all without any sort of noticeable knee brace under his white leggings –- and put on a show that proved his absence might not last beyond Game 5.

Coach Doc Rivers, in his first season, said he expected Embiid to return in the post-season.

“I don’t know when or how early,” he said. “I’m hopeful. I think that’s a better way of putting it.”

So Embiid and the Sixers wait for the winner of the Atlanta – New York series.

Sixers fans couldn’t wait, chanting “We want Brooklyn!” as the seconds ticked off in Game 5.

Led again by Russell Westbrook and Bradley Beal, the Wizards were hopeful they could the could take advantage of Embiid’s absence and force a return home for Game 6.

With the first capacity crowd this season allowed at Wells Fargo Center – there were 15,523 in the house – the Sixers shook of a slow start and had the place rocking late in the first half when Simmons hit Harris for a 3 and their first lead of the night. Ben Simmons – staunchly defended by Rivers after a slew of missed free throws in Game 4 – hung tight from the line when the Wizards tried to Hack-A-Ben him again.

He also did what he does best, create plays and make his attacks to the rim look silky smooth. He even made 5 of 8 from the free-throw line.

Simmons, who missed 15 of 20 free throws over the first four games, drew Westbrook’s third foul in third. Westbrook complained to the referees all night and had four fouls through three quarters. Beal scored 32 points and Westbrook had 24.

The Sixers needed all the scoring help they could and they found plenty from super-sub Tyrese Maxey. Maxey scored nine points in the first half at a time when the Sixers needed some juice to keep pace with the Wizards. Maxey, a rookie out of Kentucky, hit the rim in traffic with pizzaz and fans erupted with each basket. He’s an instant fan favourite and played the bulk of the starter’s minutes in the first half.

Beal and Westbrook, playing his first game in Philly since a fan dumped popcorn on him in Game 2, could call the season a win after just getting the Wizards to the playoffs after a 17-32 record in early April.

Unselfish and on a mission, the Sixers expect so much more.

Trae Young put the finishing touches on his impressive first playoff series with 36 points and nine assists, and the Atlanta Hawks beat the New York Knicks 103-89 on Wednesday night in Game 5.

Clint Capela backed up his confident words from a day earlier with 14 points and 15 rebounds for the Hawks, who will play the top-seeded Philadelphia 76ers in their first trip to the Eastern Conference semi-finals since 2016. That series begins Sunday.

Young never looked like a playoff rookie, hitting the winning shot with 0.9 seconds left in the opener and scoring at least 20 points in every game. He made a 3-pointer with 43 seconds left for a 15-point lead, then stood at midcourt and bowed to the crowd that jeered him all series.

The profane chants toward the point guard were less frequent than in Games 1 or 2. Young was never rattled by the fans, one of whom was banned after spitting on Young in Game 2. Now he has silenced them for the summer.

Julius Randle had 23 points and 13 rebounds for the Knicks to finish his disappointing first post-season. The winner of the NBA’s Most Improved Player award shot 8 for 21 from the field and finished 28 for 94 (29.8 per cent) in the series.

He led the Knicks to a 41-31 record in their first season under Tom Thibodeau, with a pair of 40-point games during a three-game season sweep of Atlanta. But the Hawks were by far the better team in this series, with only a poor second half of Game 2 keeping them from a sweep.

Donovan Mitchell scored 26 of his 30 points in the first half and Utah advanced to the second round, beating Memphis In Game 5.

Mitchell also had 10 assists and six rebounds in 29 minutes, getting a little rest before facing the winner of the Los Angeles Clippers-Dallas Mavericks matchup.

It’s the third playoff series in NBA history – and first since 1995 – in which the road team won the first five games, according to Elias Sports Bureau.

The Mavs can close out their first series victory since winning the 2011 NBA championship in Game 6 at home Friday in front of a full house.

Hardaway Jr. added 20 points. Doncic’s points were two off his career playoff high. He had a career-high 14 assists and added eight rebounds.

Paul George led the Clippers with 23 points and 10 rebounds after playing the fourth quarter with four fouls. Kawhi Leonard and Reggie Jackson each added 20 points. 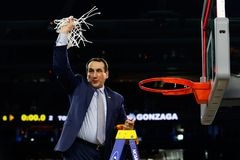 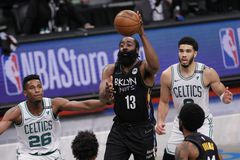 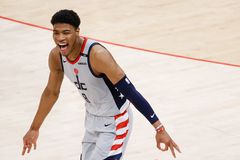