The talent level on the Toronto Raptors is more than adequate, Bryan Colangelo is convinced, with plenty up upside to be seen in the likes of DeMar DeRozan, Jonas Valanciunas, Kyle Lowry and Rudy Gay.

And he believes the right coach in Dwane Casey is in place to continue to guide the young group to what is the next step on the team's evolutionary process: a berth in the NBA playoffs.

Colangelo can only hope that, as the Raptors president and general manager, he is still around to see it through.

On that there are no guarantees.

Colangelo is entering into the team-option phase of his contract with Maple Leaf Sports & Entertainment, the folks who pay the freight for both the Raptors and the Toronto Maple Leafs of the NHL.

So far there has been no indication from the MLSE board if it is planning on welcoming him back.

"There has been a lot of speculation about whether or not I'm coming back," Colangelo said. "I'm anticipating that that will be resolved over the next two to three weeks.

"Basically at some point earlier in the year we came to an agreement with the board that we would put that off until the end of the season when it was more appropriate to deal with. Now we're here at that point and again, in the coming weeks, we'll get to that."

Colangelo was giving his take on the state of the basketball franchise Monday morning at the Air Canada Centre along with Casey, who might have saved his neck after the Raptors managed to play around .500 ball (30-29) after such a dismal start

"We're building," said Casey, who still has one year left on his contract. "So I do know, and I'm confident, that we're on the right path going that way and we have the right pieces, the right talent. "Now we've got to get that talent together and pulling together and the chemistry with that group going in the right direction."

There were rumblings during the course of the season that a rift had developed between the coach and his general manager, that they were not seeing eye-to-eye on how the on-court product was being utilized.

Colangelo said that that other than the normal strains that invariably crop up between the coach and the GM during the course of a long season, there is no problem between the two men.

"We challenge each other, we talk about things on a daily basis, ways to improve the basketball team, ways to better utilize the talent that we have," Colangelo said. "There's give and take and it needs to be that way.

"It's a relationship that needs to play out that way. If we're both saying the same thing all the time it's probably going to be less productive."

That said, Colangelo said he knows Casey will return as the coach as long as he remains in charge.

Colangelo defended his recent record noting that the team has just completed the third year of a plan to reinvent itself after the untimely departure of all-star Chris Bosh to the Miami Heat and there has been steady improvement.

Colangelo said he believes that next step will happen next season.

"I will take that squarely on my shoulders and say that is the new expectation, to make the playoffs," he said.

Blair: Has Colangelo finally run out of time to fix disjointed Raptors?
April 18, 2013 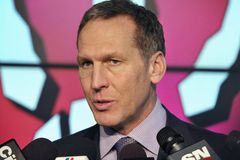 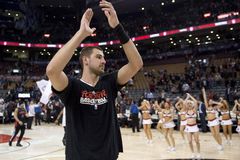