Andrea Bargnani has always been kind of a hard read over the seven years he has toiled for the Toronto Raptors. But his comments in an Italian newspaper that the team is in a "tragic" and "desperate" situation seemed to be clear enough on Friday.

"Nothing has worked from the beginning of the season," Bargnani added in the interview. "We are pretty much the worst team in the NBA."

Such was the unwelcome backdrop to Friday night's game at the Air Canada Centre. The Raptors, mired in a six-game losing streak, entertained the Dallas Mavericks and Vince Carter, Toronto's former franchise linchpin.

And for once, Carter didn't have the last laugh as the Raptors (5-19) played with panache at both ends of the court and were rewarded with a 95-74 victory against a Dallas team (11-12) playing without stalwart Dirk Nowitzki, who has been out all season with a knee injury.

Dallas coach Rick Carlisle said before the game he was concerned having to play against a "desperate" opponent, and his concerns were well founded.

After holding Dallas to just five field goals in the second quarter, the hungrier Raptors latched on to a 54-41 lead at the half, an advantage they stretched to 20 points early in the third quarter on back-to-back three-pointers by DeMar DeRozan and Mickael Pietrus.

And the Raptors were on their way to a laugher, something they haven't experienced in quite some time, relying on a stellar defensive effort that held the Mavericks to under 40 per cent shooting while not allowing a made three-point shot.

"That was one of the best we've had," Casey said. "You're talking about a powerful, well-coached Dallas team, we knew they were coming in here guns blazing."

With two of their top three scorers in Bargnani (elbow) and point guard Kyle Lowry (triceps) both on the shelf with injuries, Casey welcomed both Amir Johnson and Alan Anderson back to the lineup.

Johnson had been out due to a one-game suspension after he flung his mouthguard off the back of a referee Monday in Portland. Anderson was playing for the first time in 17 games after recovering from a partially torn plantar fascia in his left foot.

What Casey wasn't anticipating was having to deal with Bargnani's comments, which appeared in an Italian newspaper and surfaced earlier in the day. Apart from pretty much stating the obvious, the pointed criticisms were not exactly what the troubled franchise needed to hear heading into the Mavericks contest having won just four of their first 23 games.

"That doesn't sound like some of the words, Andrea's English, first of all," Casey said when asked before the game about what Bargnani had reportedly said. "So I'm sure some of it was lost in translation. We're not the worst team in the NBA."

Casey said he had not yet had a chance to talk about the article with Bargnani, who was not hanging around the Raptors' locker room before the game.

Casey said every player on his team has a right to his own opinion.

It was just another brush fire that Casey has had to deal with in a trying season where his own job security is felt to be a concern.

"Casey's a great coach, he's a champion," said Carlisle, who had Casey on his staff two years ago when the Mavericks won the NBA championship. "I'm sure they'll [the Raptors] stay the course."

That remains to be seen, but Friday's game was at least a step in the right direction.

Leading 69-55 heading into the fourth, the hot hand of Linas Kleiza iced it, knocking down three three-pointers that helped provide Toronto with an 80-58 advantage.

Kleiza finished with a game-high 20 points, including four three-pointers in the final frame.

"Linas had one of his night, he has one every blue moon," Casey said.

The trip back to Toronto never gets old for Vince Carter
December 14, 2012 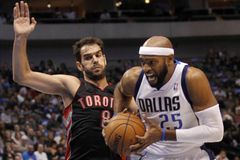 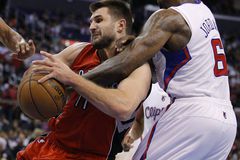 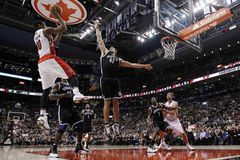 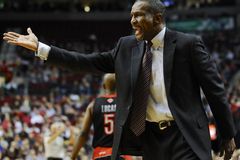