Toronto Raptors Coach Dwane Casey said Jonas Valanciunas could make his highly-awaited return to the court in Monday's Game 4. Instead the seven-foot starting centre remained on the bench as his team tied up their Eastern Conference Finals series 2-2 with a 105-99 win over the Cleveland Cavaliers.

Instead, once again, it was Bismack Biyombo putting on a show.

Before badly spraining his ankle in Game 3 of the Miami series on May 7, Valanciunas was having the strongest post-season of his NBA career. Over ten games in the first two series, the 24-year-old was averaging 15 points and 12 rebounds.

He took morning shoot-around on Monday and was put on the active list for the first time since his injury. After a seven game layoff, the Lithuanian big man skipped onto the court for pre-game warmups on Monday, looking spry. He bounced around during timeouts as if he might come in at any time.

Bismack Biyombo started at centre - as he has since the injury to Valanciunas – and was coming off a franchise-record 26 rebounds in Toronto's Game 4 win.

The Raptors would wait for the ideal matchup on the floor to put Jonas Valanciunas into the game – at least that's what Casey said publicly. Biyombo played the entire first quarter and then the Cavs stayed with a smaller lineup to open the second quarter, so when the Raps rolled out reserves, he called for Patrick Patterson and James Johnson instead of calling on Valanciunas.

Biyombo, had eight rebounds by half-time, but also had three fouls – one a questionable blocking call on LeBron James.

"Right before halftime, right before Biz got his third foul, that's when I thought about [putting Valanciunas in], but it was such a short time, and it was a defensive possession, and he had been sitting there the whole first half," said Casey. "It was close. But I thought just the game was so intense, for him to go in there not loose, and coming back from a turned ankle, it would have been tough for him to get in the flow of the game in crucial situations."

Lowry erupted for 15 of Toronto's 30 points in the quarter – including a trio of three-pointers - giving Toronto a hefty 57-41 lead going into half-time. With Biyombo key in Toronto's efforts to dominate the paint for a second straight game, the Raps led that category 24-16 by half-time.

The big man from the Congo continued to provide moments that once again set the Air Canada Centre ablaze with energy and gave his team momentum. He popped out to defend speedy Cleveland guards out on the perimeter. There was an alley-oop layup and ferocious blocks on Kevin Love and LeBron James – followed by that signature enormous smile by the most popular Raptor of the moment.

Toronto lost its grip on that comfy lead in the second half. The Cavs jumped ahead 90-89 on the backs of dunks from James and sharp-shooting from Channing Frye.

Biyombo had four rebounds in the half, but created rebounds for his teammates as well since the Cavs were committing multiple players to try to box him out. He had key defence in the final seconds – thwarting a shot by Frye, providing a key block and nabbing a ball off the glass with four seconds remaining to draw a foul and go to the free throw line. The crowd chanted 'MVP' while he shot his free throws (both misses).

Biyombo's stat line at the end of the night read five points, 14 boards, an assist, three blocks and a plus-minus of plus-8 over 41 minutes. Toronto won the points-in-the-paint contest for a second straight game, 44-36.

"[Biyombo] creates some offensive rebounding alleys for other people, and that's why we have to gang rebound and not depend on him to get all the rebounds," said Casey. "He's huge for us, just his spirit, his toughness, but also, too, it's going to be great to get JV back now when they double-team and blitz us. JV is a good ball handler, great passer there in the middle of the floor. So we'll invite the double teams there in the middle of the floor with Jonas coming back."

How Toronto manages the centre position on Wednesday will be a major point of interest, as the series swings to Cleveland for Game 5.

"We've been playing great at home," said Biyombo. "So now we've got to trust what we're doing and go into Cleveland and try and get it done."

What didn't seem possible after Game 2 is now feasible for the Raptors
May 23, 2016 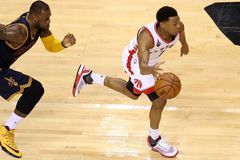