Natalie Achonwa ditched her bulky knee brace for her walk up to the stage at the WNBA draft this week.

"[The brace] killed the picture," Achonwa said, laughing. "I didn't want it with my dress."

The 21-year-old from Guelph, Ont., was selected ninth over all by the Indiana Fever in Monday's draft in Uncasville, Conn. The cumbersome brace not only clashed with her red dress, it was a reminder of the one negative on a night that she'd otherwise been dreaming about.

Achonwa will undergo surgery on Friday to repair a torn anterior cruciate ligament, suffered during Notre Dame's win over Baylor that put the Fighting Irish into the NCAA Final Four.

The 6-foot-3 forward said prior to the injury she'd been a projected sixth or seventh pick.

"Luckily it wasn't too bad of a drop, but at the same time I think it might have had a little effect on the outcome," Achonwa said. "But I really believe that everything happens for a reason. I was just excited to be able to have the opportunity to be invited [to attend the draft]."

Michelle Plouffe of Edmonton, a senior forward from the University of Utah, was selected 19th over all by the Seattle Storm.

"She's really could [have been] a top-two or -three pick in the 2015 draft, so I feel great that we were able to get her," Kraushopf said in an interview on draft night.

"We'll help her get well, get stronger … I also see some great leadership skills in her, on the court as well as off the basketball court. We're talking about somebody who has played international basketball, played for her country in Canada, she's got great communication skills, and we expect her to be ready to go next season."

Achonwa helped Notre Dame to the Final Four in all four of her seasons in South Bend, and guided the Irish to a perfect 29-0 regular-season record heading into March Madness.

She'd never seriously considered playing basketball for a living until around her sophomore year in college.

"I think that's why I was so emotional when I did hear my name called, because it didn't set in until the moment."

Achonwa, accompanied at the draft by her mother Marion, father Manny, and boyfriend Damion Lee, a junior guard at Philadelphia's Drexel University – he tore his ACL back in December – teared up when her name was called.

"I was trying to hold it all in, and make sure I didn't start bawling on stage," Achonwa said with a laugh.

Achonwa, who played for Canada at the 2012 London Summer Olympics, will have her surgery at Notre Dame. She's expected to be out six to nine months before she can start practising, and so will miss the entire 2014 WNBA season, which opens May 16.

"I'm not in a rush, but I am in a rush at the same time," Achonwa said. "I want to take my time, I don't want to have a case where I'm reinjuring it, I want to focus on healing right but at the same time I do have that sense of urgency to get back and make sure I'm getting back in shape for the next season."

Achonwa injured her knee when she drove to the basket with about five minutes left in Notre Dame's Elite Eight win over Baylor. After being helped to her feet, she limped over to her teammates, and the footage of her impassioned speech was all over the Internet.

"As soon as I did it, my teammates were like 'Come on, you're okay, you can get up,' but my trainer came over, and I knew it, I told her 'I just tore my ACL,'" Achonwa said.

"I knew the extent of it, so I just needed to make sure [my teammates] weren't focusing on that. There was nothing they could do to control what happened, so I wanted to make sure they were still focused on the game."

Notre Dame eventually lost to Connecticut in the NCAA final.

With the addition of Achonwa and Plouffe, Canada has three women on WNBA rosters.

Kayla Alexander of Milton, Ont., a former centre at Syracuse, is going into her second season with San Antonio.

It's no coincidence, Achonwa believes, that all three Canadian pros are products of NEDA – the National Elite Development Academy – a program that brought the best young high school players together to train in Hamilton.

The program was shelved because of funding cuts in 2009 after three years. 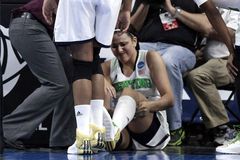 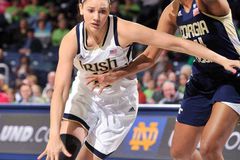 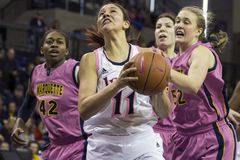