Basketball phenom Andrew Wiggins might be an All-American, but he is Canadian to the core.

The basketball phenom from Vaughan, Ont., scored 19 points to lead his East team Wednesday at the 36th McDonald's All-American game — high school basketball's biggest stage — and talked with pride afterward about the growth of the game north of the border.

"I'm from Canada, a lot of Canadians don't get a chance to come in here and the opportunity to go to this game so I just feel blessed," Wiggins told a packed post-game news conference. "The experience for me was great."

The 18-year-old showed off the speed and scoring range that earned him the James Naismith Trophy as the top high school in the U.S. But the performance from the Grade 12 student at Huntington Prep in W.Va., which included four rebounds and two steals, wasn't enough to lift his East team to victory.

The West roared to a 110-99 win, with Aaron Gordon winning the John R. Wooden award as the game's MVP. The Arizona signee had 24 points and eight rebounds.

The glitzy affair, played in front a crowd of 15,818 at United Center that included Toronto Raptors GM Bryan Colangelo and several dozen NBA scouts, is a good gauge of the growth of the game in Canada. Wiggins, whose older brother Nick will play for Wichita State in this weekend's Final Four, is the seventh Canadian to play in the game in the past three years.

"(The talent level) is coming up I think," Wiggins said. "After the past couple of years, the Canadians have really improved, we're getting our names out there more, especially me, Tristan Thompson (now with the Cleveland Cavaliers), (Gonzaga's) Kevin Pangos, all the Canadians that are in D1 basketball right now and even in the NBA."

The McDonald's game, billed as "Basketball's rite of passage," has a rich tradition that goes back to 1977 and has showcased a who's who of future NBA stars — among them, LeBron James, Kevin Durant and Michael Jordan.

Asked about his favourite moment of the week that included a slam dunk contest that saw Wiggins throw down a spectacular reverse through-the-legs 180, a formal dinner and a visit to Ronald McDonald house, he said: "Mine was coming out (onto the floor) and hearing all the fans cheering, seeing all the smiles on their faces."

One fan, clearly from Kentucky, held a sign that read "Wiggins: You know you bleed blue" in reference to the Canadian's much-anticipated school announcement. Wiggins has visited Kentucky, Florida State, North Carolina and Kansas.

The quiet Canadian, who has garnered more hype than any player probably since Durant and O.J. Mayo were high schoolers, rambled unassumingly onto the court during the glitzy pre-game introductions. His game was much the same — strong but without the flash of the likes of Gordon, who threw down a couple of huge dunks, including a reverse windmill.

"I think I played pretty good," Wiggins said. "It was an all-star game, so I'm just happy to be here."

Dressed in McDonald's red and Adidas' special McDonald's edition "QuickSprint" shoes, the six-foot-seven small forward scored 12 first-half points, opening with a two-handed dunk about two minutes in. He missed a three-pointer several minutes later after sprinting the length of the court for a steal. He ran in for the putback on his miss.

He took it to Duke signee and hometown star Jabari Parker just before the break, darting by the No. 2 prospect to finish with a two-handed dunk.

Recent Canadians to play in the McDonald's game are Thompson and Cory Joseph in 2010, Myck Kabongo, Khem Birch and Kyle Wiltjer (2011), and Anthony Bennett (2012).

Olu Famutimi was selected for the game in 2003 but didn't play due to injury. There was a 17-year gap before that when Canada wasn't represented. Barry Bekkedam (1986) and Bill Wennington (1981) are the only other two Canadians to have played in the game.

North Carolina signee Kennedy Meeks played AAU basketball against Wiggins and said he knows of the Canadian talent coming up.

"Honestly, I think they're taking over really, starting by him being one of the best players to ever come out," Meeks said. "People compare him to LeBron James and stuff like that so I think that's pretty crazy."

Wiggins will be joined by a couple Canadians at two upcoming high-profile showcase events.

He was the top pick for the Jordan Brand Classic on April 13 in Brooklyn, N.Y., a game that brings together the top 22 prospects in the U.S. — Tyler Ennis of Brampton, Ont., among them. The Syracuse-bound Ennis was expected to be named to the McDonald's game as well, and he responded to the snub by scoring 52 points in a high school game the day the rosters were announced.

Wiggins then heads to Portland to play in the Nike Hoop Summit on the World Select Team, coached by Canadian Roy Rana. Trey Lyles of Saskatoon was named to that team, but can't play because of an injury.

Ninety-eight graduates of the McDonald's game have gone on to win NBA championships. 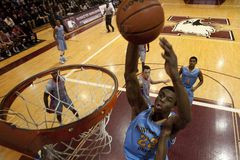 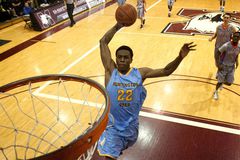 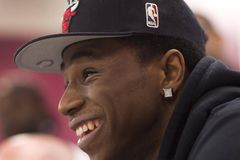