When the final buzzer sounded on Wichita State's upset victory over No. 1 seed Gonzaga last weekend, the Shockers broke out a dance circle on the floor of EnergySolutions Arena. At its centre were Canadians Nick Wiggins and Chadrack Lufile.

It was a celebration of not only the biggest upset of March Madness, but of a strong bond that helped propel the best friends to such lofty hoops heights.

"It was really a dream come true," Lufile said.

No. 9-seed Wichita State advanced to the NCAA basketball tournament's Sweet 16 by running roughshod over eighth-seeded Pittsburgh in its opener, then ousting the Zags — including Canadians Kelly Olynyk and Kevin Pangos — 76-70 on Saturday.

Wiggins and Lufile are two of five Canadians left in March Madness from an original 27 as players from north of the border took the NCAA tournament by storm.

"I'm thrilled for all of them," said Steve Nash, GM of Canada's men's team. "Obviously it's a great marker for how the game has grown in Canada, so many players have had such a big impact on the NCAA tournament, and at some terrific schools as well."

The Shockers now find themselves in position to make a run at the Final Four. It would be another remarkable page in what's already become a Cinderella story for Wiggins and Lufile, Canadians who became best friends and each other's biggest supporters back when they were just trying to find their way to the NCAA.

Wiggins, a Toronto native, is a junior guard for Wichita State and the older brother of the more famous Wiggins — high-school phenom Andrew. Lufile (rhymes with Lucile) is a junior forward from Burlington, Ont.

Both took the long route to Wichita. Lufile played in junior college at Chipola (Florida), Vincennes (Indiana), and Coffeyville (Kansas), and Wiggins at Vincennes and Wabash Valley (Illinois).

It was at Vincennes the two became friends. They vowed to always have each other's backs.

"It wasn't easy, there was a lot of stuff that happened in junior colleges, sometimes I ended up at the wrong place at the wrong time, coaches leaving, coaches bringing players in. . . stuff behind closed doors. And then I ended up at Vincennes where I met Nicholas Wiggins," Lufile said in a phone interview from Wichita.

The two 22-year-olds split up after Vincennes, playing a season at separate junior colleges, but continued to prop each other up through the rough patches.

"We had a lot of doubters, the road definitely wasn't easy, but we never stopped believing in ourselves that we could make it," said Wiggins. "We split up our sophomore years but we kept in close contact with each other just trying to keep each other motivated. Our goals were always to go to the next level."

That next level was Wichita State, who came recruiting both Canadians.

"It was a dream," said Wiggins.

Lufile wiped away tears in the locker-room after the win over Gonzaga.

"I never thought one day I'd be playing in the Sweet 16, not a lot of guys can say that. But we just stayed strong, and the feeling (after that win) was indescribable," Lufile said. "I remember before I started playing basketball in college, watching (Canadians) play in the NCAA, like Devoe Joseph (Minnesota and Oregon), just playing Division 1 basketball was a dream to me.

"And then making it to March Madness in the NCAA, it was wow, we're here. Just getting there was amazing. Then we started winning games, we beat the No. 1 team in the nation. I just thanked God for everything that happened. A lot of people work hard and want to be in my position, and we're here."

The Shockers returned home to a hero's welcome, including a impromptu visit from New York Jets quarterback Tim Tebow. When the Shockers' bus arrived at the Wichita airport, Tebow, whose plane was refuelling there, got on the bus, grabbed a microphone and told the players their surprising run to the Sweet 16 is something they will remember for the rest of their lives.

Wiggins — whose younger brother Andrew is expected to go No. 1 in the 2014 NBA draft — walked into class Monday morning to a standing ovation.

"It's been pretty crazy," said Wiggins.

Lufile's Twitter and Facebook pages have been flooded with messages from well-wishers, including friends he hasn't talked to in years, plus his high coach at Assumption Catholic Secondary School in Burlington.

"Wow, it seems like the whole world — everyone — has seen the games," he said.

The Shockers (28-8) take on No. 13 seed La Salle on Thursday in Los Angeles, and then would get sixth-seeded Arizona or No. 2 seed Ohio State in the Elite Eight.

Interest in the tournament has been sky-high this season with the amount of Canadian content.

"It's been phenomenal to watch, it's been exciting too for Canadian hoops fans, definitely a sign our depth of talent is growing and that the game is growing," Nash said from the Lakers' bus Tuesday en route to the airport. "There are better players, coaches, know-how, and things are moving in a great direction."

The three other Canadians still alive in the tournament are Junior Cadougan of Toronto, a senior forward for Marquette Golden Eagles, Nik Stauskas of Mississauga, Ont., a freshman small forward for the Michigan Wolverines, and Noel Jones, a junior forward at Syracuse who made the Orange as a walk-on. 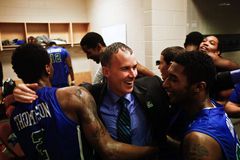 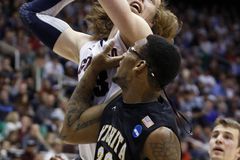