For the longest time, the list just kept getting longer.

His buddies in Brampton, Ont., said he should start one to record the names of all the players he had dunked on. Call it the Schooled-Hard-By-Anthony-Bennett Club, and its membership grew to 100.

Until one day, Bennett figured, why bother? Leaping over defenders and stuffing it in their faces was what he was supposed to do so, he stopped keeping tabs.

They watched him on the basketball court. Coaches, scouts, general managers, they took notes all the way from Bennett's days outside of Toronto to his time at a Nevada prep school and the University of Nevada, Las Vegas until Thursday in New York, when the Cleveland Cavaliers went over their list of NBA possibilities and made Bennett the first Canadian to be drafted No. 1 overall.

It was a surprise to many and a shock to Bennett: Who is this 6-foot-8, 240-pound mix of finesse and rim-wrenching power? Where did he come from?

Anthony Bennett is the new face of Canada's emerging game; a Toronto-born basketball player who was raised by a Jamaican mother who came to a new country and had to work two jobs to support her youngest child. The product of his environment and a nurturing love, Bennett is as likeable as he is imposing, appreciative as he is honest.

When asked at Friday's media conference in Cleveland to describe his personality, he answered happily: "I'm just an all-round good guy. I always look out for people."

Bennett, too, is part of a wave of Canadian basketball talent washing over the U.S., leaving players pooled in Division 1 schools, the NCAA tournament and more and more in the NBA, where Bennett is now teamed with Tristan Thompson, another first-round pick who grew up in Brampton.

Together, Thompson and Bennett could help the Cavs for years on end. For that, Bennett acknowledged: "It's a real blessing to show Canadians have the talent."

He thanked God for that.

Bennett's story – a tale of humble beginnings meets golden opportunity – comes with the added twist that he wasn't much interested in basketball when he first tried it as a preteen. He would shoot hoops with the neighbourhood kids in Toronto's Jane and Finch area until his mom, Edith, moved to the suburbs. There, Bennett underwent changes: "I just started growing. I said, 'Basketball? All right, let's give it a shot.' Look how it turned out."

He enrolled at Brampton's Harold M. Brathwaite Secondary School, where scouts from U.S. universities soon came to scribble down their impressions of this raw but riveting athlete. His coach, Ross Johannsen, can recall the first "wow" moment delivered by his Grade 9 star.

"… The first time he went around a kid on the baseline and did a reverse dunk," Johannsen said with a laugh. "You don't even see that at senior [basketball] often. But there he was in Grade 9, making it look so easy. The skill set he had was tremendous. He could play inside and dunk. He could go outside and shoot the three-point shot. He could dribble the ball and pass it like a point guard. He was pretty unique."

That uniqueness drew Bennett to Findlay Prep in Henderson, Nev. He was coached there by Mike Peck, who had previously worked the Toronto-area pipeline to recruit the likes of Cory Joseph, Thompson and Myck Kabongo. Then, came Bennett.

"We always knew we had a special player," said Peck, now head coach of the Portland Trail Blazers development league squad in Idaho. Bennett worked out hard the summer before his senior year at Findlay making it clear to Peck, "He's going to take off," which Bennett did the following season.

He took off to play at nearby UNLV, where once again people would come to see him and take notes.

"[Bennett] was one of those guys that when you walked out of the gym after you saw him play, you kind of went, 'Wow!'" Grant said. "He just does things that you don't see other people do."

Bennett is not yet the player he will become. He has to get healthy. He has to recover from the shoulder surgery needed to repair a torn labrum, then he has to have enough time to hone his pro skills. As with any draft pick, even No. 1 overall, little is guaranteed.

Still, that he's bounded his way to such a historic distinction speaks well to his potential and to Canada's place on the basketball stage. This year, it is Bennett in the spotlight; next year, Andrew Wiggins of Toronto is already being touted for the role.

"I think the growth and competitive level of the game has improved and that's in large part due to the Toronto Raptors and even the Vancouver Grizzlies," assessed Thompson Rivers University athletic director Ken Olynyk, whose son, Kelly, was drafted in the first round (No. 13) Thursday by the Dallas Mavericks and quickly traded to the Boston Celtics. "You have it in your own backyard, you're close to it. You see so many kids following it and they say, 'Maybe I can be there.' It's more a reality now than a dream."

It is both for Bennett, who was introduced by the Cavaliers with his mom sitting in the front row, beaming.

Others wonder where he's come from and how it happened. He thinks about where he's headed and if he needs to start a new list, one filled with accomplishments, dunks included. 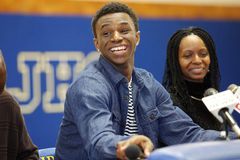 On a night of firsts, Bennett’s selection is one big surprise
June 27, 2013 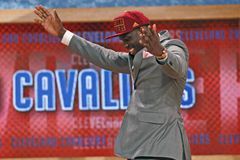 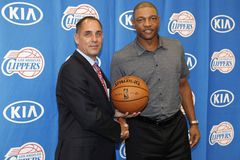