DeMarre Carroll says he had no intention of breathing a word about the sharp pain shooting through his right heel, but it didn't take long for the Toronto Raptors to figure it out.

Carroll returned to Toronto's starting lineup Friday after sitting out the three previous games with Plantar Fasciitis, a condition that causes severe pain in the heel and bottom of the foot. This is the same player who gritted through last year's Eastern Conference Finals for Atlanta on a sprained knee, and still took on the challenge of guarding Cleveland's LeBron James.

The tenacious small forward is the type who needs to be forced off the court when he's injured. He insists he feels better but said his timing felt off Friday as he contributed 11 points on 5-of-14 shooting, making just one of his three-point attempts. He also had five rebounds and a blocked shot in Toronto's 100-81 victory over the New Orleans Pelicans. The Raptors didn't exactly ease him in either – he played 33 minutes. Although it's a condition that has lingered for many other athletes, Carroll hopes it's behind him.

"It was a very, very unique pain, a sharp pain any time I tried to shoot a jumper. Sometimes I could see a ball three feet away from me and I couldn't run and get it without pain, but I didn't say nothing about it," said Carroll. "I think they kind of figured it out when I was in the locker room, I'd be getting dressed and walking around on my tippy toes. The trainers were like, alright, enough is enough."

He was far from satisfied with his return on Friday, blaming himself for the team's sluggish first half when he allowed Eric Gordon to score 20 points.

"He was a little rusty, his timing was off a little bit," said Toronto head coach Dwane Casey. "It takes a little bit to get him going, but he gives us so much defensively, cutting, spacing, handling the ball, tough plays, rebounds, steals, so many other intangibles, that he's hard to replace."

The Raptors signed Carroll to a four-year, $60-million deal in the summer. He had played in six games before being briefly sidelined, averaging 12.3 points, 4.8 rebounds and 35.7 minutes. While bringing obvious positives to Toronto in that six-game spell, he was shooting just 34.2 per cent from the field, compared to the 48.7 he shot last year.

The six year pro plays many key roles for the Raptors, from shooting the three, to grabbing rebounds and often defending the opponent's best offensive player.

He says team medical staff prescribed him total rest, including staying home while the team traveled to play the Philadelphia 76ers on Wednesday. He just kicked his feet up and wore a splint on his foot.

"My wife did a great job, she did everything for me – like taking out the dogs and raking the leaves," said Carroll, owner of an English Bulldog and a Maltipoo. "I owe my wife a nice dinner."

Plantar Fasciitis seems to plague several NBA players every season. Often, it can be controlled with rest, therapy and stretching, but sometimes it becomes a long-term nuisance. The gregarious 29-year-old said he even sought the advice of assistant coach Jerry Stackhouse, who suffered the condition back when he was a player for the Dallas Mavericks. After the game, he said a heel lift and arch support in his shoe and was crossing his fingers for no day-after pain.

"If it was up to me, I would have still been playing through it, but the coaches, training staff, my agent, they basically made the decision for me, told me I needed to think about the long term," said Carroll. "It's one of those things, I'm past it but let's just hope it doesn't come back."

Terrence Ross missed a third straight game for the Raptors with a ligament injury in his left thumb, suffered in practice earlier this week. The teams says it doesn't yet have a timeline for his return.

Friday's game against a Pelicans team minus star Anthony Davis was the first of six straight contests for Toronto versus Western Conference opponents. The Raptors play their next five on the road, starting Sunday. They'll face the Kings, Warriors, Jazz, Lakers and Clippers before returning home to take on the Cavaliers on Nov. 25.

Toronto's two Brazilian youngsters, Bruno Caboclo and Lucas Nogueira, have been optioned to the team's new NBA Development League Franchise, Raptors 905. They will both be in uniform when the squad opens its inaugural season Saturday night in Fort Wayne, Indiana versus the Mad Ants. Raptors 905 play their home opener Thursday at Mississauga's Hershey Centre. The squad acquired Canadian Nick Wiggins on Friday, brother of Andrew Wiggins. 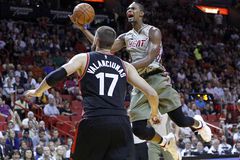 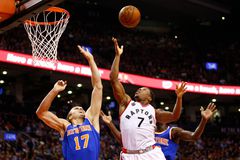 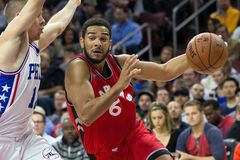