Kyle Lowry is trying to sell me on the idea of hiring a full-time chef.

"A chef is very on top of everything. Everything's organic and fresh. He's unbelievable," Lowry says. "It's an investment in your mind and body."

Lowry's eyes drift down to my gut. I feel very judged.

That sounds expensive, I say.

"Hey, I don't spend a lot of money, but it's worth it," Lowry says, hands flapping in a 'we're all friends here' gesture. "I would really recommend it to anyone who could afford it."

That would not be me.

This is an odd conversation to be having with the Raptors point guard – a man on the cusp of something that's beginning to feel like greatness.

It's odd because it's easy. After his first fractious year in Toronto and a trail of tears elsewhere, Lowry has finally relaxed. He is perilously close to fun.

When the 27-year-old arrived here in a 2012 trade with Houston, he was not fun. He was anti-fun. He had a way of eyeballing you that made you feel like he was reading something off the back of your skull.

When he returned after the first year, he was different. Physically, but that was the least of it.

When I begin a question like so – "Now that you've become the most important athlete in Toronto …" – Lowry pulls back and interrupts.

"Do you really think that's true?" he says. He's really asking. He wants to know.

Yeah, it's true. It's true because Lowry from a year ago would just have nodded along in agreement. More to the point, he wouldn't be wasting his time talking to you in the first place.

A bunch of reasons have been mooted as the catalyst for this shift – a heart-to-heart with GM Masai Ujiri, getting married, having a kid. Lowry lists them all off.

"Sometimes, you have to admit to yourself that maybe you're the one who needs to change," he says.

What makes Lowry so special right now is that he isn't just playing well and winning basketball games. What he's doing is selling a story. This is redemption – and it isn't preceded by some goofball tabloid outrage.

This is a guy who was the 24th pick in the 2006 draft, who was supposed to be a jobbing pro, an uncoachable player, changing his professional DNA by force of will. In Darwinian terms, it's like watching a dog grow wings.

This Kyle Lowry isn't just a star. He is the most indispensable part of the civic sports landscape since Roy Halladay or Mats Sundin.

Unlike those two men, Lowry has it within him to be a transformative figure. In the coming weeks, he can add a line to the 20-year obituary of NBA basketball in Canada: "Then the corpse sat up."

In public, Maple Leafs Sports and Entertainment is taking a Punch and Judy approach to upcoming free-agency negotiations. Ujiri is cagey; CEO Tim Leiweke stands behind him waving a giant, blank prop cheque.

Understand this: Money will not be the factor that keeps Lowry from re-signing. Years will not be the problem. He will get what he wants. If he quits the light in Toronto to step into the shadow of Kobe Bryant or Carmelo Anthony, it will be a judgment on the city. MLSE has gone so far down the road to planning a future with Lowry that, were he to leave, he would be derailing the train.

For a whole bunch of reasons – not least of which is the mental health of anyone who watches the Raptors play – Lowry has to re-sign.

Are you ready to do a deal?

"I honestly haven't even give a thought about what I want to do after the playoffs," Lowry says, in a fair attempt at feigning innocence.

Let's try to play that one out at home.

Mrs. Lowry: 'What are we going to do with the dump-truck load of money you're getting in July?'

Lowry wants the money. He's thought about the money (which will probably land in the $36 million (U.S.) over three years range), but he also wants to feel loved. That's what they all really want – more than team pedigree or the chance to win. It's a universal desire.

"I'm happy," Lowry says, trying to drill down to what this season means. "I'm not satisfied, but I'm happy."

That works for the Raptors as well. They should be happy with this season. Unless it's capped by Lowry choosing to re-up in Canada, there is no satisfaction to be had from it.

Playoff-bound Raptors insist they have no preferable post-season opponent
April 15, 2014 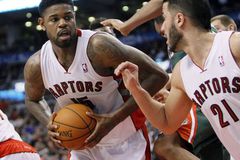 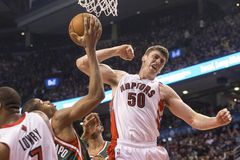