The Toronto Raptors and their global ambassador are having a small diplomatic incident.

On Friday, the club clumsily released images of its new logo, part of a complete redesign slated to debut next season.

The fan base had been primed for a big change. There wasn't any. It looks suspiciously like the Brooklyn Nets set-up – a fact wryly noted by the Nets themselves. Reactions were mixed, verging on disappointed. Rap star and team factotum Drake was in the latter camp.

I posted a Tweet at the time: "The Drake-inspired Raptors redesign. Could've been worse. Also, could've been a whole lot better."

Drake – who has 18.8 million Twitter followers – responded to me the next day: "Actually this redesign was executed without me. My collaboration with [clothier] Mitchell & Ness comes out next season."

Drake doesn't respond to people on Twitter, and certainly not to the wretches in the press. This was a serious break with protocol. It speaks to the level of his annoyance.

According to sources within MLSE, Drake is upset about two things.

First, the "execution." By that, he apparently means the way in which the images were released. They were first shown briefly in a video released on Friday afternoon. That was quickly followed by a colour image posted to the team's Facebook page. That was hastily pulled down, replaced by a black-and-white image. Then, much later in the day, a variety of logos was released, in varying colour schemes.

What happened is not clear. What is clear is that the whole thing was an unintended marketing fumble. The new logo is designed by ad agency Sid Lee, the same people behind the We The North campaign.

If he was bothered by the botched release, Drake is apparently more upset by the colour scheme.

He had pushed hard for the team to make a holistic switch to black-and-gold. Instead, the Raptors are sticking with their current palette: red-black-white-silver. Drake was part of all these discussions. He just didn't get his way.

"He wasn't overruled," said an MLSE source. "Overruled isn't the right word, because it's not like he had the final say."

The Raptors get all sorts of things from Drake's presence – notice, respect, heat, a better shot at wooing high-profile free agents. Upon arriving late last year, he changed overnight the south-of-49 perception of this team. In the franchise's two decades in the league, only Vince Carter has done more to put Toronto on the NBA map.

Drake gets almost nothing in return. As long as I can remember, people laughed at his Raptors' fandom. For a guy who lives and dies by his image, it's been an anchor he wears with inexplicable pride.

So why would you pick a fight with this guy?

Drake was brought into the fold by outgoing MLSE CEO Tim Leiweke. Justin Bieber's manager, Scooter Braun, made the introductions.

Drake had made overtures to the team before Leiweke arrived. Nobody returned his calls. So the deal to get involved in Toronto was done in Los Angeles.

He arrived at the team's low ebb. They were bad, and intent on getting worse. Drake's star power was going to pull them through that fallow period, which the club thought would last at least three years.

They hit on the idea of an image redesign to distract fans in the interim. Leiweke promised Drake major input.

Then, all of a sudden, the team got good.

The We The North campaign hit in the midst of that rejuvenation, and was a massive success. The club continued to get better. They're the best they've ever been. The fan base is energized.

And a thought began to roll through the offices at 50 Bay St.: "Why change a winning game?"

Drake's ideas for a radical redesign found fewer and fewer listeners in MLSE's corporate suites. He hasn't been helped by the fact that Leiweke has been pushed to the sidelines for months, waiting to be let go.

Back when We The North was released, Leiweke was the campaign's front man, personally doing much of the press. As the logo was released last week, he was on vacation at his home in Vail, Colo.

Drake's lost his touchstone in the organization, and now seems to be losing his own footing as well.

If that's the case, what a horrible miscalculation on the part of MLSE.

You brought the guy in because you believed he could provide a vision that could not be bought. He's Toronto's leading citizen. He's proved his brilliance at leveraging the iconography of the city and translating it into global interest. He isn't some wonky brand consultant looking to fleece you – he's willing to do all this work free. He actually loves this team.

There is no point in hiring that sort of person to work on a committee. You hire him to lead.

But as soon as MLSE got a look at Drake driving the bus, they begin wrestling with him for control of the wheel.

It's baffling and entirely predictable. MLSE spent years hiding behind a wall of corporate caution as their teams trolled the performance depths. They began to panic when it all started bottoming out at once.

Now that things have picked up some, they're turtling again.

They're back to their blurred Goldilocks vision of the future – pleasing everyone, and therefore pleasing no one.

Once they figured out how unhappy Drake was with the logo, the team quickly moved to release it in four different colours – including black and gold.

"It's a compromise where everyone's going to get some of what they want," said the MLSE source.

Let's take a look back in MLSE's history. How often has that route worked out the way they'd hoped?

Kelly: It’s hard to mock Drake when he cares so much about the Raptors
December 17, 2014 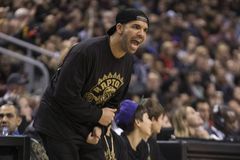 Raptors leave the comforts of home on a high note with sixth straight win
December 21, 2014 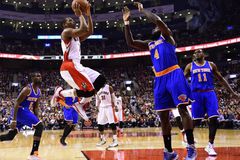 Kelly: The safest thing for the Raptors to do now is nothing
December 12, 2014 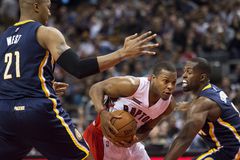 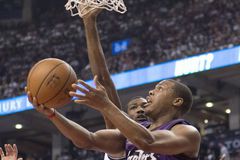 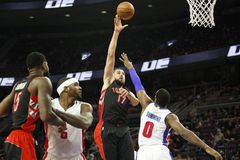