Drake is only 20 minutes late, which is not like him.

He comes in through a public atrium connected to Air Canada Centre. The people lining the halls are shrieking. A woman behind us appears to be in some nervous distress. The guy with her is gulping like a fish.

They shove Drake inside a lightbox – Hotline Bling, y'all – where he should look ridiculous. Instead, he looks resplendent. Which is like him.

Drake could do a news conference while standing in a dumpster and suddenly everyone you know would need their own dumpster. For backyard barbecues and news conferences.

He ducks his head while the people trill, all sheepish. Drake is humble the way Dean Martin was drunk – not really, but, boy, does it ever work.

"This is actually surreal," he says. "I was talking about it today with my mom. I'm going to the game with my mom."

With his mom, y'all.

Two years ago, when the Toronto Raptors announced their partnership with Drake, it seemed like a stunt. Because it was a stunt.

Then Maple Leaf Sports and Entertainment president Tim Leiweke needed someone to take the heat off while they tore the basketball team apart and rebuilt it. Toronto's No. 1 citizen had been trying to get on board with the Raptors for a while. He'd been ignored by all the suits before Leiweke.

Now he was offered a central role as consultant and youth-culture wise man. He was told he could lead a planned rebrand.

But instead of tanking, the Raptors got good. Even they were surprised. As a result, Drake's one-man marketing smokescreen slipped off the radar. By the time he got around to presenting his vision for the new Raptors – the main change being the colour palette – he was ignored.

That happened a year ago. Since then, Drake's been an absentee cheerleader. He doesn't talk about the team as much. He doesn't come to games as much. He's checked out.

On Wednesday, he returned for the third annual Drake Night, acting as though nothing had changed.

The Raptors caught the Cleveland Cavaliers in an early spirit of holiday giving. Riding a strong shooting night from, well, just about everyone, Toronto won 103-99. The home team is now 3-0 on Drake Nights.

As it ended they panned to the man himself. He flashed a sign that a bunch of half-drunk businessman tried to flash back with limited success. It was a complete performance. Drake's too good a salesman to seem out of sorts.

In the past, he's done a pregame address in an airless bunker underneath the arena. This time, he wanted to do it out among the people, creating a major logistical headache. It's not hard to guess why – "Let's remind everyone who the real star is."

It worked. No Raptor could have drawn these cheers.

His address could be interpreted as both a valedictory address and a subtle threat.

There was the usual swooning over Toronto – "the greatest city in the world."

I'm assuming he loves the city so much in part because he never has to ride the subway, but it'd be churlish to doubt him. Drake has better bonafides on the hometown-obsession front than James Joyce.

There was the obligatory "No, no, not me. You're so beautiful" bit.

"We're just trying to create moments for the city," Drake said. "Yes, it is named after me, but it's definitely for Toronto. Anything to do with Toronto, you know I'm on board and I'm excited."

Parenthetical: Seriously, man. I'm begging you to talk to someone about the subway situation. Use your superpowers for good.

Toward the end, he was asked if he expected to continue his unusual marketing relationship with the team.

"I hope it lasts … forever," he said. For a man who always sounds compulsively sincere about everything, this didn't sound anywhere close. There's no way that wasn't on purpose.

"I'll never stop supporting [the team]," Drake said. "As long as we have wonderful guys like [general manager] Masai [Ujiri] here, I'm sure the partnership will grow and blossom."

There are two ideas in there – first, that he'll always be a fan. And second, that if Ujiri – his last connection to the regime that brought him in – leaves, he's out.

Whatever love there may have been between the people who own the Raptors and Drake, it's bled off. They screwed that up when they asked for his help and then un-asked for it.

At this point, it's a business relationship in which no money is exchanged.

The Raptors get the reflected shine of the biggest musical star on the planet. He gets to be the public face of February's all-star game, which will be held in Toronto.

When Ujiri was hired in 2013, he was given a target – be good midway through the 2015-16 season. The plan was to give Drake his big moment at hip-hop's annual Mardi Gras. Then he would step back and the team would take his place in the spotlight.

It didn't work out that way, but Drake still wants his all-star stage. Who can blame him?

Once it's over with, expect this "partnership" to begin flagging. Drake'll keep his courtside seats. He'll come to the occasional game. Let's face it. He's a bigger deal in the NBA than Toronto's NBA team.

(That was another thing he reminded us of: "LeBron's like my brother. He's one of my closest friends in the game.")

Drake won't go, but this iteration of him – freebie brand boost; unwelcome adviser – will.

He was out on the court long before the game began, alongside mom. He hugged LeBron, high-fived randos and did custom player introductions. If you spend a little time watching him, it looks as though being Drake is exhausting. But Drake seems to enjoy it. That's his magic.

When the shots went Toronto's way, he got up and cheered. When the calls went the other, he stood in disgust.

He plainly loves this team the same way he loves the city – innocently, and without expectations.

What he didn't figure on was that, just like any other bloodless corporate concern, the team couldn't love him back.

Kelly: The Raptors should shoot for low-grade invisibility this season
November 24, 2015 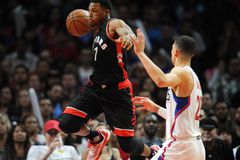 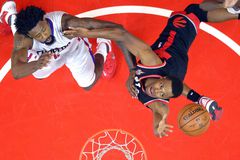