The best measure of how desperate the Toronto Raptors are right now is the sudden volume increase on manly-man rhetoric.

"My wrist is great," DeMarre Carroll said about his un-great wrist. "It's all about how I tolerate my pain. I'm not 'Junkyard Dog' for nothing."

Carroll hinted heavily that he would play Friday despite bending his arm backward during a tumble in Wednesday's Game 5. In the moment, Carroll lay perfectly still, the way people do when they know they've done something truly awful to themselves. The wrist went numb. Carroll said he thought he'd broken it. A subsequent X-ray and MRI revealed no fracture.

During Thursday's practice, Carroll was in civvies (his go-to – a gloriously hideous, body-contoured, onesie-style tracksuit) and wearing a brace. Carroll was taking more than a little pleasure in the idea of how much he was about to suffer.

"[Team bone whisperer and assistant coach Alex McKechnie] said, 'Let's take it day-by-day'," Carroll drawled. "Me being who I am, I'm pretty sure I'm gonna fight him."

Both the Raptors and the Heat are in the midst of trying to whip themselves into a berserker frenzy. Neither team is playing well. Both are hobbled and growing more so with each passing game. As such, neither stands a realistic chance against the healthy, rested and simply-much-better Cleveland Cavaliers. They may as well blow their bolt right now.

(The Heat haven't yet said if their banged-up small forward Luol Deng will play again. It should be noted that Deng once tried to gut his way through the complications of a spinal tap that had nearly killed him.)

"Whatever it takes," Heat coach Eric Spoelstra said manically after Game 5. "We have enough."

By "enough," he meant people. There was a mad, bad, Bomber Harris vibe to him as he said it. This may be the most remarkable thing about the Raptors-Heat series – its cheerful nihilism. Sports people often say, "There's no tomorrow." This may be the rare instance in which they mean it.

Any sport in which you are penalized for gently tapping someone on the arm as they pass you by is not, by its nature, ferocious. Since it has to compete with football for the biggest, freakiest American athletes, basketball increasingly needs to be seen as hard as well as supple and skilled.

When you aren't especially hard, how do you seem so? You find someone you judge less hard and point at them.

Raptors coach Dwane Casey, on his minimum expectation of his players: "If you come out in any other frame of mind other than playing hard, loose balls, 50-50 balls, you're in the wrong profession. You need to go play volleyball or golf."

Well, this is hurtful. I once carried my own bag and for three hours while pretty drunk because the kid in the beer cart was really on his game that day. If that's not heroic, then I've been reading the Bible wrong.

Since Casey's team is beginning to resemble the house-league outfit at a VA hospital, you understand what he's trying to get at. Basketball players are not encouraged to play through injury. They're too long, too fragile and too valuable. Little things, especially as they involve levers and joints, become serious things very quickly.

We're well beyond that point now. The difference between a moderately successful Raptors season and an historic one is the next three days.

That narrative isn't a media creation. The players have been enthusiastically selling it. Lowry's into-the-wee-hours public shooting practice was the ne plus ultra.

The Raptors aren't just a team discovering new territory – they look like one, too.

All the doubt inside the camp has been on full display. No one has seemed calm and purposeful. Not consistently. This has been a clawing, scrambling effort.

Despite the record number of regular-season wins, they haven't earned the right to win in an aesthetically pleasing way. Slow-motion uppercuts are for the Golden States of the world. The Raptors are eye gougers and rabbit punchers. They have to win any way they can.

Casey sees it. He also sees that all sins will be washed away by a victory on Friday.

No one will remember how ugly this was if they win. And no one will care how badly they're beaten in the next round.

We've moved beyond tactics and adjustments. We're into hard-man basketball – physically and mentally. Get a body on someone. Make your shots. Then trust to luck. No one's going to coach their way out of this series. At best, you survive it.

That rounds us back to Dwane Casey. During his time here, no local team manager has absorbed more criticism while being so relatively successful. He's the best the Raptors have ever had, but you wouldn't know it by following the Chicken Littles on social media. Casey gets no credit for winning, and all the blame for losing. That he hasn't cracked publicly is a testament to his character.

On Thursday, Casey was asked what he might do to motivate his players.

If ever there was a moment where a coach might throw his hands up and say, 'What the hell do you expect me to do? Put on a uniform?' this was it.

That's the message now – you don't have to be good. You just have to want it. Now go get it. 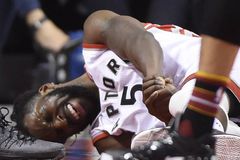 Valancuinas fill-in Biyombo means business for the Raptors
May 12, 2016 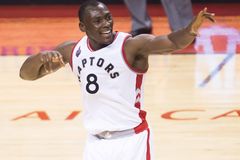