Four months ago, the Toronto Raptors were comfortably engaged in future mode.

Team executives knew they'd be good. They felt sure they'd win the Atlantic, and thought they had a decent shot at taking a playoff round. But that was the reasonable limit of their aspiration.

In terms of 'windows,' they believed their championship slot would open in 2016, with the hoped-for arrival of free-agent Kevin Durant. The team's emo mascot, Drake, was out there flirting madly on that front.

In the NBA, tampering is a pervasive, private affair. But Drake is incapable of non-public acts. The league threatened the team. The team shrugged. For the first time ever, it all seemed so fun and simple.

Things are getting complicated now.

The 17-6 Raptors are moving beyond their 'Wait, we're really good' moment into the, 'How good are we, really?' stage.

If the answer is, 'A whole lot better than we expected,' what do they do about that?

That evaluative process is not being helped by the likes of Indiana. The Pacers arrived in Toronto Friday night for a game they mistook for a very confusing practice. Without injured star Paul George, Indiana is a bunch of guys who play NBA basketball, but haven't figured out how to play it together.

The Raptors continued to ride their new redoubtables – the surprisingly effective Jonas Valanciunas and the deadeye shooting of Lou Williams.

Valanciunas has been sporadically excellent this season, but the team's braintrust still doesn't believe he's the sort of centre you can ride through a playoff series. A team like Chicago would design all their tactics to go through a Valanciunas-sized hole in the Raptors mid-section.

Williams is in the midst of an unending series of heat checks. In the second quarter, he mishandled a long pass, corralled it, wandered aimlessly into the corner with a man draped all over him and tried a stupid three – just because. Of course, he made it. Williams could be the first guy to win the NBA's Sixth Man Award for playing an entire season of HORSE.

Despite the fact that no starter scored more than 10 points, Toronto bulldozed Indiana 106-94.

The Raptors arrived with real questions about their rear guard. They've been fading toward the bottom of the league in terms of defensive efficiency and rebounding. They held Indiana to 41-per-cent shooting and out-rebounded them 52-38. Is that a significant improvement? Or, put another way, should it be regarded as such, considering the team they managed it against?

It'll go on like this for a while. The Raptors' next five games are against teams with a cumulative record of 24-66.

It's a nice ego boost, but it tends to obscure an honest appraisal of their quality. DeMar DeRozan's absence with a groin tear makes that job even harder.

You know Kyle Lowry is going to be an animal in the playoffs. Beyond that, you're not sure of much.

Players like Valanciunas and Williams are tending to make this team special right now. They're also confusing the hell out of everything.

Because if you believe that what they're doing is sustainable, than this team is shifting philosophically from a next-year-or-beyond mindset into a we-can-win-right-now frame.

Waiting for 2016 already seems like a poverty of ambition. The odds of getting Durant fade daily (he's either going to stay in Oklahoma, or end up in Washington – mark it down.)

The Spaniard is a free agent this summer. The greatest lack on the Raptors roster is a truly dominant big man. Gasol is a Jungian figure that features prominently in GM Masai Ujiri's bedside dream diary.

Gasol, 29, has good fiduciary and competitive reasons to stay where he is, but it's still the Western Conference. He might be great for five or six more years and never make it past the second round of the playoffs. Maybe Gasol can be convinced that he should take a free-agent discount in order to ride roughshod over the Eastern Conference for the foreseeable future.

However that pursuit shakes out, you still need to tighten the focus.

So do you go out and overpay for a large, human rental to toughen up that core? Indiana's David West is that sort of player. So are Sacramento's Reggie Evans or Denver's Timofey Mozgov. There are a bunch of these sorts of guys in the NBA – second-tier veterans who can add spine to a team that already has finesse.

But those sorts of players are going to cost you – either in expiring contracts that you'd hoped to hold on to in order to provide cap flexibility, or young talent.

There's also the chemistry consideration. You don't often find players like Tyler Hansbrough, ones who are happy plugging away on measly minutes during a contract year. Do you want to replace Hansbrough with someone who might not adjust so neatly to a bit part on a very tight team? Sometimes, an isolated improvement can lead to an aggregate decline.

The safe thing to do is nothing. It's actually a pretty good rule for life as well as basketball. The team's winning and the fanbase is euphoric. Why take chances?

But Ujiri has already proved that he's willing to take calculated risks from a position of strength. While it's hard to precisely gauge his position, his leverage is practically unlimited.

LeBron too much as streaking Cavaliers rally to edge Raptors
December 9, 2014 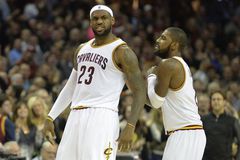 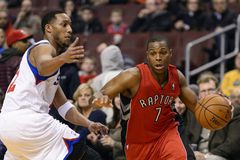