Though there are no moral victories in the postseason, this was as close as you can get.

The Toronto Raptors lost again to the Cleveland Cavaliers on Thursday night. But after an absolute whipping on Tuesday, this one at least felt like a contest.

The closest the Raptors could get in the second half was a 13-point disadvantage. Cleveland looked them in the eye and eased away.

Now trailing in the series 2-0, Toronto will try to pull itself back into it at the Air Canada Centre on Saturday.

Throughout these playoffs, every other Raptors loss has been a 'What if?' sort of game. They were due for one.

What if Toronto found some middle ground between letting the Cavaliers walk unimpeded to the basket and hacking them every time they tried? The difference on Thursday was free throws. Cleveland took twice as many.

What if injured centre Jonas Valanciunas was playing? His ability to dominate underneath the rim and slow the game would fundamentally alter the tempo of this series.

What if Kyle Lowry wasn't off on another of his long dark teatimes of the shooting soul? In the first three quarters, Lowry had twice as many fouls (4) as field goals (2). Yes, he continues to do other things, but Toronto badly needs him to do the main thing.

What if the Raptors could provide 48 minutes of consistent effort? Once again, a small nap in the first half was the difference.

And what if LeBron James, who had a triple-double, decided to take a lieu day? That's the big problem.

Ahead of the game, the Raptors were coping with pressure in their different ways. Some had solutions. Some had perspective. And some had zoology.

"I don't think we can play that up-tempo style with them," Kyle Lowry said. "But I think we can at the same time."

It would turn out that he was wrong, but okay.

"Other than being spanked by 30, we've been there before," coach Dwane Casey said. "Nobody's dejected."

"Nobody's getting ready to jump off a building or anything like that," Casey said.

To his credit, Lue actually laughed out loud at the suggestion: "I've never really experienced a wake-up call with a loss."

His biggest star amplified that sentiment.

"I don't get when people say you need to lose a game to go through something," James said. "I think we went through some things."

If you want an easy way to differentiate where the Raptors and Cavaliers are at the organizational level, this might be it. The Raptors see every loss as a losing opportunity. The Cavs see five bad minutes in the middle of a win in the same way.

The first game had exposed too many weaknesses to correct fully. Casey chose to address one before the tip, shifting forgotten big man Luis Scola back into the starting lineup. The point here was to allow erstwhile starter Patrick Patterson to fall back and bolster the sagging second unit. It was during their minutes late in the first quarter and early in the second that Cleveland had run away with it on Tuesday.

It wasn't working to begin with. Again, this was all about James's presence. Even when he isn't touching the ball, he's controlling the flow of play as opponents are pulled in to and out of his gravity.

One of his first touches of the night was to step in front of a DeMar DeRozan pass, run the length of the floor and bulldoze Lowry under the basket.

The ultimate result of this dominance is inevitably frustration – though it's not safe to direct it in James's direction. Instead, Biyombo exchanged early words with elfin Cavs guard Kyrie Irving.

Irving gave the Congolese a little shove after a whistle. Biyombo bumped back. A huddle formed. Fingers were pointed. People wandered off the benches trying to look tough. Technicals were issued.

The frothing crowd veered directly from rage to joy when in the midst of the confusion they went to a canned tribute to the local TV weatherman. Honestly, it may have been the emotional high point of the evening. The Raptors haven't given this crowd much reason to feel anything.

While Cleveland celebrated meteorology, that little bit of mayhem put some electricity through Toronto. DeRozan led a mini-tear that gave the Raptors their first lead in more than four quarters of play. For the first time, the energy in the building began to sag.

The Raptors had accomplished the first of their goals – to make the Cavs work for it.

The second was to avoid a meltdown to start the second quarter. Led by the dead-eye shooting of Terrence Ross, they managed that as well.

James was getting his points, but whenever he went through the middle, there was a Raptor waiting to give him a poke for his trouble.

Toronto was right there until the final minutes of the half. Lowry was doing nothing offensively, but as soon as he went to the bench, the Raptors lost all cohesion.

Cheap fouls away from the ball sent Cavs shooters to the line again and again. Unable to run them over, Cleveland was bleeding Toronto. A one-point game became a 14-point deficit in five minutes.

Though they'd played them even during most of the half, the Raptors entered the break down 62-48.

It was a reminder of another one of the things the Cavs don't do as a group – take a few minutes off every now and then. The Raptors can't afford any more. 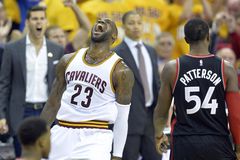 Kelly: Average isn’t close to good enough if the Raptors want to beat the Cavs
May 17, 2016 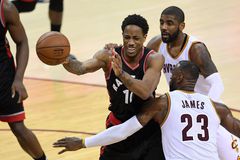 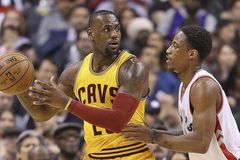