When the NCAA basketball tournament kicks off Thursday, a Canadian-born freshman will be among the standouts trying to make the Kentucky Wildcats the first perfect team since 1976.

The story of Trey Lyles is very different from many other Canadians currently barnstorming the NCAA and the NBA. Most grew up in Toronto, made their mark in one of the city's prominent club programs, then off to a U.S. prep school. Lyles, though, was born in Saskatoon to a Canadian mother and American father, where he lived until 7. From there, his journey went through Indiana, stints with Canada's national team, and now on to Lexington. The versatile 6-foot-10, 255-pound power forward has made himself invaluable on the talent-filled roster at the University of Kentucky, a squad that has gone an astonishing 34-0 and is a heavy favourite to win the national championship.

Lyles's father, Thomas, an Indianapolis native, came to Canada to play for the Saskatoon Storm, a pro basketball team that competed in the World League in the early 1990s. There he met his wife, Jasenka, a Saskatoon native. Trey was born in 1995, and eventually dabbled in hockey, like many boys in Saskatchewan, playing a little basketball on the side at the park with his Dad.

His father, by then a musician, moved the family back to Indiana in 2002, where every kid on the playground was dribbling a basketball. Father and son began playing there day and night.

"In Indiana, you have to know how to play basketball – it's like being in Canada and knowing how to skate," said Lyles, reached by phone in Indianapolis. "We would go over to the park at all different hours. At night, I would bring my car and turn my headlights on the court so we could keep working."

The boy became a student of the game, watching video and asking countless questions of his dad. The two began waking at 5 a.m. daily to work on his game before school.

"Some days I thought, I'd like to sleep in today, and he'd come in at 5 a.m. and be whispering 'Dad, are we going to the gym?' and I was so tired, but I never said no," said the father. "His workouts were viscous, but he stuck with it. The reason I was so tough with him was that I wanted him to understand what it meant to have a great work ethic. He really got it."

By the time he reached Arsenal Tech High School, Lyles was an obvious standout, but his school was far from a state power at first. But he was a game-changer. Despite his dominant size, Lyles could stretch the defence with his jump shot, either fading away or off the dribble. He was a relentless blocker and rebounder, and worked endlessly on the kind of foot speed that would make him a unique threat – a big man that could defend on the perimeter.

He asked his coach after his junior season to create a schedule the next year against the toughest competition possible. The coach obliged.

As a senior at Arsenal Tech, Lyles averaged 23.7 points, 12.9 rebounds and 2.4 blocks and lead his team to a Class 4A state title. He was selected as Indiana's Mr. Basketball, and ranked as the nation's sixth overall recruit in the class of 2014.

"This wasn't a winning program when he arrived, and he could have easily left for any prep school in America, but he stayed here and saw it through," said Jason Delaney by phone, who joined Arsenal Tech as coach in Lyle's second year. "It was like that with playing for Team Canada too. Trey wanted to be part of the foundation in Canada; he wanted to help build things there."

After training for several years in USA Basketball's developmental system, Lyles went to play for Canada's junior team in 2012, helping it to bronze at the U-18 Americas championships in Brazil alongside Canadians who would go on to the NBA, such as Andrew Wiggins and Tyler Ennis. Then in the summer of 2013, he helped lead Canada to its best-ever sixth place finish at the FIBA under-19 world championship in the Czech Republic. Lyles was the tournament's second-highest scorer, behind Ennis.

As a high school underclassman, Lyles committed to playing for Indiana, but changed his mind and later committed to Kentucky instead. He was heavily criticized within his own state but embraced by Kentucky faithful, known as the Big Blue Nation. His dad even wrote a rap song about it called BBN. He helped comprise one of the top recruiting classes in the country.

Over his freshman season, Lyles has shown his versatility, often plugging in at small forward on the tallest roster in college basketball, providing toughness to a squad that had just lost phenom Julius Randle to the NBA. His overall skill has many speculating he'll enter this year's NBA Draft.

Kentucky coach John Calipari called Lyles the team's "X-Factor" mid-season, when the 19-year-old began to prove himself a major matchup problem for opponents.

"He's the one that makes us go from pretty good, to really good to, 'Uh-oh, what am I watching?,'" said the UK coach.

After winning the SEC title on Sunday and officially earning Kentucky's No. 1 seed in the NCAA Tournament's Midwest bracket, Lyles reflected on the opportunity to chase one of his big dreams this week – a title – and the journey he and his father took to get here.

"This has always been a dream of mine," Lyles told the media after the SEC final in Nashville. "I always wanted him to push me like that, but at the time I might not have liked it – I was a young kid and hard-headed and stuff like that, but now I see it all paying off."

Kentucky is vying to become the eighth team to win an NCAA title with an undefeated record. Indiana last did it in 1976. They open play Thursday against No.16 Hampton in Louisville.

Barack-etology: Obama has Kentucky over Villanova in the title game
March 18, 2015 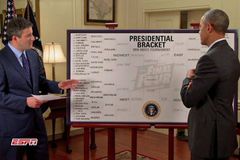 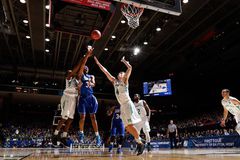 An ode to John Wooden, the wizard who conjured greatness at UCLA
March 18, 2015 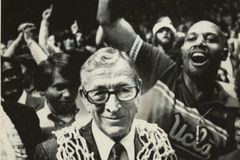