Kyle Lowry and DeMar DeRozan are entering their fifth season together with the Toronto Raptors. The two stars made up one of the NBA's top-scoring backcourts last season, were both all-stars and led the franchise to its best-ever 56-win regular season along with a trip to the Eastern Conference final. DeRozan inked a five-year contract extension worth a reported $139-million (U.S.) in the summer; Lowry could follow suit by opting out of the final year of his contract after this season to become a free agent. The Globe and Mail interviewed both players individually in the preseason to get each man's perspective on their friendship.

On how he reacted to DeRozan's new deal:

I said, "Congratulations," when he signed, "good on you." He texted me and let me know. We stay in constant communication. People don't understand that our friendship is bigger than basketball. If he had signed somewhere else, I still would have said the same thing. This isn't a façade of two teammates who look friendly – this truly is a real friendship.

On the origins of their friendship:

We can't pinpoint when we became tight. That's how you know it's real. It was no one thing. Just being around each other, hanging out, going through the wars together.

On their late-night conversations:

We are on FaceTime together a lot late at night. If I have something to say, I hit him up right away. On the road, I hang out in his room; he hangs out in my room. We have genuine conversations about life. Yes, we sometimes talk about basketball, but we are grown men and mostly we talk about our families, our kids, everyday life. He's in my Favourites list, so when he calls me, it rings through no matter what.

On the friendship between DeRozan's daughter Diar and Lowry's son Karter:

You see our two kids in pictures at the games hanging out – that's real. Diar and Karter are best friends. Lots of times, I have to FaceTime DeMar just because the two kids want to talk to each other. It's one family really – me, my wife, my kids, him, his girl, his kids. My son calls him 'Mar. They come to my house and the kids play cards and DeMar plays with them. The kids totally destroy the house. It's fun. I have two boys; he has two girls – we're different. DeMar has no boys, so in a way, that's his boy. I see Diar, and I'm all nice around that little girl; I have laughs with her, I joke with her. She just calls me "Karter's Daddy."

How he describes DeRozan:

I'd call DeMar a best friend. A genuine, awesome, great guy. It's beyond friendship, if there's a word for that. Family, that's the only other word for DeMar.

He's a very intelligent player and he always gets it done. He figures it out. Everyone says he only shoots two-pointers, but hey, he gets it done somehow. It's not about being a three-point shooter – it's about getting it done.

When he was proudest of DeRozan:

It was against Cleveland a couple of years ago – not even in the playoffs – we beat them like two years ago and he guarded LeBron. He took on the challenge on defence and took his game to another level that day.

On what bugs him about DeRozan:

He gets on my nerves every day, but I love him.

On telling Lowry his new contract was done:

When I told him, he said, "I'm golfing right now; I'll call you later!" Then he said, "Congratulations, I'm real happy for you," but he was definitely golfing somewhere. It wasn't too much of a big deal because we talk every day. He wasn't surprised that I signed, obviously.

On their late-night talks:

Sometimes our late-night FaceTime calls are just friendly. Sometimes we talk business, advice, basketball – such a variety of things. Some people you call for a reason – you know the origin of it and where the conversation is going to go. But with Kyle, sometimes he just has a joke to tell me. You just never know where it will go, and that's what I actually cherish most about our conversations.

On meeting up at the gym for late-night workouts:

That's always been our routine. We're just looking for peace of mind really. We [don't] want to work with [anyone] else in the gym. We get the most out, mentally and physically, at those times. Those late nights vary, but for the most part, we just want to get the work in. We work for this so we understand, "Look don't be surprised once the results show." It's not once in a blue moon for us – we do it consistently throughout the year.

How the friendship began:

I couldn't tell you the moment I first considered him a friend. His first year here, I rarely talked to him. He's an interesting character, but once you understand him, he makes sense.

How he describes Lowry:

He's the very definition of a friend. He has very serious moments, joking moments, and bad mood moments. I don't look at him as Kyle Lowry the basketball player; I look at the guy I hang out with outside basketball. That's my man.

On the closeness of their families:

My daughter just calls him "Karter's Daddy." She's in love with Karter; they're best friends. So Kyle to her just means Karter must be around too. Those two kids – it's amazing to see them together in the room after the games, doing activities together.

His favourite thing about Lowry:

How he reacts when I aggravate him.

What aggravates him about Lowry:

Once he sees I'm no mood for him, he'll chastise me.

I'd put his basketball IQ in the top tier of the league. Chris Paul, LeBron James – you have to put Kyle up there with them.

On going to baseball games together in Toronto:

We never talk about basketball when we go to a Blue Jays game together. We love it. We just want to feel like the other 50,000 people in there watching. We want to enjoy the night and root on another professional who is doing something we don't know how to do. Every time Kyle and I have had a chance to meet another Toronto athlete, we love it, it's awesome. Meeting Marcus Stroman, Jose Bautista, it's a big deal to us, because we do feel like one family with them.

We never talk about contract status at all during the year, Kyle and me. We really don't. We want the obvious stuff – the stuff on the court – to speak for itself. 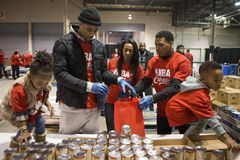 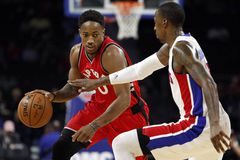 Raptors’ DeMar DeRozan hits the books to up his game
September 27, 2016 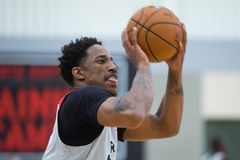