Kyle Lowry was already ill, then he was injured.

Neither was going to keep him off the floor with the Toronto Raptors badly needing a victory.

Lowry finished with 15 points, 11 rebounds and 11 assists for his ninth career triple-double, as the Raptors beat the Brooklyn Nets 103-95 on Sunday.

Already feeling sick, Lowry needed four stitches after cutting his right forearm on a camera mounted to the basket stanchion. But he played more than 39 minutes and recorded his first triple-double of the season.

Playing again without leading scorer DeMar DeRozan, the slumping Raptors ended a two-game skid and won for just the third time in 11 games. Jonas Valanciunas led the way with 22 points.

Terrence Ross had 17 points for the Raptors, who extended their longest winning streak ever against the Nets to eight.

Brook Lopez scored 20 for the Nets, who had 16 turnovers in the first half and finished with 22. They have lost nine in a row overall and 12 straight at home, where they haven't won in 2017.

"I thought in the second half we improved," coach Kenny Atkinson said. "That's why we gave ourselves a chance, because our defense was not great but decent enough to have a chance to win the game."

Brooklyn cut a 17-point deficit to four midway through the fourth quarter but Lowry soon took over, throwing a lob to Valanciunas for a basket, making a pair of free throws and then finding DeMarre Carroll for a basket that pushed the lead back into double digits at 92-82.

DeRozan has missed seven of the last eight games because of right ankle injuries during a frustrating time for the Raptors, who snapped a five-game road losing streak.

"Good teams, bad teams, whatever it is, frustration's a part that you've got to fight through as a team," coach Dwane Casey said.

Raptors: Lowry finished 0 for 5 from 3-point range staying at 799 3-pointers in his Raptors career, two behind Morris Peterson's franchise record. ... Patrick Patterson also sat out after leaving Toronto's loss in Orlando on Friday with a bruised left knee. He has missed 11 of the last 20 games with knee injuries.

Nets: Lopez entered averaging 21.7 points against the Raptors, second-highest among Nets players with at least 10 appearances. Former Toronto star Vince Carter averaged 23.3 in 18 appearances after being traded to the Nets. ... Rookie Caris LeVert sat out to rest his sore knee.

The Raptors' struggles cost Casey a chance to coach the Eastern Conference at the All-Star Game. The coach whose team had the second-highest winning percentage through Sunday's games – Cleveland's Tyronn Lue is ineligible after coaching last year – earned the spot, and Boston's Brad Stevens clinched it Friday. Casey said he was disappointed, but only because that meant the Raptors weren't playing well.

Raptors players and coaches looked around in confusion during the singing of Canada's national anthem, as Broadway performer Amber Iman included some lyrics that aren't in O Canada.

"I'm going to leave that alone, but yeah, that anthem was a lot different than I've heard over the last five years. A lot different," Lowry said. "Her voice was beautiful but the anthem, the song, the words ... have her come to Toronto, we'll come and get somebody to give her some lessons."

Raptors: Host the Clippers on Monday. Los Angeles won the first meeting this season after the Raptors won the previous four.

Nets: Travel on Tuesday to Charlotte, where they have lost three in a row. 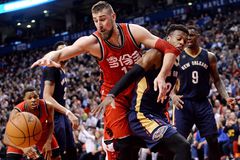